Dear Rose Lerner, What a delight it was to get your email telling me you had a new book coming out and would I like a copy for review. Of course I said yes – I’m not silly! Sailor’s Delight is a queer (male/male) romance, a novella (on the longish ... more > 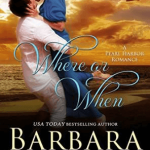 REVIEW: Where or When – A Pearl Harbor Romance (Home Front Book 3) by Barbara Bretton

She was everything he’d ever wanted . . . He was everything she’d dreamed of. It is 1941 and Pearl Harbor on the island of Oahu is as close to paradise as you were likely to get. Golden sunshine, sweet ocean breezes, secluded beaches made for romance. Pearl is a ... more >

Dear Ms. Kelly, Somehow I got the setting/era for your latest novel, “Marriage of Mercy” completely turned around in my head, thinking that it was going to be set on the American Western Frontier. Then when I went back to the eHarlequin website to recheck the back blurb, I realized ... more >

Operation Petticoat (1959) Genre: War comedy Grade: B Since today is Veteran’s Day in the U.S. and Remembrance Day in many other countries, I decided to pick a film to pay tribute to those who’ve served. But I didn’t want preachy so that ruled out such things as “The Americanization ... more >

Dear Ms. Marshall, Hello down there in hot, steamy Florida. Lots of authors might choose various contemporary locations in that state for their books but I love that you’ve staked out early 19th century Florida and sea captains, privateers and pirates for yours. Then you smooth on a layer of ... more >

Dear Ms Ross, Some of the other DA reviewers talk about how certain authors and their books are like crack. As soon as the next book is out, it’s in their hot hands and being devoured. I prefer to compare such books to potato chips. I open the bag and ... more >