Warning: mysqli_query(): (22032/3141): Invalid JSON text in argument 1 to function json_contains: "Invalid value." at position 0. in /home/customer/www/dearauthor.com/public_html/wp-includes/class-wpdb.php on line 2187
 REVIEW: Where or When – A Pearl Harbor Romance (Home Front Book 3) by Barbara Bretton
December 7, 2015

REVIEW: Where or When – A Pearl Harbor Romance (Home Front Book 3) by Barbara Bretton 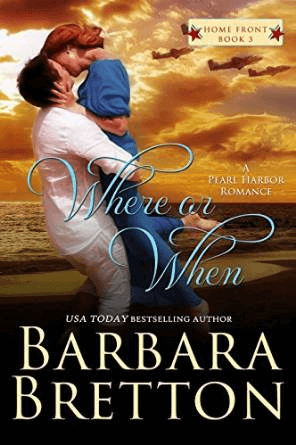 She was everything he’d ever wanted . . .

He was everything she’d dreamed of.

It is 1941 and Pearl Harbor on the island of Oahu is as close to paradise as you were likely to get. Golden sunshine, sweet ocean breezes, secluded beaches made for romance.

Pearl is a dream come true for Rick Byrne. A poor kid from the south side of Chicago, Rick joined the navy to see the world — and maybe one day own a piece of it. When the chance to drive for Admiral Forrester falls into his lap, he grabs for the brass ring even if it means squiring the admiral’s spoiled and beautiful daughter all around Honolulu.

Eden Forrester dislikes the brash young sailor on sight. For five weeks now she has been forced to rely on her father’s underlings to drive her around town while she waits for her broken leg to mend. A first-class flirt, she is accustomed to getting her own way with men of all ages, but her new driver seems immune to her charms . . . until one magical moment on a moonswept beach when the future is theirs for the taking.

But the world around them is growing more dangerous every day and on a beautiful Sunday morning in December, not even Paradise can save them from their destiny . .

Years ago I began reading the Harlequin American Romance “Century of American Romance” series. Yes, I’ve only read half of the books so far (yet one more thing to add to my “reading-to-do” list) but your two entries “Sentimental Journey” and “Strangers in Paradise” (now available in digital!) were among the favs so far. When I saw this new book (that will make this a trilogy) I scurried to buy it. It’s the “south side of Chicago,” which we all know from “Leroy Brown” is the baddest part of town, vs “daddy’s spoiled Princess.”

In the beginning, Eden is actually not a very likable person. She’s been spoiled by her widowed father, who wouldn’t have had a lot time to spend with her while she was growing up as he’s career Navy. She’s never had to worry or lift a finger – except to go shopping, and is used to getting what she wants. But she is what her upbringing has made her since her mother died when Eden was young and her father didn’t know what to do with his beloved daughter when she cried or was unhappy other than give her something. She can be a pill but she’s also 20 years old and immature.

On the other side of the coin, Rick is as driven as driven can be to escape the poverty of his childhood and make something of himself. One day he’ll be one of the officers living the good life. If he has to kowtow to Princess, he’ll grit his teeth and get on with it. Each takes an instant dislike to the other which as romance readers know is the opening salvo to a relationship.

Eden and Rick move fairly quickly past initial appearances and impressions when Rick sees Eden help her sister-in-law out of a tight spot. Then they lose their tempers and actually exchange some personal information. White hot kissing follows which rocks everyone’s worlds but with a heroic surrender to blue balls, Rick manages to keep things from going past the point of no return – not that inexperienced Eden really understands. I did worry that her gauzy dreams of love were only because she’d never had a relationship that physical before but time is allotted in the story plot for them to actually get to know each other and their dreams and hopes. Rick of course, in that way of men, is determined to make something of his ambition to get into officer’s training school before asking Eden for anything permanent.

Eden’s older brother is married to a Japanese-American woman. Lilly is perfect. Almost too perfect in that her only character fault, if this could even be called one, is to good naturedly envy Eden’s artistic ability. I find myself disturbed by this slightly caricatured version of the smart, polite SE Asian. Even the oh-so-politely barbed insults aimed at her by the snotty Naval wives don’t make Lilly respond in kind. At least she isn’t ever described as exotic.

The days count down to early December but beyond the rumor mills churning out warnings of imminent conflict, there is – as there should be – nothing blaring that Eden and Rick have to be worried about any immediate danger. Eden’s got the whole Scarlett O’Hara “war, war, war” and “I’ll think about it tomorrow” thing going, much to her father’s frustration. One part of the book I loved was the father/daughter relationship here. Owen Forrester knows his daughter well and when he helps her to understand what she wants out of her relationship with Rick and prepares to lose his baby to another man in her life, I did get a little teary.

The third act conflict between Eden and Rick is genuine and builds on how they’ve been presented through the whole book. No “out of the blue” nonsense just to extend the page count. It also factors in the stage of their relationship and that they’re just moving past love struck and heading towards every day reality. Each says some harsh words but when night falls and the dust settles, they both truly think about what the other said and face some realisms about themselves. This is what I like to see – characters who actually mature and change and are honest with themselves.

And that’s when the plot arrives at 07:30, Sunday December 7th and the bombing begins. I certainly didn’t expect the long awaited climax of the story to occur in the manner it does but it all makes sense and fits with the story so far. Kudos for showing it and the aftermath from a different but still respectful perspective.

This is a good addition to this series and I’m happy with my purchase. Since it doesn’t seem to tie tightly in with the other books beyond the time period and the war, readers can start here if they want. I’d also recommend the other books too. B