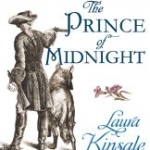 The Prince of Midnight by Laura Kinsale

Dear Ms. Kinsale: Once upon a time your historical romances were the standard against which I measured pretty much ALL romances. Your books dominated my top ten list; heck, I could have practically made a top ten list from Laura Kinsale titles alone (if I’m calculating correctly, nine of your ... more >

What do you do if you come face to face with a ghost? Put it down to a bump on the head and work stress if you’re a respected academic like Cleo Carpenter. With Christmas approaching, professional rivalry afoot and a best friend determined to interfere in her love life ... more >

REVIEW: In the Fields by Willow Aster (and October Book Club pick)

Dear Ms. Aster: Because of the emotionally moving content and the type of story, an interracial romance set in the 1970s South, I thought this would be the perfect October book club read for Dear Author. It’s possible that this book is overtly racist and that I should have recognized ... more >

REVIEW: Into the Deep by Samantha Young

Dear Ms. Young: When I saw you had a self published New Adult coming out, I was pretty excited because my reading choices have been somewhat lackluster and your previous two contemporaries were both emotional, sexy reads. In Down London Road, you took a character that I’d previously been unenthused ... more >

REVIEW: The Redemption of Callie & Kayden by Jessica Sorenson

Dear Ms.Sorenson: This is the follow up to the cliffhanger released earlier this year, The Coincidence of Callie & Kayden. This makes my third read of yours, the first barely esccaping a DNF, the second being a surprising emotional read that I highly enjoyed, and the third somewhere in between. ... more >

GUEST REVIEW: O that I were a glove upon that hand: Lord of Scoundrels by Loretta Chase

Housekeeping: Based on comments, and Twitter, and everything wah, I’ve compiled the Big List of Awesome, which is – to the best of my ability – all the recommendations, suggestions and ideas that have been thrown my way. The order is largely arbitrary. I tried to prioritise things that accumulated ... more >