Warning: mysqli_query(): (22032/3141): Invalid JSON text in argument 1 to function json_contains: "Invalid value." at position 0. in /home/customer/www/dearauthor.com/public_html/wp-includes/class-wpdb.php on line 2187
 The Prince of Midnight by Laura Kinsale
March 25, 2016

The Prince of Midnight by Laura Kinsale 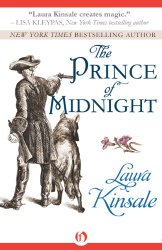 Once upon a time your historical romances were the standard against which I measured pretty much ALL romances. Your books dominated my top ten list; heck, I could have practically made a top ten list from Laura Kinsale titles alone (if I’m calculating correctly, nine of your twelve romances were written by the time I started reading the genre regularly).

Romance has changed, of course, in the twenty-(cough)-years since I’ve been reading it, and my recent experiences with historical romance (and by recent, I mean, at least the last three years) have been uneven. A while back, though, I picked up The Prince of Midnight (as a Daily Deal? Probably as a Daily Deal. I live by those things). I am not much of a re-reader; I haven’t been for decades But it’s been so long since I’ve read The Prince of Midnight that it was *almost* like having a new Laura Kinsale to read, and that sounded pretty good to me.

Ex-highwayman S.T. Maitland is living in a ruined castle in the foothills of the French Alps when Leigh Strachan tracks him down; the year is 1772. They first meet in the village pub, and he mistakes her for the young lad she’s dressed as, but soon enough he uncovers her gender and her reason for seeking him out.

Leigh’s history is one of the most tragic I’ve read in a romance. I’ve read about other heroines who have lost their whole families, but the way Leigh loses hers, one by one – to two separate murders, a suicide and finally a tragic accident – struck me as intolerably cruel; almost like something out of a horror movie. It’s a testament to Leigh’s strength that she is able to put one foot in front of the other, take herself to France, and track down the elusive Seigneur du Minuit – the Prince of Midnight – in her quest for revenge.

The Seigneur plied his trade in England as a highwayman several years before, and earned a not-entirely-deserved reputation as a hero of the common man – if not quite a Robin Hood, at least he stole from the rich, and did it with panache. But S.T. has been in exile ever since an ex-lover set him up for capture by British soldiers. He got away, but he lost his beloved horse, the hearing in one ear, and, literally, his equilibrium. S.T. suffers from terrible vertigo.

S.T. is not what Leigh expected. At first, he plays the buffoon, pretending not to know who she’s looking for (there’s a price on his head, after all). Then she begins to realize that he really *isn’t* who she’s looking for – at least not anymore. He hides his partial deafness from her, but he can’t hide the loss of skills that are the result of his ruined balance. She could deal with his attraction to her – Leigh is so coldly single-minded in her goal that she doesn’t mind bartering her body for help (though his romanticism makes S.T. seem frivolous and silly to her). But his condition means that he’s entirely useless for her purposes.

It was never entirely clear to me what Leigh wanted from S.T. – she claims to have sought him out so he can teach her swordplay, but the idea that she expected him to come with her back to England and act as her champion always seems to have been in the back of her mind, at least. Once she realizes he’s not suited for either task, Leigh is ready to leave France immediately, but first she falls deathly ill from a fever she caught on her journey there (S.T. nurses her back to health) and then she finds that he’s not that easy to get rid of. He’s both infatuated with her and with the idea of playing the role of savior; of proving something to himself, to Leigh, to the world. Soon enough, Leigh, S.T. and his pet wolf Nemo are on the road. (Kinsale books always feature some sort of animal mascot prominently, and Nemo is particularly lovable – a wild wolf, yes, but submissive to S.T.’s alpha and peculiarly terrified of women. He only gets over his fear of Leigh when he decides that she’s part of their pack.)

What awaits them in England is very dark indeed. The Reverend Jamie Chilton came to the town of Felchester where Leigh and her family once lived in tranquil gentility. Leigh’s father was the local magistrate as well as the pastor; the family were gentry due to the unexpected inheritance of an earldom. Once Chilton came, though, things began to change. He opened a school and home for wayward girls, and began to convert locals with his fiery speeches and evangelical fervor. Leigh’s mother spoke out against Chilton and some of his more unsavory teachings (his views on women were rather retrograde, even for the 18th century). His acolytes respond with rape, assault and murder. When only Leigh and her mother were left, they tried to flee the town, but it was too late. Leigh’s mother died in a carriage accident, and Leigh was left utterly alone.

I was curious about the background of the cult depicted in The Prince of Midnight – I feel like maybe there was an author’s note about religious movements of the time in the original copy? (I have the paper version around here…somewhere.) The group comes off a tad fantastical at times; even in that day and age, and in a relatively isolated village, it seems odd that murder and rape could occur and Leigh’s family would have no one to turn to for redress. They were gentry, after all. But it’s in keeping with the dark, nightmarish quality that the book often has.

Once in England, S.T. and Leigh bicker and he works on his plan to destroy Chilton. I was a bit ambivalent about the way this all played out – after all that had happened, I wanted Leigh to be more than a damsel in distress who needed a man to both right her wrongs *and* save her. Not just because that type of character isn’t exactly my favorite sort of heroine, but because S.T. himself has a weakness for playing the hero. It’s a weakness that Leigh distrusts, and I, as the reader, did too.

Leigh and S.T. have an unusual relationship for a romance – he insists he’s in love with her while Leigh, numbed by loss, insists she can’t give him anything but sex. She also distrusts (with good reason) S.T.’s version of “love”, which is long on flowery declarations and extravagant gestures, but historically short on staying power. S.T.’s been in love a LOT, and Leigh can be forgiven for seeing him as callow. S.T., though, is determined to prove himself to Leigh and to slay the metaphorical dragon for her.

The thing was, though, often S.T.’s need to prove himself seemed to have to do more with himself, his ego, and his self-image than with Leigh’s wishes or well-being.

S.T.’s portrayal is one of the strengths and weaknesses of the book. On the one hand, I love the fact that Kinsale heroes aren’t cookie-cutter swaggering he-men who just need a good woman to teach them to love. S.T. had been shallow and selfish and fallen in and out of love with startling regularity; even in his present incarnation he preens at the attention of the young women he saves from the Reverend Chilton. I liked that he had these flaws, but at the same time when he doesn’t really change – as flawed heroes are expected to change in the course of a romance – I found myself almost as frustrated with him as Leigh was. How could she (and I) believe in his love when he was just repeating patterns he’d traced a dozen times before?

Leigh is also an unusual (though not unique) heroine – she’s the type of heroine who has the qualities more often found in a hero. She’s cold, angry, and thinks herself dead inside. She lives only for revenge. She doesn’t believe she’s capable of love but will use her body to get what she wants from S.T.:

“You want an illusion.”

He opened his eyes. “I love you.” When he said it, gazing at the perfect lines of her face, it seemed so true. “From the instant I saw you.”

“You want to bed me. I won’t forestall you.”

“I want your heart–to hold and cherish.”

She looked away from him. “You’ve been wasted as a highwayman. I believe you might have made quite a torrid troubadour.”

Damn her. It wasn’t going properly. She wasn’t responding the way she ought at all.

The Prince of Midnight was not my favorite Laura Kinsale title back in the day; it would probably be closer to the bottom of the list than the top. But again, that’s judging against other Kinsale titles rather than romance as a whole. My main, though hazy, recollection of my issues with the book, such as they were, had to do with it being excessively dark. Of course, Kinsale books in general lean towards the dark and angsty (though there’s a lot of wonderful humor in them, as well). So for me to think that one was *too* dark meant it was grim indeed.

On rereading it, though, maybe because I expected the darkness, I was less disturbed by it. My main negative was, again, the uneasy balance between feeling like S.T. was believably flawed in his impetuous romanticism, and feeling that the HEA wasn’t entirely satisfying, because he never really changed. Oh, I believed that he would stay in love with Leigh, but I wanted the denouement of the fight with Chilton to be different, and even afterward it was Leigh who ended up having to give more in order to bring them together.

Still, it’s a beautifully written book with a compelling hero and heroine, so my grade for The Prince of Midnight is a straight A.

(One final note: I was annoyed that the Kindle version of the book contained numerous typographical errors. I want to collect the other Kinsale books on Kindle, but I do hope they’ve been edited more assiduously.)