REVIEW: In the Fields by Willow Aster (and October Book Club pick) 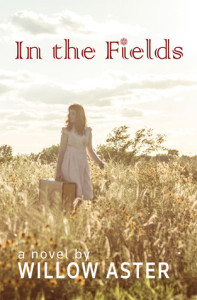 Because of the emotionally moving content and the type of story, an interracial romance set in the 1970s South, I thought this would be the perfect October book club read for Dear Author.

It’s possible that this book is overtly racist and that I should have recognized it.  There are a few elements that bothered me, but more from a story telling aspect rather than from a racial sensitivity. Another reader may have a totally different perspective which is why I thought it would make such a good book for discussion purposes.

The story spans six years (but seems much longer)  from 1971 to 1977. In 1971, Caroline Carson lives with her alcoholic father and her former beauty queen mother in Tulma, Tennessee.  She knows that her parents wouldn’t approve but Caroline’s favorite person is her classmate, Isaiah Washington.  Isaiah is black and her parents tell her that they stick with their own kind. But Caroline doesn’t really understand why so she continues her friendship which primarily consists walking home from school with Isaiah and talking to him on the phone.

Caroline’s life isn’t easy. Her mother is often gone and one day her father disappears and just doesn’t come back.  Then she comes home and her mother is gone.  Caroline has no money and her refrigerator is getting empty.  She finally goes and gets a job cleaning the kitchen at a local diner where she is at least fed.  Pretty Caroline is alone in the world and she’s attracted the attention of some unsavory elements of Tulma which leads to disastrous consequences.

Caroline spends much of the book being abandoned and finding help in the form of kindness of strangers of both races. Caroline is a plucky heroine but I don’t get the sense that she survives without the assistance of several different people. I wasn’t sure whether that was the theme of the book? I felt like it was an unintentional one if it is.


As it relates to the race issue, it’s part of Caroline’s life but she doesn’t internalize it. I wasn’t sure if that was overly optimistic given her experience and upbringing. Her parents, particularly her mother, is at least a casual racist if not an overt bigot.  That Caroline was able to break away from that while living in her small southern town is rather remarkable.

Over all, this is an emotionally moving story but it ddid rely on using several dramatic episodes to power the story rather than actual character development.  I didn’t feel Caroline was a different person at the end of the story as she was in the beginning of the story. She was a sweet, loveable girl and grew into a sweet loveable young woman.  I have an affinity for southern fiction having spent many an hour in my late teens reading Deborah Smith.  Caroline says “the humidity was so thick you could bounce it like a ball.”  Early attraction between Isaiah and Caroline is innocently but believably described:

I barely see Isaiah today. In gym, we take a break from the waltz and are divided into teams for dodge ball. I was hoping to have a little chat with Isaiah, but instead I’m running for my life to avoid the ball. He’s on my team, so we’re in close proximity, but neither of us speaks to the other. It’s hard to not stare at him, but I try to save all my looks for our walk home.

I appreciated it didn’t shy away from incidences of racism but told a fairly even handed story of evil coming from both sides, no matter the color.  One knock could be that the people of color that Caroline meet are primarily working class – construction, cooks in restaurants, seamstresses while the white people are bankers, owners of motels, former doctors.  It could be that was the product of the time – 1970s South – but perhaps the depiction of the socio economic situations of the classes could have been more even handed but I felt like that is kind of nit picking.

The biggest drawback of this story was that there isn’t a ton of romance in it and that while there are few point of view scenes from Isaiah, he pretty much sounded exactly like Caroline. His scenes were far less effective.  The sexual tension in the story is fairly low and it’s definitely a closed door romance.  Still I want to see more stories like this in romance.  C+

I hope Dear Author readers will join me on October 15th when I’ll host a book chat on this book.