REVIEW: The Redemption of Callie & Kayden by Jessica Sorenson

This is the follow up to the cliffhanger released earlier this year, The Coincidence of Callie & Kayden. This makes my third read of yours, the first barely esccaping a DNF, the second being a surprising emotional read that I highly enjoyed, and the third somewhere in between. 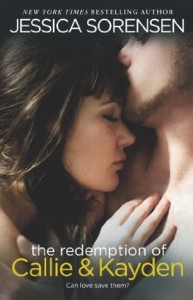 The Redemption of Callie & Kayden picks up after The Coincidence. Kayden is in a hospital with threats of assault charges looming and several cuts in his body. Did he self injure or where those cuts the result of his father’s abuse. It’s not far fetched to be believed that Kayden is the perpetrator of his own wounds. His arms are marked with evidence of his past cutting. This rings a little problematic for me. Kayden is supposedly a star football quarterback. I had a difficult time believing that his arms, so often in view, would not be noticed by any one else from his coach, Callie’s father, to any number of teachers and supervisors at high school and college. And no, I don’t believe there is any reference to him wearing long sleeves in his uniform all of the time. But, nonetheless, setting that aside, the first 7 chapters of this story really dragged for me.

There is a lot of internal kvetching over Callie and Kayden’s past traumas. Yes, they are sorely damaged. Yes, it makes sense that at this age, their internal monologues would be drawn out and full of angst. It is why I was so drawn in by the first one.

But there is so little dialogue and action in the first seven chapters that I struggled, for days, to make it through. Finally, I forced myself to sit down and finish the book. At about the eighth chapter, stuff begins to happen and by stuff, I just mean that there is actual movement on the page. Instead of just being immersed in the thoughts of each character, they are actually moving their limbs and doing something.

This entry doesn’t progress the story very far. Kayden and Callie both make confessions about their past, but their trauma is so deep that the only obvious thing is that their path forward is quite cloudy. Both need a boatload of therapy and while some of it starts in The Redemption, they both still have a long way to go in terms of becoming emotionally healthy. There really is no plot. It’s a character driven, emotionally over the top story which revolves almost solely around whether Kayden and Callie can harness their negative emotions and stick with each other.

This story had far too much introspection and most of it was repetitive. Kayden hating himself and not believing he was good enough for Callie and Callie struggling with how she could confess what happened to her.

There is almost no resolution to this Kayden and Callie’s story and I think the unfinished nature along with the slow progression was just frustrating. It’s an emotional read, but not as powerful as the first entry, and while the deep immersive POVs worked previously, I found my attention quickly wandering. It is a must read for those who enjoyed the first book but I wouldn’t pick it up by itself. C

→ Jane
Previous article: REVIEW: Run to You by Charlotte Stein
Next Post: Friday News: What are you looking for in an HEA; Vonnegut Estate offers up books to fan ficcers; Selfish and mean folks don’t win, in the end