REVIEW: Into the Deep by Samantha Young

When I saw you had a self published New Adult coming out, I was pretty excited because my reading choices have been somewhat lackluster and your previous two contemporaries were both emotional, sexy reads. In Down London Road, you took a character that I’d previously been unenthused about and made her into someone I cared and cheered for. 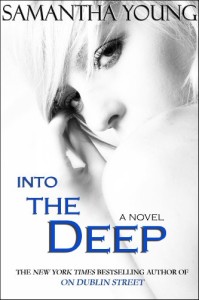 Your previous books have been very female positive with no slut shaming or running down of other women for their clothes or their sexual choices and Into the Deep is no different. However, what I really struggled with was the set up. Jake Caplin and Charley Redford were high school sweethearts and everyone who saw them, including Charley’s parents, believed that this was one teen relationship that would last. But circumstances make high school impossible for Jake and he breaks up with Charley, leaving her heartbroken.

Charley has never really recovered from this so when she sees Jake in Scotland during her study abroad in college, she’s shattered. Worse he’s not single. His girlfriend is with him and Charley tries to halt all the emotions she once felt for Jake from coming back and overwhelming her. But she is not successful.

In order to make it believable that two Midwestern kids reunite in Scotland, we are told that Jake knew of Charley’s plans to do this in college because she spoke of it often. Her sister studied abroad for a year and it was the highlight of her college life.

Jake, remorseful about the way things ended with Charley, planned to go to Scotland too in hopes of seeing her. While making those plans, Jake meets and falls for his current girlfriend.

I understood Charley and her determination to get over Jake, although it was incredibly hard when he shows up on her study abroad. It was Jake that was difficult to grasp. Why is he here in Scotland? to reunite with Charley? Why isn’t he single? And the whole time that Jake is dating this other girl, Jake and Charley are basically eye fucking each other and even taking it farther.

The setup reeked of artificiality. In order to create angst and a reason for continued separation, this other girl (a very nice girl) was inserted into the intense love connection between Jake and Charley. What is well done is the emotional and sexual tension between the two main characters (which also serves to make their separation all the more unbelievable).

The other part of the writing that I struggled with were the flashbacks. Why Jake broke up with Charley is revealed in a series of flashbacks retelling Jake and Charley’s initial teen romance. Not only were the flashbacks interrupting the present story in an awkward fashion but teen Jake was absolutely no different in tone and thought pattern as young adult Jake. (And frankly not very different than the older male characters in other Young books).

Unfortunately, Jake was hard to catch off guard. Rather than choke and get all turned on like any normal sixteen-year-old boy would, he just smiled like I amused him. “Baby, we ever really use cuffs, I won’t be the one in them.”

Now I was the one making strangled noises. “Jake!”

He laughed as he pulled into the school parking lot. “So?”

“It’s one thing to joke about it but another to actually … you’re like a thirty-year-old trapped in a teenage boy’s body.”

“Wow.” Jake stopped the engine and turned to me. “I did it. I finally got you ruffled. Over handcuffs.” He winked at me. “I’ll keep that in mind.” He got out of the truck before I could punch him in the arm.

The ending was abrupt and another book about Charley and Jake is due out in 2014. I didn’t find the ending to be too annoying because it was clear that there were a lot of emotional issues that needed to be sorted out. I’m interested in book 2 and the writing in Into the Deep is still strong, but the forced conflict, Jake’s behavior toward both girls, and the flashbacks reduced my enjoyment of the story. C+

→ Jane
Previous article: Managing your TBR pile with Calibre
Next Post: Monday News: Reporters beware, computers are writing your news now; Big books are back; Why I hate the strong heroine and more.