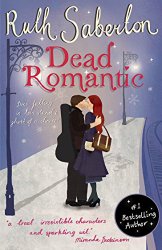 What do you do if you come face to face with a ghost?

Put it down to a bump on the head and work stress if you’re a respected academic like Cleo Carpenter. With Christmas approaching, professional rivalry afoot and a best friend determined to interfere in her love life the strain is clearly starting to get to her.

Guilt-stricken and deceased, Alex Thorne is desperate to make amends with his brother, Rafe, a tortured musician trapped in a spiral of destruction. When an encounter with Cleo forges a link between them she becomes his only hope. So what if the only person who can see him is a sceptic?

As Cleo starts to doubt her sanity, the safe world she takes for granted crumbles around her. Setting out to regain control and prove once and for all ghosts don’t exist, she embarks on a journey of self discovery and surprise, learning that love really does defy science, logic and maybe even death itself…

If it hadn’t been for a round up post at AAR about hidden 2014 gems, I would have totally missed this book which would have been awful. What a fun little story that turns out to make me think and feel a lot more than I would have imagined.

Cleo Carpenter is a very down to earth, controlled, even keeled kind of heroine who has a clear view of what she wants in life and a plan to get it. She’s got a great friend and flatmate, a job and career she loves, and the respect of her colleagues. She’s intelligent, has a sense of humor and hopefully will soon get a much deserved job promotion.

But all heroines need an Achilles heel and Cleo’s is the tragic, early death of her mother ten years ago. She can’t blame the cancer on her father but she does, in a way, blame him for not calling her in time so that she could get home from a dig in Egypt before her mother died on Christmas Eve. Instead, she had found herself waiting at the train station, desperately hoping against hope to reach her mother in time and sobbing into the arms of an unknown young man.

Now ten years later, suddenly all she can hear in the early days of December, when Londoners are beginning to gear up for the prezzie buying madness, is a depressing Christmas song about a man who meets and loses the love of his life at a train station after sharing one perfect kiss. Of course we all know who that young woman is but for now Cleo, having left the country again after her mother’s death, is clueless.

Then Strange Things begin to happen. Things for which rational Cleo manages to find explanations: her papers are stirred by draughts in her office, she has an old phone she accidentally knocks the receiver off of, her office is cold because it’s an old building. There are logical excuses for everything up until Cleo almost takes a header in front of a car and ends up knocking her head. Now she can see people. Dead people. One of whom is a rock star who needs Cleo to pass on a message to his guilt stricken brother whose life has spiraled down into booze and to whom Alex once made a promise to find the young woman Rafe fell in love with and wrote a song about.

Alex isn’t going to give up until he gets Cleo and Rafe together and gets Rafe off the benders which are destroying him. But will Cleo end up going around the bend from the ghosts? And even if she and Rafe find each other again, is it true love that will triumph in the end, or did they have but miss their chance for a HEA?

There are so many things I enjoyed here. Cleo is a rational woman after my own heart. When Alex shows up, Cleo tries to think her way out of this. Her head injury? Something she heard or read on the internet? Her flat mate who believes in psychics and reads paranormal books along with Mills and Boon? There must be some way to explain why she suddenly has a dead rocker showing up in the changing room with her at Topshop while she’s standing in her smalls. After all, Cleo has never believed in ghosts or the afterlife despite the fact that she’s spend her professional life studying people who did.

Alex “comes alive,” for lack of a better way to describe a ghost, as much as any of the live characters. Here is a man who truly is haunted by angst and regret – the same emotions that are tearing his brother apart due to a horrific row between them which was the last thing before Alex’s sudden death put reconciliation beyond them. Alex has been trying to get Cleo’s attention for ages and now that he’s got it, he’s not about to let up on her until he gets her out to see his brother. Usually angsty heroes are not a magnet for me so for this aspect of the book to work as well as it does, says something to me.

Brotherly love finally pays off with the long awaited reunion but the outcome wasn’t what I was expecting. Now this is just the time when a beautiful “At last! We’ve found each other and I’m instantly cure of the booze; please marry me!” scene might have been inserted. Instead, real life rears its ugly head and not everything is immediately hunky dory. In fact, Cleo is wishing she’d never listened to Alex even as a drunken Rafe announces that this meeting is ten years too late and will she get out.

Frankly I had no idea what would happen next and I was loving it. Meanwhile Cleo’s professional life begins to take a tumble and I had no idea how she’d deal with that snake in her life either. And she’s still seeing dead people.

So there’s the romance to be fixed, Cleo’s family life that was as devastated by her mother’s death as was that of Rafe by his brother’s, a dirty rat of an Egyptologist who appears to be winning the job Cleo should get, and dead people still looking for closure. And before the book is over, I believe in spooks, finding peace and acceptance, that a dead pharaoh and Victorian museum director can help right wrongs and in love at first sight with The One. An unfortunate Big Mis right at the end brings the grade down slightly, just because Cleo seems to lose her mind for a moment over it, but it still gets a B/B+ from me anyway.

→ Jayne
Previous article: Thursday News: Nora Roberts in the NYT, BEA is still too white, EverAfter free books, and “Fifty Shades of Buscemi”
Next Post: Reading List by Jennie for November and December