My June reading was a mixture of the good and the disappointing. Here’s what I read: 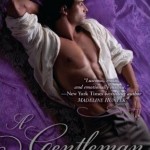 A Gentleman Undone by Cecilia Grant

I loved Grant’s debut, A Lady Awakened. This is the follow up, about the brother of the heroine from the earlier book, an officer in the Napoleonic Wars who sold his commission and finds it hard to reintegrate into society.

At a gaming club, Will meets Lydia Slaughter, card sharp and another man’s mistress. When he confronts her about her having cheated him of his winnings, he gets more than he bargained for, including lessons in gambling, and a gaming partnership meant to win Lydia her freedom and Will a much-needed redemption. From there on things proceed to a romantic relationship, though not in the usual ways.

I love the intelligence in this author’s voice, the specificity of her word choices and the freshness of her characterizations. I do feel that A Lady Awakened was a fuller (for lack of a better word) novel, with a greater range of emotional tones and a stronger sense of place. A Gentleman Undone had a moodier atmosphere, but there was so much I enjoyed in it, including that Grant does not shy away from showing the heroine not only engaging in but also enjoying sex with her “protector.” B+. 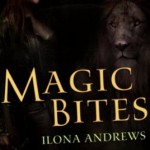 Magic Bites by Ilona Andrews
Having enjoyed reading all three of the books in Andrews’ Edge series with my husband, I suggested to him that we try Magic Bites, the first book in Andrews’ Kate Daniels series. I’ve had this book TBR for quite a while.

Unfortunately neither of us enjoyed this one anywhere near as much as the Edge books. The humor, charm, romance, and the fascinating contrast between two worlds that makes those books so much fun is missing from Magic Bites.

The heroine/narrator of the book, Kate, doesn’t show the same kind of wit I’ve found in Andrews’ other heroines, at least in this book. Both she and Curran, her eventual love interest, make some downright boneheaded decisions, and it was hard for me to care about either of them.

I’ve heard that the series gets better in later books, but if not for that, we might have stopped reading midway. We discussed quitting and came pretty close to doing so. There’s some snappy narration and a Buffyesque feel, so I can see that Magic Bites might have felt fresher when it first came out in 2007, but even so, it’s hard to understand how it made such a splash. Jane’s A- review can be found here. C-. 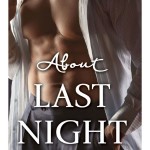 About Last Night by Ruthie Knox

What a charming book this was, humorous, romantic and emotional. Nev and Cath, both Londoners, see each other on the train they take from home to work, and while running in the park. But they don’t converse until Nev finds a drunk Cath in a tough spot and takes her home.

The next morning, Cath wonders if they had sex. Although though they didn’t, they do soon enough, and it’s the best sex either of them have had. But Cath is recovering from youthful mistakes and doesn’t want Nev to be another in a long series of them. Will Nev convince her that he could be much more?

I loved the characters in this one. They felt real to me. Cath is a transplant from America who works at an art museum and wears tattoos chronicling each lapse of judgment in her past. I didn’t judge her as she did herself, but I could see why she did, and I wanted her to forgive herself.

Nev is a sweetheart and an artist trapped in his job at his family’s bank. He does everything possible to get past Cath’s defenses and tries to prove himself to her, but he makes human mistakes along the way. Nev’s family could be horrible, but even so his parents felt believable to me. His brother was less so.

There is a huge grand gesture at the end of the book . I was doubtful that something like that could be pulled off in reality, but somehow it still melted my heart. It’s very rare for me to enjoy a straight contemporary this much, and I’m now looking forward to Knox’s Ride with Me. Jane’s review of About Last Night can be found here. B+. 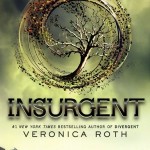 I loved Divergent, but was disappointed with its sequel. While I still liked Tris, I felt that with much of her toughness and all of her competitiveness stripped from her, her characterization became less compelling in Insurgent than it had been in the prequel. Meanwhile, the characterization of Tris’s boyfriend, Tobias, was marred by contrived conflicts with Tris.

I also noticed a lot of other contrivances and inconsistencies in the story, such as, for example, members of the Dauntless faction apparently not thinking to post sentries at a tall building they were guarding, since they did not see an attack coming, or member of Erudite not knowing how to manufacture Candor’s truth serum, which led me to wonder, who invented it for Candor?

When I’m distracted enough to wonder about such things, it’s a sign I’m not absorbed in the story. Jia reviewed this one (she liked it much better than I did), and I have a review in the works as well. Grade: C-. 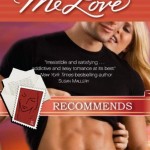 After enjoying About Last Night so much, I was in the mood for another straight contemporary (gasp) so I picked up Can’t Buy Me Love which has been strongly recommended by Janet/Robin. The enthusiasm in the comments was so great that I was hopeful I would enjoy it even though I rarely enjoy the sports trope, don’t love Texas as a setting for books, and as a vegan, can’t get excited about the leather clothing the heroine designs.

I ended up feeling torn about this book. On the one hand, I appreciated that O’Keefe tackled flawed characters and portrayed them with honesty. We need more of that in the romance genre. As Robin points out, the reality of sports injuries wasn’t sugarcoated, and that was another thing I appreciated. I also liked the heroine, Tara Jean, for her courage and pluck. I kept reading to see how her happy ending would come about.

On the other hand, the hockey-playing hero, Luc, did not jell equally well for me. He started out so angry and misogynistic toward Tara Jean that I had a hard time fully buying his sweetness toward her and his worry for her later on. I kept waiting for the guy with the anger management issues to make another appearance in their relationship, and I also didn’t understand how he maintained such calm control on the ice.

The characterization in this book reminded me of SEP’s pre-Avon writing and of other books I read in the late eighties, American romantic sagas whose characters were larger than life but still messed up and flawed. I am glad to see that kind of character development being brought back, but because I read a fair number of books with characterization in this vein as a kid, it didn’t feel as fresh to me as it might to some other readers.

I also found myself wishing the characters had not been based in stereotypes – the competitive athlete, the trashy girl from the trailer park, the spoiled socialite, the taciturn cowboy, the poised former model. While I appreciated that the main characters were full enough to be more than these stereotypes, and that in particular, Tara Jean’s growth was lovely and convincing, I was also hungry to encounter a character who wasn’t based in a type at all.

Between that and my issues with Luc, as well as some hiccups in the prose, I admired the thoughtfulness that went into this novel more than I enjoyed reading it. It’s hard to know what to grade a book I feel that way about, but maybe a C+/B-?

What about you guys? How was your June reading-wise? Have you read any of the books I mentioned above, and if so, what did you think of them?