I read and enjoyed your debut novel, Divergent, when it first came out. In a post-Hunger Games literary landscape where there are many followers but few contenders, I found that I enjoyed it a great deal. It was one of the better dystopian YAs to come out in recent years, and I’ve been looking forward to the continuation of Tris’s story for months. 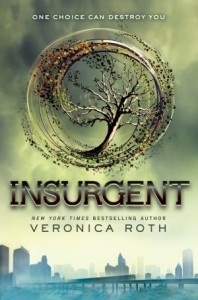 Insurgent picks up immediately after the events of Divergent. The balance of power between the five factions has shifted with two, Erudite and Dauntless, forming an alliance to attack Abnegation. Tris, Four, and their companions have fled, seeking safety from the two remaining factions — first Amity, and then Candor.

Safety, unfortunately, is difficult to find. Though Tris and Four are part of Dauntless, they are known to be Divergents: people who exhibit traits from more than one faction. This makes them walking targets because Erudite would want nothing more than to get their hands on them. After all, it’s a problem when your mind control drugs fail to work on a growing segment of the population. If Erudite can perfect the drugs’ effect on a Divergent mind, then their control will be absolute.

Left with no other choice, Tris and her friends must ally themselves with people from Four’s past. But the repercussions of those newly forged relationships may have consequences that are far more reaching that anyone could have expected.

Insurgent has some of the best action-based pacing I’ve seen in a long time. In the YA genre, the narrative often lapses into long passages of introspection and brooding. I suppose it goes hand in hand with the coming of age angst expected of the genre, but it can get monotonous after a while. Not so here. It’s true that there are those moments in the book but the plot moves relentlessly forward, and I liked that.

Tris and her friends are on the run. They’re actively being hunted, and people are being hurt in their place. Every decision, choice, and mistake has consequences — some of which are dire. There is no time to brood and ponder everything that happened. If readers are expecting a detailed recap of the events that happened in Divergent, they won’t find it. This book dives right in and gets going at full speed. People used to being eased into follow-ups might find this a bit jarring. I thought it was refreshing.

I liked that the events portrayed in Divergent left their mark on Tris. She was deeply traumatized by everything that happened, and I often feel that we don’t see enough of that in the YA genre. Not to the extent that the subject matter deserves. Tris was forced to do some terrible things, and the book doesn’t prettify or soften it.

She grieves for her parents. That emotion colors almost every choice she makes in the book. Can she live up to their legacy? She’s also trying to cope with the guilt of having to kill a friend. I thought her emotional turmoil over that and how she’s unable to talk about it with anyone was very realistic. How can she tell others that she killed one of her best friends, even if it was in self-defense? She fears how it will affect their opinion of her. Some people may consider that cowardly; I don’t because she’s lost so much already. I don’t think she can stand to lose much more.

To me, Insurgent was refreshing in that it allowed Tris to have that weakness and that ugliness. So often we are given protagonists with “flaws” that barely qualify. But while Tris is strong, she is also imperfect and that was shown so clearly here. She hides what happened because she can barely accept what happened herself. It left a tangible mark upon her. She can’t even lift a gun without panicking or freezing. The death left a visible scar on her psyche. I thought her PTSD was depicted in a way that was both accurate and non-stereotypical.

What was even more refreshing was that the romance between Tris and Four (aka Tobias) remained a romance only between Tris and Four; no love triangle need apply. Thank goodness. One of the things I always want to see more of are romantic relationships after the couple has gotten together. At the same time, I acknowledge that it’s difficult to keep the romantic conflict interesting after the tension of will they or won’t they? has been resolved. But I thought the book did a great job of doing exactly that without introducing a third party into the equation.

Tris’s inability to communicate, especially in the wake of her trauma, puts a severe strain on their relationship. As to be expected, the events of Divergent changed her and change in a person can affect relationships of all types. The trust between Tris and Four is put to the test.

This is further complicated by the presence of Four’s parents. In a reflection of Tris’s parental loss in the last book, Four is reunited with both of his in this one. What’s even more interesting is that he doesn’t really trust either of them but the one he trusts more, Tris does not and the one he hates, Tris finds herself conspiring with. Four keeps secrets from Tris, just as she keeps secret from him. Normally, this type of dancing around irritates me but it worked in the context of the book.

On the other hand, while I liked the action-plot focus of the book, there were times where I just wanted a second to breathe. The relentless pace sometimes made for a choppy, disjointed read. I’m sure that was intentional for the most part, but it’s not to everyone’s taste.

A word of warning to readers: I thought the book ends in the right place but it’s a cliffhanger. A big revelation comes at the end and it’s a game-changer. As I said in my review of Divergent, you have to accept the premise as a reader and go with it. Don’t examine it too closely because like many other YA dystopians, it won’t hold up. But I will say that the final revelation in this book sheds light on the original premise. I won’t go as far as to say it’s a good explanation but it works within the context of the book.

All in all, I thought this was an excellent follow-up to last year’s Divergent. It didn’t quite hit me the same way its predecessor did, but I didn’t find this to be the sophomore slump that plagues so many series out there. And it’s nice to read a book where character is fully revealed through action and choice rather than narrative exposition. B

→ Jia
Previous article: Memorial Day Links (and Deals): A LipDub Proposal, Ways to Donate Books to the Troops, and a Recommendation
Next Post: Guest Post: My Self Publishing Journey by Sarah Mayberry