REVIEW: On the Edge by Ilona Andrews 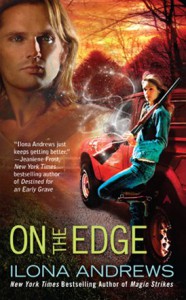 On the Edge was the first of your books that I’ve read, but it will not be the last.

Rose Drayton and her two young brothers, Jack and Georgie, live in the Edge, an area where two dimensions known as the Weird and the Broken overlap. In the Weird, people have magical abilities and magical creatures exist there as well. The Broken is our world, where no one possesses magic.

Rose and her brothers do have special abilities, and in Rose’s case, hers are powerful enough that men from both the Edge and the Weird want to marry her in order to make use of her gene pool. Rose has refused all these offers in no uncertain terms.

Since her mother died and her father abandoned her family, Rose has been raising Jack and Georgie. To support the boys, Rose works as a cleaning lady in the Broken. She has to save every penny just to buy Jack shoes, and between his shifting and Georgie’s raising creatures from the dead at the expense of his own health, she has her hands full.

One day an earl from the Weird turns up on the Draytons’ doorstep. The man, who goes by the name of Declan, wants Rose to come away with him to the Weird. Declan possesses powerful magical abilities and can therefore do Rose a great deal of harm, so Rose cuts a deal with him. She will issue Declan three challenges and if he completes all of them successfully, she will go with him. If not, Declan will go away and leave Rose and her brothers in peace.

Shortly thereafter, Rose loses her cleaning job through no fault of her own. Because the household is in desperate need of money and because Declan rescues Jack from two menacing magical creatures which he calls hounds, Rose agrees to let Declan stay under her roof in exchange for a gold coin a day.

Rose soon finds herself attracted to the handsome and clever Declan but she mistrusts his motives. The boys, who have no male figure in their lives, begin to look up to him. As the four of them join forces to fight the dangerous hounds, the connection between Declan and the Draytons deepens.

While I liked them both, at first I felt that Rose and Declan were a little too good to be true. As I kept reading, though, I began to see that they had a few limits and flaws. Rose is stubborn and mistrusting where men are concerned, though she has good reasons to be that way. Declan isn’t always as upfront as he could be, though he too has his reasons.

It takes a little while for the story to get rolling and for Declan to appear, but the wait is worth it. The romance between Rose and Declan echoes fairy tales and folk tales, while at the same time being refreshingly grounded in the reality of Rose’s daily struggles to make ends meet and cope with all the trouble her brothers get into. The secondary characters, especially the shape-shifting Jack and the necromancing Georgie, are also delightfully real.

The villain of the story is really over the top, and that was one of the very few problems I had. I felt that the book lost some of its grounding in the real every time this villain or his minions made an appearance.

The romantic in me would also have liked for Rose and Declan to have more time alone together than they did, but I was pleasantly surprised at how satisfying their courtship was even with two children around most of the time.

I really enjoyed On the Edge, and I especially loved the way reality intermingled with fantasy in the world of the book. The characters might have magical powers needed to save their world, but they also shopped at Wal-Mart and had to stretch their pennies to pay for gas and groceries.

I would recommend this book to fans of Charlaine Harris and Patricia Briggs, and to anyone who enjoys a romantic fairy tale now and again. I had great fun reading it and I feel that its spot on my top ten list of 2009 favorites was well-deserved. My grade: B+/A-.

This book can be purchased at Amazon or in Mobi/eReader/epub format from Fictionwise or other etailers.

This book was provided to the reviewer by either the author or publisher. The reviewer did not pay for this book but received it free. The Amazon Affiliate link earns us a 6-7% affiliate fee if you purchase a book through the link (or anything for that matter). We do not earn an affiliate fee from Books on Board through the book link.

→ Janine
Previous article: REVIEW: Lead Me On by Victoria Dahl
Next Post: REVIEW: The Soldier of Raetia by Heather Domin