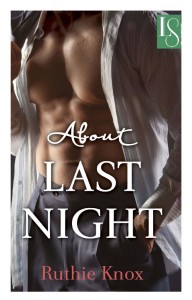 Cute is the best word I can use to describe this book, but not cute in a saccharine, juvenile way; but in a fun, make you smile sort of way.  Mary Catherine Talarico is an assistant curator at a London museum. She’s trying to reboot her life after a decade of bad decisions leaving her emotionally and physically wrecked. She’s abandoned her home for London and her two part name for a short, chic one — Cath.

Two years without a lover, however, places her in a precarious position when CITY, as she refers to the handsome well dressed banker type who rides the train with her, proves himself to be not only handsome but also kind. Her defenses are low after a bad date night and one too many drinks.

While this is told in the third person and we do get certain POV scenes from CITY, I felt like it could have worked equally well as a first person narrative. While both Cath and Nev (CITY) were in the process of remaking themselves, I felt like Cath powered the narrative.  Perhaps part of the problem with Nev’s storyline is that it is a common one. Scion of a wealthy family, he’s being forced into a rigid lifestyle that he is trying to reject.  Either fall in line and receive the promotion at his family’s bank or turn away and be outcast from the family.  Part of falling in line requires marriage for Nev.

Nev’s family is so stereotypically bad that it mars the overall feel of the story which is, for the most part, fresh and fun.  Nev is intensely attracted to Cath and pursues her despite the barriers she tries to erect.  Cath is attempting to stick to her reformation project, with mostly good results until Nev shows up.

“How can you be nice to me when I did that?” she blurted out. “Don’t you think less of me?”

“For being drunk in the first place, and then for sleeping with you.”

A smile lifted one corner of his mouth. “I slept with you, too, love. Do you think less of me?”

She sighed. It was no use trying to explain it. Why she’d done it, why she shouldn’t have. Why she couldn’t do it again. Her life, and her mother, and the New Cath Reform Project. This wasn’t about morality. It was about judgment. Specifically, it was about her lack of any. But how did you tell that to someone who seemed to have complete confidence in his own?

“I was beginning to fear you hadn’t noticed.”

That made her snort. “I noticed. I can’t stop noticing. That’s my whole problem.”

Cath keeps resisting; Nev keeps pursuing and the chase is a delightful bit of courtship.  The push/pull of the relationship works out well because of the self deprecating voice of Cath. She knows herself well, but lacks the backbone to really resist when she thinks something is bad for her. This is what makes Cath so attractive both to Nev and to the reader; not her weakness but her rueful acceptance of her own downfall.  For Cath, however, she believes her downfall is inevitable which is why she keeps giving in to Nev.

Nev lacked consistency for me.  He was so confident with Cath and in the face of near constant rejection (perhaps the pattern of behavior leads to success in the end feeds his persistence); yet with his family, particularly his mother, Nev is still trying to find a way to exert himself.  I felt like you wanted Nev to be both beta and alpha and as such never was a fully realized character.

Even with the problematic characters, I enjoyed both the heat level (high) that was mixed with the sweet and romantic story.  B