REVIEW: Bared to You by Sylvia Day 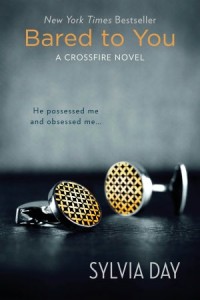 Bared to You is narrated in first person by Eva Tramell, a recent graduate who has just moved to New York to begin work as an assistant to an ad agency executive. Along for the ride with Eva is her best friend and roommate Cary, who is gorgeous, sweet, and bisexual.

Eva and Cary live in a Manhattan apartment courtesy of Eva’s wealthy stepfather. It becomes clear early in the book that Eva suffered a trauma as a child and her mother is overprotective as a result. Eva’s mother and stepdad (a high powered millionaire and corporate head honcho) do all they can to buffer Eva from any sign of harm, which leaves Eva feeling slightly suffocated.

The weekend before she is to start work, Eva goes to the Crossfire building, where she will be working, in order to familiarize herself with it. She loses her balance while helping another woman retrieve change she dropped, and a hot, charismatic man comes to her aid.

The man, Eva learns later, is Gideon Cross, the millionaire who owns not only the Crossfire building but other properties around the city as well. Gideon is as unwittingly hot for Eva as she is for him, and he pursues her relentlessly. But although part of Eva would love nothing more than to tumble between the sheets with Gideon and f–k his brains out, she is put off by the businesslike way Gideon tries to bring this outcome about.

Gideon informs Eva flat out that he keeps his friendships separate from his sex life. While Eva is not seeking marriage and has no problem with a more casual friends-with-benefits arrangement, she does not want Gideon to take possession of her in the same cold manner that he would a corporate acquisition.

Ava and Gideon therefore have to negotiate their relationship, which is complicated by their childhood baggage. Both are scarred by a painful past, but whereas that experience has made Eva vulnerable and in need of affection, Gideon’s trauma has made him in need of cool control.

Many of the reviews of Bared to You have discussed the book in comparison to Fifty Shades of Grey. Certainly the Berkley cover of Bared to You invites such comparisons, but since I have not read Fifty, I don’t know what the similarities and differences between the two books are and can only discuss Bared to You on the basis of its own merits.

There were things I liked about Bared to You, and they were almost, but not quite, enough to keep me reading past the (according to my kindle) 56% mark. One of them was the Manhattan setting. New York is quite possibly my favorite city in the United States and I am not sure why so few romances make use of it as a backdrop. The world of New York executives and socialites comes alive in Bared to You and makes the story more engaging.

But even more than I liked the setting, I liked Eva, who was smart, sweet, and above all, honest with herself. Although it irritated me that, in typical romance heroine fashion, she was completely unaware of her beauty, I couldn’t hold it against her because she was so easy to relate to.

Eva knows she likes sex and that Gideon attracts her, but she’s also conscious of her emotional issues. As someone said in the DBSA podcast interview, she is self-aware. Not only that, her characterization strikes a delicate balance between that self-awareness and her human foibles and errors. I loved that she understood herself so well and viewed the therapy that had gotten her to where she was as part of a healthy healing process.

So, if I liked Eva so much, why did I put the book down unfinished? The answer lies in her counterpart, Gideon. Gideon was a stretch in multiple ways. First, we are asked to believe that at only twenty-eight years of age, he has acquired wealth and CEO status. As cbackson commented during the discussion that followed Jane’s review, that is a lot to swallow.

Not only that, but it seems every time Eva steps into a building, it turns out Gideon owns it. Her workplace, the Crossfire building, is owned by Gideon. Eva and Cary go clubbing, and learn that Gideon not only owns the club they end up in, but also the building in which their apartment is located. Gideon takes Eva to work out at his gym, CrossTrainer – of course, it too is owned by Gideon’s company, Cross Industries. A hot, sweaty, and horny Gideon and Eva leave the gym and find a room at the hotel next door – turns out the hotel, too, is owned by Gideon.

After a while my credulity was stretched too thin, not just because of Gideon’s youth and wealth, but also because of the way Gideon’s charisma and looks were referenced over and over again. Every woman and more than one man takes note of Gideon’s hotness. Eva marvels at his magnetism almost every time we see Gideon through her eyes, which is pretty often.

Because the book was narrated in first person, after a while I wanted to tell her, “I get it Eva, he’s hot, and you’re hot for him. There’s no need to keep saying it at every turn.”

Gideon is also amazing in bed, both in his unusual stamina and in his ability to give Eva multiple orgasms. I consider myself an adventurous reader, and have enjoyed kinkier books than the first 56% of Bared to You, so I don’t think I’m being prudish when I say that after a while I tired of reading about Eva’s orgasms, Gideon’s orgasms, and the mindblowing nature of their rolls in the hay.

Their minds might have been blown, but mine was not. The sex felt repetitive to me. I had to backtrack and reread some of the sex scenes after I realized I had skimmed them from boredom the first time.

Despite all my disbelief where Gideon is concerned, I think I could have gone along with and enjoyed the fantasy his character presented had Gideon possessed an iota of charm. Instead, his controlling tendencies (investigating Eva, insisting she call him or talk to him, leaving multiple messages on her phone) repelled me, and I was equally put off by the way he blew hot and cold with Eva.

One minute Gideon would call Eva “angel”, the next he’d be cold or insensitive. I came to the conclusion that Gideon was a head case and one I would feel sorry for were it not for all the wealth, supposed charisma, and beautiful women he had treated like business deals in the past. As it was, I just wanted to say, “You can do better Eva. Take a closer look at your roommate, Cary.”

It didn’t help Gideon’s lack of appeal that the sweet, supportive, yet messed up Cary interested me more. I would have been on board with this book had Eva dropped Gideon and ordered a candlelight dinner for the roommate she had heretofore taken for granted. All the makings for a great friends-to-lovers romance were there.

(At one point in the book, an insecure Eva wonders why Gideon wants her and thinks it’s mostly for sex. Cary reassures Eva that Gideon wants her for her intelligent mind and caring heart. One of the problems with this statement is that it’s something I’m told [through Cary] but what I’ve been shown contradicts it. Gideon put the moves on Eva immediately after the first time he saw her, before he’d had a glimpse of her mind or her heart. It is Cary who knows how sweet and smart she is.)

So in the end, I still really, really like Eva. She’s the kind of person who deserves nothing but good things, but she gets Gideon instead. Part of me would like to keep reading, because I’m curious about how the revelations about Eva’s trauma are going to play out. But I’m afraid that if I keep going, I’ll have to read through more descriptions of Gideon’s gorgeous looks, Gideon’s charisma, Gideon’s control freak tendencies, Gideon’s neediness, Gideon’s buildings, Gideon’s orgasms – you get the idea.

I could not be less interested in Gideon, and so, as much as I like Eva, I doubt I’ll be reading further, at least not without skimming. DNF.