It’s hard to believe that it’s been more than fifteen years since your popular medieval romance Betrothed was released. That book featured a secondary character, the brother of the heroine, who caught the attention of many readers. Dante Chiavari was a dangerous and deadly assassin who had been living by his wits ever since his parents were betrayed and murdered in Venice. A planned sequel to Betrothed, featuring Dante as the hero and titled Assassin was announced. Readers waited…and waited…and waited some more for Assassin to come out. I had long given up on expecting another Elizabeth Elliott book when I happened to be perusing NetGalley and came across this book, the long-awaited sequel, now renamed The Dark Knight (which just makes me think of the Batman movie franchise, but whatever). 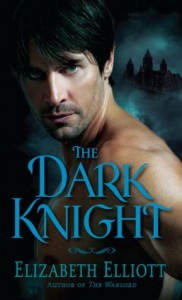 The year is 1293, and Dante Chiavari is an assassin for King Edward of England. He’s given an assignment to maybe kill or maybe not kill (it’s kind of complicated and I really didn’t understand it when I first read it; I felt like the beginning of the book was weirdly organized and thus a bit confusing) a young Welsh noblewoman named Avalene de Forshay. (This struck me as an odd name for a Welsh woman, being both too French-sounding and vowel-laden to be Welsh.) The assignment is given to Dante by his mentor (or spy boss? I don’t know; it wasn’t clear) Mordecai. Mordecai’s instructions to Dante are somewhat opaque, and involve his reading of Tarot cards, which had me rolling my eyes more than a bit. Mordecai’s reading of the cards indicates that Dante must prevent a marriage between Avalene and a Welsh baron named Falke Segrave; preventing this marriage happens to be King Edward’s will as well, but the cards tell Mordecai that allowing it to go forward will result in Dante’s death, so that’s an added motivation. The cards, which are strangely specific on certain points, get hazier after that and Dante is essentially told: kidnap Avalene, and the rest is up to you.

As I mentioned above, the beginning of the book was strangely organized, with what felt like too much information dumped on the reader via Mordecai in the first pages, and then an interlude where Dante goes to Venice to finally avenge his dead parents. Since Dante’s revenge on these enemies seemed to be his raison d’etre, it felt odd to have that scene almost shoehorned in; at the very least I think it would’ve made more sense to open the book with it, and then go onto the scene in London with Mordecai. As it was, something that should have been very important to Dante felt like an afterthought.

Avalene lives with her aunt and uncle at their castle Coleway, where she is supposed to be learning how to run a large estate but where she mostly seems to act as an unpaid (and unappreciated) servant. She is constantly undermined by the oily steward John, who is a cousin of her uncle Lord Brunor. Avalene has been largely ignored by her father since her mother died and he remarried and started a new family with his second wife, but her marriage will be advantageous to him and his (possibly treasonous) political plans, so she is willing to do her duty, as well as eager to escape her dreary life at Coleway. When a mysterious knight, Sir Percival, shows up in the middle of a feast and declares that he has come to bring Avalene home in preparation for her marriage, she is happy to go. Less happy are her aunt, Lady Margaret, and the steward John, who covets Avalene and wants to marry her, in spite of the fact that she is far too well-born for him.

Anyway, sinister plots form and are conveniently overheard, and Avalene and Percival (who is really Dante, in case you hadn’t figured that out) are forced to flee Coleway. Of course, since Percival is really Dante and has no intention of taking Avalene to her father, this dovetails with his plans nicely.

Avalene is, not to put too fine a point on it, a ninny. She is somewhat inconsistently characterized, actually, in that she’s portrayed as being competent in running a castle, contrary to her aunt’s claims, but in every other way she shows herself to be oblivious and dull-witted. I think the obliviousness is supposed to come off as innocence, but really she just seems dumb. It doesn’t occur to her until Dante mentions it that their flight from the castle and long road trip, sans appropriate chaperone, will be disastrous to her reputation. (Incidentally, this seemed more like a notion from other eras; in the age of courtly love would a noblewoman traveling alone with a knight be assumed to be ruined? I don’t know.) Avalene’s perception of the people around her is often quite off (she doesn’t seem to realize that it’s not her personality that drives men away from her; it’s strongly implied that John-the-evil-steward scares them off). She’s childlike at times, peppering Dante with questions of the “Are we there yet? How about now? How about now?” variety. Dante observes her as being “kittenish” at one point. I like kittens more than the next person, but I was not charmed by the comparison.

Avalene’s lack of sophistication stands in stark contrast to Dante’s dark alpha uber-competence. Though Dante is also kind of boring – he is a collection of traits that never really came alive for me. He’s also, like many a dark, dangerous hero, much less menacing than he’s advertised to be. Only in the revenge scene in Venice does he come off as truly ruthless. There are several situations in which one would think he would practice his profession, in order to prevent pursuit and/or protect himself and Avalene from enemies, but there is always some reason that Dante chooses not to pull the trigger, as it were. I feel the same way about dangerous assassin heroes as I do about sexually experienced heroines: I don’t require them in my reading but if a hero is presented that way, I expect him to live up to his reputation, at least a little. Dante ultimately seemed sort of toothless.

The bulk of The Dark Knight is a road romance. Dante and Avalene, accompanied by two associates of his and a little boy he rescued in Venice, journey towards London, growing closer even while the secret of Dante’s identity and true motives stands between them.

I wonder if I would’ve felt differently about the contrast between Dante and Avalene if I’d read this book in 1997 instead of 2012. I do think I had a greater tolerance for “old-style” romance at one point, even if they weren’t always my favorite. My expectations for The Dark Knight were probably unavoidably high, given that I’d quite liked Betrothed, even if at this point I don’t really remember why (I remember almost nothing about it). I do think that The Dark Knight reads rather like a book from the late 90s (at least the alpha-hero-innocent-heroine dynamic does), and I think I would’ve been easier on it had I read it then. Read now, at a time when I’m a pickier and more critical romance reader, lacking much to recommend it in the way of plot, prose or characterization, and with a dynamic between the h/h that simply bugs me, my grade for this book is a C-.