KaetrinB Reviews / Book ReviewsContemporary / muscian / Rock-Star / second chance / Small-TownComments Off on REVIEW: No Place Like You by Emma Douglas 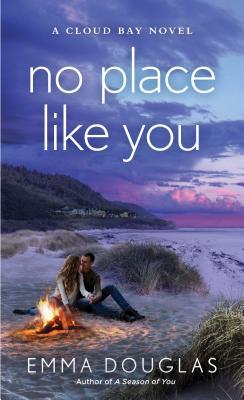 I enjoyed the first novel in your Cloud Bay series (the second one is still on the TBR) and was happy to read Zach’s story in this third book. I thought it was going to be a trilogy but it seems there will be at least one more book but I will zip my lips and say no more about why. But, depending on who the couple is in the next book I may well be wanting at least two more. Just saying.

Zach Harper burned a lot of bridges already in this series. In Need You Now, he bailed at the last minute on the “secret slot” in the Cloudfest lineup. The annual music festival on Lansing Island takes up a lot of Faith’s time and when Zach pulled out of the previous year’s festival with barely any warning, he made a lot more work for Faith and wounded her personally as well. When Fringe Dweller (the band that Zach threw Cloudfest over for) takes an unexpected and indefinite hiatus, Zach heads back home to Cloud Bay knowing he has some grovelling to do.

Leah Santelli is Faith’s close friend and also works at Harper Studios as a sound engineer, following in the footsteps of her dad who worked with Zach’s dad, rock icon Grey Harper. Leah and the Harper siblings all grew up together and Leah had a crush on Zach as a teen. Zach is three years her senior and didn’t think she stood a chance with him for a long term relationship but she did proposition him 10 years earlier, on her 18th birthday, and they had a night of amazing, sweaty, combustible sex. Then Zach left Lansing Island and has barely been back since.

When Zach returns to Cloud Bay, he has plans to record a solo album and work with some legendary producers  to try and launch a solo career. He volunteers for the secret slot in Cloudfest, where he plans to play a six-song set to whet appetites for the upcoming album.  For Leah, this represents two amazing opportunities; she wants to produce and if she can convince Zach to give her a shot, it could make her career. And personally, if their chemistry holds true, perhaps she can get some more Zach-time before he leaves again. Zach always leaves. She knows that. She knows there’s no future for them. (Famous last words Leah! Really, Leah needs to read some romance novels because if she did, she’d know that shagging like minks to get a man out of one’s system never works. Poor deluded Leah.)

I enjoyed the history that Leah and Zach have even though most of it was a decade ago. There’s a strong sense of connection between them. It’s not just physical attraction. Leah knew Grey and knows Zach’s family. She knows Zach, in a way that most people never could. Zach, for his part, is a little more cavalier but he does remember many things about Leah and her likes and dislikes. So it was always clear to me that she left an indelible impression him. He also remembers how awesome they were in the sack together and he begins to wonder whether leaving all those years ago (or, leaving and not taking her with him) was a mistake. And of course, while Leah is not a musician herself, she understands music and the drive Zach has to succeed in the business as an artist in his own right – and not merely on the coattails of his famous father. It’s something she has in common with Zach in fact.

As Leah and Zach work together, finding a sympatico professionally which only augments their mutual attraction, Leah, despite her best intentions, falls for Zach again. She knows she has a broken heart in her future. But she’s going to enjoy him while she can. Zach’s self-awareness is a little less obvious. I admit I had hoped that he would realise what was in front of his face before being a complete jerk but alas, he did not. I wasn’t all that sure he had grovelled enough to deserve Leah at the end, to be honest. I did believe he loved Leah and the plans they made together for their future seemed solid and authentic and well able to succeed but it still stung a little that he did what he did. I guess I needed a little more from him and/or perhaps a little more time with the happy to forgive him for being a dick.

That said, Leah forgave Zach and I suppose that’s the main thing. I did believe in their HEA. I think their shared history, their mutual passion for music and their own individual talents – which complement one another and do not compete with one another will hold them in good stead and they definitely have the physical chemistry and a solid friendship too. I did believe Zach wouldn’t screw up again. But Zach is obviously the guy who has to actually burn himself to learn rather than just hold his hand over a hot flame to get the gist. (I’m being a little mysterious because I don’t want to give too much away but just in case anyone is worried, there’s no cheating or anything like that.)

I also believed the HEA because Leah’s career gets fair attention too. She has a different trajectory but it is no less important and it is not regarded by either of them as being subservient to Zach’s career.  Still, I am glad that there’s (apparently) at least one more book in the series because I’d like to see Zach and Leah embed their HEA a little.

Zach and Leah are good together – apart from Zach’s footloose wanderlust there is little keeping them apart. No Place Like You is a low-angst, sweetly charming romance where a not-very bad boy rocker learns the true value of home – both the place and the people.