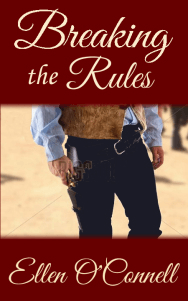 On a cold winter night, Garn Coburn watches from shadows as two lawmen rough up a woman and leave her lying in the dirt looking like a pile of rags in the moonlight. Garn lives by his gun and by a set of rules he hopes will keep him alive. Checking to see if the woman is badly hurt breaks the first rule. Never mind anyone’s business but your own. Helping Edie Thorne shatters most of the rest.

The bank served Edie notice of foreclosure on her ranch soon after her husband’s death, but she expected a final notice telling her when to vacate, not two lawmen bursting through her front door, dragging her from the house, and beating her for resisting.

Surprised by the gunman leaning over her in the night, weakened by injuries and desperation, Edie struggles to her feet and lets Garn lure her into going to town with him. So begins a partnership between a man breaking the rules he lives by and a woman determined to get back a decent life any way she can….

NOTE – right now, this is only available by signing up for Ellen O’Connell’s mailing list. But it is free.

Garn Coburn knows he’s breaking several of his “Rules to Live By” – which could also be called “rules that just might keep you alive” – when he investigates the heap of cloth covering a person – still spitting in defiance at the tormentors – the sheriff is beating. Once he realizes the person is a woman, Coburn breaks another rule. After that, the number just keeps growing. But then he’s never heard a woman, much less a respectable woman cuss like a muleskinner the way this one does.

Edie Thorn is pretty sure the man who won’t leave her to die in the cold is a gunman so the fact that he won’t kill her as an act of charity but would let her pay for the privilege irks her. But Coburn says if you want something done right, you have to pay what the job’s worth. He will badger her into getting up and going to get something to eat with him even though Edie’s fairly sure the owner of the café would put rat poison in her food. Coburn’s got an answer for that and the lawmen who were beating her who show up there too.

In fact Coburn seems ready and willing to harangue and order her and anyone else about if it gets things he wants done, done. Given his steely eyed glare, cold manner and steady hand with a gun there are few who are going to argue – much – with him.

He does get Edie to think about tomorrow and her options where the night before she thought she had none. Is there a way Edie can get this man to stay and increase her odds for the future? She might just have the answer.

Since this is a shorter story than the two full length books I’ve already read, I wasn’t surprised that a lot of the action is Coburn using his head and getting people to cooperate with him instead of needing to use a gun. Even Edie is impressed by what Coburn manages to arrange once he knows what pressure spots to push on whom. His reputation doesn’t hurt either.

Since these two spend basically most of a month together day in and out, I felt sure they knew their feelings even if they were both afraid – for different reasons – to say them out loud. You obviously know your ranch stuff and I never stopped and thought “now wait a minute, even I know that’s wrong.”

Garn – yeah, I can see why he goes by this instead of his full name – is a man with sisters, lots of them, and he knows when to speak and at least some of the time when it’s better to hold his peace. He immediately admires Edie’s strength and spirit – even if it comes with stubbornness – while it takes her a little while to push past her initial impression of him –

– and discover the man he is. Well, it’s not that he hides behind a wall to conceal an inner softness, he can be a shit, but he does take care of animals and is tough when he needs to be.

I had a blast with Edie and Garn and I love that he lets – no, make that demands – that Edie be as tough as she can and independent as she wants to be. A-