REVIEW: Now That You Mention It by Kristan Higgins 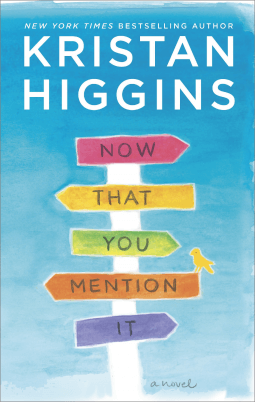 One step forward. Two steps back. The Tufts scholarship that put Nora Stuart on the path to becoming a Boston medical specialist was a step forward. Being hit by a car and then overhearing her boyfriend hit on another doctor when she thought she was dying? Two major steps back.

Injured in more ways than one, Nora feels her carefully built life cracking at the edges. There’s only one place to land: home. But the tiny Maine community she left fifteen years ago doesn’t necessarily want her. At every turn, someone holds the prodigal daughter of Scupper Island responsible for small-town drama and big-time disappointments.

With a tough islander mother who’s always been distant, a wild-child sister in jail and a withdrawn teenage niece as eager to ditch the island as Nora once was, Nora has her work cut out for her if she’s going to take what might be her last chance to mend the family. Balancing loss and opportunity, dark events from her past with hope for the future, Nora will discover that tackling old pain makes room for promise…and the chance to begin again.

I haven’t read one of your books for a while because even though your writing is excellent and makes me smile, you sure put your heroines through a lot. I mean a lot. There is a whole heaping bunch of “lot” in this story but by the same token, Nora can and does kick some ass too.

I’m glad the story started off with Nora being capable and competent and saying and doing some things to a certain person who needed that done. Plus she’s a gastroenterologist. Yeah, so why do I love that too? Because as Nora says, her specialty might never be featured on ER as saving a life but in almost the first scene in the book, she makes a great save and outdoes the “cool kids” of the ER staff. Which also harks back to her childhood in a way but more on that later. Then in her “I thought I died” moment, she remembers to think about her dog Boomer, the “Dog of Dogs.” I love Boomer. If I didn’t have a houseful of cats, I’d want my own Boomer. Thank God Nora takes this moment of epiphany and is honest about her feelings for Bobby – no fooling herself, no “maybe he didn’t mean it when he flirted with that woman over my corpse.” No, Nora kicks that relationship can to the curb. Go Nora!

Then comes the background which tells us about Nora and what when into making her who she is. Recently a friend of mine was talking about a discussion she once had with a well- known author of historical romance books and why authors have to put heroines through so much. Basically the author told her “that it is pretty essential for any romance plot. Who would be interested in a pretty girl in comfortable circumstances who meets a nice young man at a dance and marries him to the delight of her parents and his after a lovely courtship?” Okay I get it. I see the author’s point but yowza, you put Nora through the physical and emotional meat grinder. Yes, she comes out as tempered steel but she could as easily have gone Postal on half of her childhood and probably not been convicted – she went through that much. But again, she made a plan, she executed the plan and she survived and forged ahead in life.

So eventually Nora ends up back home, back in the place she (obvs) didn’t want to return to for reasons we’ve had laid out for us. I’ve never been to Maine but reading this book makes me feel as if I have. The salt, the sea, the lobster rolls, the dropped “r”s – but thanks for not putting too much of that in, there’s just enough for color but not annoyance. It’s clear that Nora still has issues with the place – or is it the people? Because pretty soon she’s facing friends and (past) foes – the people who love her and the people who made her teenage years hell. She responds with grace and the best revenge – proof that she’s lived her life well and made something of herself when the main rival she faced has become a pathetic asshole.

Her years away have served her well and she might not be able to crank out the survival skills her Muggle mom can do – and frankly I wouldn’t want to tangle with Nora’s mom – but Nora has gained confidence in herself and her abilities. She’s not the miserable, lonely, and sad person she was hiding herself away behind homework and food. But the demons she needs to face are not just people but events and losses. Since the book is told from Nora’s POV, there are childhood mysteries we know as little about as does Nora. There are people I wanted to smack and yell “tell her!” what she needs to know. There are some I wanted to kick – hard. But Nora and some of these people do finally communicate, do finally come to terms or understandings or peace. Apologies are made and meant. Nora is honest enough to admit that, maybe, she wasn’t the only one who was misunderstood or who had long held misconceptions. Or who didn’t have all the facts but then some of that wasn’t Nora’s fault.

Still, some memories are hard to shake and Nora has come back to the scenes of her childhood that she ran from and some people who just won’t forget. But she keeps her cool and I was cheering her on when she coolly takes it all on and tells it to fuck off. Boomer and I are proud of her. She’s also got some memories from Boston that haunt her. So this is where I issue the WARNINGS – serious warnings – for this book. If violence, especially sexual violence, triggers you – do NOT read the second half of chapter TEN. Nora survives but there is a scene which is described well enough to have had me holding my breath and my heart pounding.

Nora is lucky in some of the friends she’s made – and makes – over the course of the book. Her friend Roseline is awesome and her rediscovered friend Xiaowen is, as she herself says “the shit” who is saving the world through shellfish. They are the type of friends to drink wine and laugh with you and send you naughty cards. She also finds a relationship with someone that surprises her but as I reread parts of the book, it’s plain he was a good guy all along. He and she just needed some time to discover who they each were and who they wanted to be with. “He grinned, and his face went from ordinary to wicked in a flash. (He) was … yeah. He was. My knees tingled with all that he was.” He’s also the best dad and, as Nora knows, the best thing in a girl’s life is a father she can count on.

There is lots of humor here despite Nora’s gloomy teenage years. Two dinner parties had me in stitches. The second one I shouldn’t have been laughing so much because I’m an animal lover even if birds really aren’t my thing. Then comes the revelation and information Nora’s been desperately searching for for years. The reasoning behind her not being told does make sense based on the personalities involved. Things become clearer to Nora and she finally understands her childhood loss. The pain isn’t gone but she can finally mourn and come to terms with it. Nora isn’t the only one suffering and her niece is faced with painful loses and truths to bear as well. In this isolated Maine island, they find the strength to deal with this.

Okay so some of the threads are a little neatly wrapped and tied off but the story ends with an upbeat attitude. Nora knows she’s in the right place and among people who know her and accept her. She accepts herself too. She can finally exhale and stop trying to be perfect all the time. She has love, she has friends, she has faced down the demons from her past and life is actually pretty darn good. I put myself through the wringer again with her childhood but Nora stands up and takes no prisoners a lot faster than I was expecting. She does what her father wanted – is not afraid, has adventures and lives life to the fullest. B

Funny, how easy that could be. When you found the right person, there was no hiding of flaws…there was just trying to do better. There was the comfort of admitting your weaknesses and trying to get past them. The knowledge that no one needed you to be on all the time, always fun, upbeat, attentive…he only needed you to be yourself. The security in knowing someone loved simply being with you.