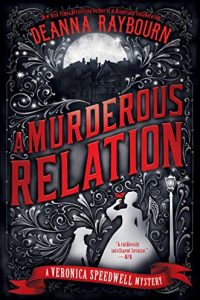 This is the fifth book in the Veronica Speedwell mystery series; I’ve read and reviewed the first four books. Big spoilers for the series appear below, so be forewarned.

Veronica and her partner in crime (-solving) and love interest Stoker are recovering, physically and emotionally, from the events of book four when this story opens. Stoker still has stitches from a stab wound to his arm, and both of them are grappling with the fact that they essentially admitted their love for each other in that book. But the two are quickly plunged into a new mystery involving Lady Wellie, the great aunt of their benefactor Lord Rosemorran. Lady Wellie has strong ties to the British royal family and has acted as a sort of eminence grise for them for decades.

Lady Wellie summons Stoker and Veronica to discuss the Jack the Ripper case, which has gripped London and caused unrest. She is concerned that this unrest could be a threat to the royal family, in the form of rising republicanism. She raises concerns about any potential future scandals damaging the family, as a prelude to introducing another person concealed in a hidden compartment in the room – Alexandra, Princess of Wales, the future queen of England.

Veronica has a secret about her parentage (though it’s a secret a lot of people seem to know about throughout these books), one that has put her in danger throughout this series. She is the daughter of an Irish actress and Albert Edward, first son of Queen Victoria and heir to the British throne (he later ruled as Edward VII). Her parents were secretly married, but her father eventually abandoned her mother (who subsequently committed suicide) for Princess Alexandra of Denmark. Since he never divorced Veronica’s mother before marrying the princess, his children with her are illegitimate. Meaning Veronica has a claim on the throne, albeit one she wants nothing to do with.

(I’m slightly confused about this plot point, actually, because Veronica’s mother was Catholic and I think that somehow affects Veronica’s  legitimacy? But anyway, those who would put Veronica on the throne are not entirely concerned about whether she’s strictly next in the line of succession – they imagine her more as a figurehead put up as the result of a coup.)

Princess Alexandra wants Veronica and Stoker’s help. She is concerned about her oldest son, Prince Albert Victor, commonly known as Eddy. He was enamored, supposedly, of a woman who it turns out is a notorious madam, and has given her a significant piece of jewelry that can be traced back to him. Now Eddy has fallen for Princess Alix of Hesse, who his mother thinks would be a good match for him. She’s worried that a scandal will bubble up regarding the jewelry and the madam, ruining the prospective marriage and damaging the royal family even further in the public’s eyes.

Veronica, angry and resentful at her position as the dirty little secret of the family, refuses to retrieve (steal) the jewel back. The princess (and her escort, Inspector Archibond, a member of the police who apparently appeared in a previous book, though I don’t remember him), leave. Lady Wellie, upset, implores Veronica to relent, but she refuses. Lady Wellie then falls into a faint and appears to have had a stroke.

Veronica and Stoker, of course, do end up trying to get the jewel back, after learning that Lady Wellie fears that Eddy may himself be Jack the Ripper. They hare off to the brothel owned by the madam in question, a Frenchwoman (of course) named Madame Aurore.

A Murderous Relation had slightly odd pacing, perhaps because chunks of it felt like a series of set pieces that sometimes went on too long. First we have the set-up as described above, and then the preparations for dressing in masquerade to visit the brothel and the brothel visit itself. The third act, so to speak, has

Veronica, Stoker and Eddy himself imprisoned by two madmen with similar aims but different motivations. That part featured some poignant interactions between Veronica and Eddy and Veronica and Stoker, but it also felt a bit claustrophobic and drawn out.

(For what it’s worth, I counted, and the brothel sequence takes up 20% of the book while the next part is about 22%. So they do comprise a significant chunk of the book.)

This is a fairly solid entry in the series with some good points (finally, Veronica and Stoker progress!) and interesting weaving of real historical details. Not just Jack the Ripper and Eddy (historians firmly aver that the latter had nothing to do with the Ripper), but also the (poignant to me) mention of Eddy’s courting of Alix of Hesse. In truth, she spurned his suit because she was already in love with Nicholas II of Russia. Alix became Alexandra Feodorovna, empress of Russia, and was killed with the rest of her family in Ekaterinburg in 1918. Eddy himself never lived to be king.

My grade for A Murderous Relation is a solid B.