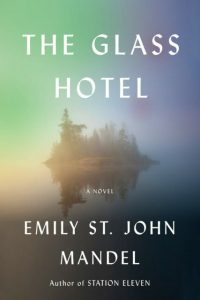 Jennie:  Five years ago, I read and loved Mandel’s breakout novel, Station Eleven. It would probably have not come to my attention if not for Janine’s terrific review. I loved Station Eleven so much that I was inspired to read the author’s first novel, Last Night in Montreal, which wasn’t as successful for me. Still, I was excited to hear about the impending release of The Glass Hotel, and when Janine suggested we review it together, I was more than happy to do so.

The novel opens with a chapter titled “Vincent in the Ocean, December 2018”, and contains the fragmented thoughts of Vincent (who is female), just after she has fallen or jumped off a ship.

The second chapter begins 20 years earlier, in Toronto, with a character named Paul. He’s 23, a (barely) recovering drug addict, a music composer, and Vincent’s half-brother. He’s currently flunking out of his first semester in college, and when he attempts to make connections, particularly with a beautiful singer he’s met, tragedy strikes. Paul impulsively gives the singer, Annika, and her bandmate, Charlie, some pills he recently bought off a dealer. He doesn’t realize the pills are bad until Charlie drops dead shortly after.

Paul flees Toronto and seeks out 17-year-old Vincent, living in Vancouver with her childhood friend Melissa. The action then shifts back four years: Paul is 18, Vincent is 13, and he has come home to the small island, Caiette, where they were raised (well, Paul was raised there until his parents divorced). Vincent’s mother has gone missing after taking a boat out for a sail. She’s presumed to be dead, but whether it was an accident or suicide is not clear.

When next we encounter Paul and Vincent, both are working at the titular glass hotel on Caiette, a getaway for the very rich. Paul’s tenure is short-lived; a nasty message is scrawled on the lobby glass using an acid marker, echoing a similar act of vandalism Vincent committed at school shortly after her mother disappeared. But it’s Paul who gets blamed this time, and sent packing, while Vincent quickly forms a connection with Jonathan Alkaitis, a wealthy financier and owner of the hotel. Alkaitis is a widower well over twice Vincent’s age, but she is soon installed in his Greenwich, Connecticut home, and referred to as his wife, though they never actually marry.

It wasn’t until Alkaitis appeared (15% in, but it felt like a lot had happened already) that I remembered that The Glass Hotel was supposed to be about a Bernie Madoff-style Ponzi scheme, and the people who are ruined by it. That story does eventually take center stage, and while it was compelling I’m undecided on how well I feel that it gelled with the story of Vincent and Paul and Caiette.

Ghosts are an overarching theme in The Glass Hotel – many times, their appearances can be seen as manifestations of guilt or grief. Paul sees Charlie and others also see deceased people they knew. An extension of the ghost theme are the “ghost lives” in which several of the characters indulge in the aftermath of the Ponzi scheme’s crash—realities and possibilities that don’t exist in their world.

Janine: Shipping executives Leon Prevant and Miranda are the Station Eleven characters. When Leon first appeared I wondered how the author could possibly connect the two books. Later, Vincent thinks about how the quickly halted “Georgia Flu” could have destroyed civilization but didn’t—so Station Eleven’s events don’t happen in this book’s reality.

I had mixed feelings about this, truth to tell. At first it felt like the author was nullifying Station Eleven, in a gimmicky way. Eventually, as the alternate reality developed, I decided it worked after all.

Jennie: I could see feeling that it nullified the world of Station Eleven. But I did think it was in keeping with the alternate realities idea. In general in Mandel’s books, characters encounter each other in unexpected places and ways (there is even an exchange about “the smallness of the world”, which seemed almost a meta-commentary).

Absorbed as we all are with COVID-19, I think Station Eleven is probably resonating with a lot of us today. Perhaps for that reason I again reflected (as I did after reading Last Night in Montreal) on how well the author’s style is suited to a post-apocalyptic landscape, and how it doesn’t work quite as well when set in the “real” world.

Janine: Yes. Right you are.

Jennie: That’s not to say that I didn’t like The Glass Hotel – the writing is lovely, and the characterization is very finely done. I viewed Vincent as the main character, but that may have more to do with me as a reader than with the book itself.

Janine: IMO Vincent really is the main character. I had mixed feelings about her choice to lead her luxury-filled life with Alkaitis. She was ignorant of the Ponzi scheme but benefited from it anyway. And she essentially erased herself—who she really was—to serve in her role (almost a job) of Alkaitis’s “wife.” Her self-awareness helped me like her.

Jennie: I liked Vincent too. I’m not entirely sure why, because she remained somewhat opaque. In that she reminded me of one of the main characters of Last Night in Montreal, as well. I never really understood why she went away with Alkaitis. I didn’t get the sense that she had minded that much, for instance, earlier in the book, when she was very poor. But maybe I missed some clues.

Janine: I thought it fit her character that she wanted to escape her current reality in favor of a new and more appealing one.

Although it’s also Vincent who thinks at one point, “there’s an inherent pleasure in being unseen”, which may be a bigger key to her personality than I’m giving it credit for.

In addition to getting Vincent’s, Paul’s and Alkaitis’ perspectives, we follow the artist Olivia, who has a tenuous connection to Alkaitis (she knew his long-dead brother years before) and the aforementioned Leon Prevant, whom Alkaitis encounters at the hotel on the same trip where he meets Vincent.

Janine: Walter, a manager at the Hotel Caiette, and Oskar, one of Alkaitis’s subordinates in the Ponzi scheme are also POV characters.

Jennie: There are so many rich themes woven throughout the narrative; besides ghosts, the story touches on notions of guilt and culpability, self-deception, and what Vincent refers to as “the kingdom of money” – the world she travels through when she’s with Alkaitis.

Janine: Yes. Class differences is another theme, as is living on the fringes vs. participating in society. There’s a theme The Glass Hotel shares with Station Eleven, too—the before and after of a grim disaster and the ways people cope, or don’t cope, with all they have lost.

Janine: To a certain extent the novel was overreaching. I liked its disparate parts but I agree that it didn’t completely gel. The stuff about the inner workings of the Ponzi scheme and the damage it did could have made for a great book, and so could have the story of Vincent and other kept women. But marrying these elements, though unconventional, made the novel feel a little… spread thin, maybe?

Jennie: I think you may be right. I read in an interview with Mandel that she had an interest in Bernie Madoff (although she made a point to state that Jonathan Alkaitis is not supposed to be Bernie Madoff). Maybe it was a case of trying to fit together pieces that didn’t quite fit. I did like the echoing of themes, but the overall effect wasn’t entirely cohesive.

Though for me it comes down to this story being too sad to wholeheartedly love. It’s not depressing, exactly, but there’s a layer of grief, sadness and loss that permeates the story. I can handle sad better than depressing, but I prefer that sadness leavened with something, a little hope or even a happy ending for one character.

Though I forgot; I guess maybe Walter got a happy ending of sorts?

Janine: He did, but even his happy ending was wistful.

Janine: I agree it was sad without being depressing. There was a rare spot of humor but overall it was melancholy and in no way as uplifting as Station Eleven was, for all that book’s haunting, elegiac quality. This one had a narrower emotional range, and that made it feel almost monotone. It was glum.

In a strange way, this book also felt too familiar. The disaster-and-its-ramifications theme, the prismatic use of multiple POVs, the back-and-forth in time, the characters being haunted by losses, all made it seem like too close of a cousin to Station Eleven despite the huge difference in subject matter. It probably didn’t help that I’ve read Station Eleven twice.

Jennie: Not to be all “this reminds me of Last Night in Montreal” yet again, but…she definitely has a style. Which, knowing and to a degree expecting that, I think, allowed me to be less bothered by it.

As it is, I admired The Glass Hotel more than I loved it. My grade is a B/B+.

Janine: I agree that it was well-written, but I felt like something was missing from it. It’s a B- for me.