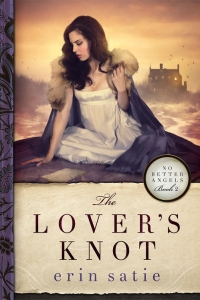 The Lover’s Knot by Erin Satie

This was reviewed by Jane back in 2014. I agree with her point about the nature of the heroine’s memory issue being fuzzy – it actually took me a while to understand that Sophie even had an issue with her memory.

For some reason this book didn’t really click for me. The characterization felt all over the place at times, and I didn’t really feel emotionally involved with the hero or heroine. It reminded me a bit of Satie’s The Secret Heart in that the heroine’s passion for brewing ink didn’t feel organic; there was something self-conscious about it. (In The Secret Heart the heroine furtively practices ballet while the aristocratic hero likes to box, and both interests as well as the fact that each of them had these secret passions that were wildly at odds with their social stations felt forced to me.)

The writing in The Lovers Knot is good and the resolution to the mystery of the suicide of the previous duke was well-done. Still, this was not my favorite book in the No Better Angels series. My grade is a B-. 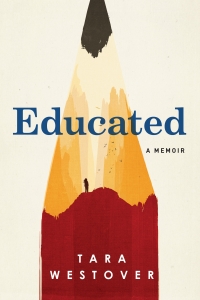 This book has received a lot of buzz and has been on the non-fiction best sellers list for a while. It happens to fulfill my interest in people who grew up in really weird families. In this case, the author was one of seven children raised by Mormon survivalists in Idaho. Her parents (really her father mostly, since he ruled the family with an iron fist) didn’t believe in organized schooling or traditional medicine and were very wary of the government. They didn’t send their kids to school, and their record at homeschooling was pretty spotty.

Despite these hurdles, Westover pursued an education as a teenager, first attending BYU, and later earning first a Masters Degree and then a Doctorate from the University of Cambridge. It’s an almost unbelievable story, and at times very grim. One of the most disturbing things about it is that in spite of being a survivalist, and thus presumably more capable than the average person of, well, surviving, Westover’s father was incredibly careless with the safety of the family on many occasions. This resulted in grave injuries to Westover herself, her mother, her brothers, and finally her father himself, who was seriously burned in an accident that by the author’s account almost killed him.

Educated made for very compelling reading; I gave it a B+. 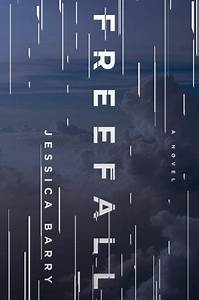 This was an Amazon First Reads pick. Allison Carpenter is on a small plane that crashes in a remote area in the Colorado Rockies. Her subsequent fight to survive is not just against the elements, but against a nameless and faceless tracker whose motives remain mysterious through much of the novel. Back at home in Maine, Allison’s widowed mother Maggie, who had been estranged from her daughter for years, is told that Allison is dead. Maggie searches for answers and closure with the daughter whose recent life is a mystery to her. The story interweaves flashbacks that reveal how mother and daughter became estranged and how Allison got into the trouble she finds herself in. Freefall is pretty absorbing, which I suppose is the main thing I look for in thriller/suspense fiction. The underlying characterization felt a little thin and rote to me, however. My grade for this was a B. 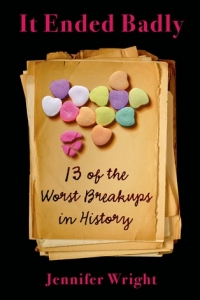 It Ended Badly: Thirteen of the Worst Breakups in History by Jennifer Wright

I think I looked up this book a while ago, but decided against getting it for some reason. I’m glad I looked it up again and ended up buying it; it’s a fun and light take on famous historical relationships. From Nero and Poppaea (I said fun and light, but forgot “also dark and twisted”) to Liz Taylor/Eddie Fisher/Debbie Reynolds, this is a gossipy but also informative take on some pretty bad breakups. My favorite tidbit is probably one that I had actually already read somewhere before: Lucretia Borgia appearing before Vatican judges who were tasked with determining whether she could have an annulment from her first husband Giovanni Sforza, claiming to still be a virgin. Except that she was HUGELY pregnant, but because her father was pope everyone just kind of ignored it and pretended it was just a burrito baby, I guess? There are many great little nuggets of history like that throughout this book, though there’s also plenty to make the modern reader angry, mostly involving bad behavior by various men (and a few women). I gave this a high B+. 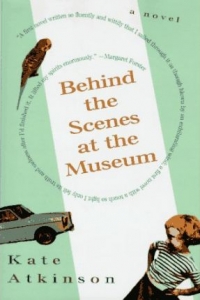 Behind the Scenes at the Museum by Kate Atkinson

Way back in 2013, I reviewed a fascinating novel by Atkinson called Life After Life. Though I enjoyed it quite well (I gave it an A-), it’s taken me this long to get back the the author. Behind the Scenes at the Museum is Atkinson’s first novel, originally published in 1995. It shares some qualities with Life After Life – an unusual structure and a setting that presents sort of a panorama of 20th century British history. The book’s heroine is Ruby Lennox, who exultantly begins the book with the line “I exist!” (she has just been conceived by her mother, the high-strung and perpetually dissatisfied Bunty and her bumbling father, pet shop owner George). Ruby’s voice feels semi-omniscient as she is able to narrate in utero, and at other times she references things she could not necessarily know (her parts of the book are told in first person present tense). These chapters are interspersed with “footnote” chapters that go back in time to examine the lives of Bunty’s grandmother, who runs away from the family with a traveling French photographer, and then Bunty’s mother Nell, whose marriage prospects are dampened by the carnage of World War I. Various other characters get footnote chapters as well. Sometimes the reasons they’re included aren’t entirely clear, though by the end there are some satisfying call backs that tie many of these footnotes together.

Behind the Scenes at the Museum contains a lot of tragedy, as well as the everyday unpleasantess Ruby experiences growing up with two rather awful parents locked in endless marital combat. But there is a lot of dark humor that leavens the worse parts; Ruby has a jaunty voice that suggests that she deals with the chaos and ugliness around her by putting on a cheerful face and staying out of the way as much as possible. I really liked her, and the book. My grade is an A-. 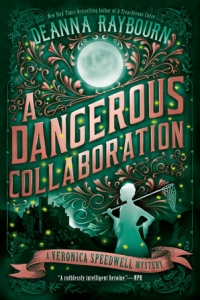 A Dangerous Collaboration by Deanna Raybourn

This fourth entry into the series felt tad claustrophobic at times, perhaps due in part to the island setting. The heroine, Veronica Speedwell, her friend and partner, Stoker, and Stoker’s brother are lured to the island under false pretenses, involving a rare butterfly (Veronica is a lepidopterist) that is native to it. But it soon becomes clear that the master of the island wants to find out what happened to his bride, who disappeared on their wedding day several years before.  Among the suspects are the man himself, his sister, his sister-in-law and nephew, and Stoker’s brother, who has a secret of his own. The resolution to the mystery was a bit blah, but I was glad to see some progress on the h/h relationship, finally. My grade was a B.

Get Well Soon: History’s Worst Plagues and the Heroes who Fought Them by Jennifer Wright

After reading and enjoying Wright’s It Ended Badly I picked up this, a series of essays on the history of various maladies, from the bubonic plague to polio. This one was informative and funny, though slightly less entertaining than the previous book. Perhaps that’s due to the at times disturbing subject matter, though I’m fairly callous regarding people dropping like flies centuries ago, and also fairly strong-stomached reading descriptions of effluvia and buboes, etc. Maybe I just preferred the slightly more person-focused perspective of It Ended Badly to this book’s science bent. Still, my grade for this one is also a B+. 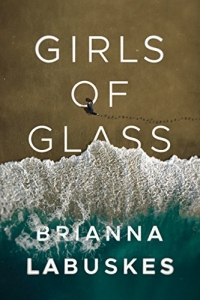 Girls of Glass by Brianna Labuskes

I got this for free from Amazon in my further delving into contemporary women’s suspense. Set in St. Petersburg, Florida, this is a gritty and rather unpleasant mystery that held my attention. A little girl is kidnapped and murdered. Suspects abound in her prominent family, from her fragile, troubled mother to her grandfather, a powerful local judge. The lead detective has a lot of baggage; her own young daughter was kidnapped and murdered five years before. Again, the story held my attention, but none of it was particularly believable, especially the revelation of the killer. The ending is shocking but in a way that felt artificial and inorganic. I gave this a B-. 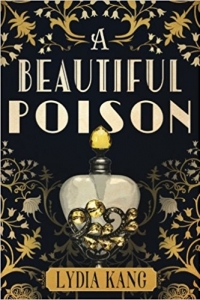 A Beautiful Poison by Lydia Kang

I’ve had this book for a while – it was published in August 2017 and I think it was probably another Amazon First Read. I came across it on my Kindle recently and reread the blurb to familiarize myself with the book again. I was excited to try it – a Gilded Age New York mystery, set against the backdrop of WWI and the Spanish influenza outbreak. I ended up almost skimming the book, though, because the characterizations just didn’t work for me. Three young people who were previously friends but went separate ways for various reasons come together again for an engagement party for one of them. A young woman that none of them like drops dead at the party, and the three of them conclude she was murdered and decide to investigate. More people die and the shifting relationships between the three – wealthy and self-centered Allene, beautiful and tragic Birdie, and callow Jasper – take turns that didn’t always make sense to me. None of the characters were that likable or sympathetic and the mystery wasn’t that interesting. As with the above book, I felt that the identity of the killer was long on shock factor and short on sense. I gave this a C+ in my book log, but I think I’m dropping it to a C.