I enjoyed all your earlier books in the Peter Grant urban fantasy series, from Midnight Riot (aka Rivers of London) to Moon Over Soho to Whispers Under Ground, although I put off reading book four, Broken Homes, because I had mixed feelings about your comments in the discussion thread following this post. 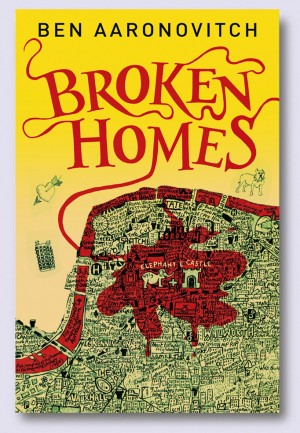 Then my husband and a good friend urged me to read the book, saying they enjoyed it a great deal. I decided to read Broken Homes to see what I was missing, but while I enjoyed some of it, it wasn’t to the same degree that I enjoyed your earlier books.

The book begins with a strange car accident. The driver, Robert Weil, runs a red light and hits another car, but when the police investigate, they find blood in the backseat but no sign of the missing passenger.

Police constable and magician’s apprentice Peter Grant receives an email alert because Weil is a member of the Little Crocodiles, an Oxford University dining club investigated by Peter and his cohorts in earlier books for dabbling in magic.

The car accident case turns up nothing of a magical nature, however, and life goes back to normal, which means that Peter and the coworker he’s had a crush on, Leslie, study for detective classes, learn Latin for their magic practice with their supervisor Nightingale, and begin work on crafting their wizard staffs.

Then a few other unusual things happen. A man named George Nolfi is hospitalized with burns after conjuring a fireball for his six year old granddaughter’s birthday party. He claims he hasn’t practiced magic since early childhood when his mother taught him a few spells.

Another man, Richard Lewis, kills himself, but his apparent suicide may be no suicide at all. And Peter stumbles on a German book whose title translates to On the Fundamentals that Underlie the Practice of Magic in the London Stolen Art Directory.

The beginning of this book felt exciting, with one incident of magical violence following after another. But that level of excitement wasn’t sustained and Broken Homes didn’t hang together quite as well as the earlier books.

As the most helpful positive review on Amazon points out and this plot summary shows, the structure of this novel is different from that of the earlier books. Rather than following one case, Peter and company work on a few cases before one turns up something that leads them to their archenemy, the Faceless Man.

Consequently, the book feels more disjointed and episodic than the earlier books. It meanders here and there but doesn’t gel into anything cohesive until the final third of the story.

On the upside, there is an interesting development in Leslie’s personal life. On the downside, I really missed the London history that was woven into the first three books. It felt like a significant loss.

The novel’s pacing feels off, too. After the exciting beginning, not enough headway is made on the cases being investigated during the long and sagging middle. In the final third, the engine of the story revs up and things finally start happening again.

Fortunately the writing is as witty as ever. Here’s an example:

Negotiating the inerface between the Folly and the rest of the police is always tricky, especially when it’s the murder squad. You don’t get to be a senior investigating officer unless you have a degree in skepticism, an MA in distrust and your CV lists suspicious bastard under your hobbies.

Tracking down the exploding granddad’s antecedents was yet another thing that was still sitting in the low priority things-to-be-done pile. It might have to be moved up.

“Indeed,” said Nightingale. “I’d like you to have a look at the house today.”

I still love Peter. He still has the same core of human decency and honor, and he still makes me laugh. He still comes up with creative solutions to the problems that he faces. He still wants to do the right thing by the people he cares about and by the people of London, whom he serves.

I still like Peter’s companion characters, from by-the-book Leslie to bright, curious Dr. Walid, to snooty-but-impressively-good-at-magic Nightingale to magic-sensing dog Toby. I still like the Rivers and the goblin Zack and the Quiet People and the other magical characters. The diversity of the cast (Peter himself is biracial—his father a white jazz musician and his mum a black immigrant from Sierra Leone) appeals to me as always, and the Faceless Man and those aiding him still scare me.

But much of Broken Homes feels like groundwork being laid for future books, and for the explosive twist that comes at the end of Broken Homes. For a reader who doesn’t foresee what happens, the big plot turn is likely to be impactful, and I’m sure its reprecussions will reverberate through the upcoming Foxglove Summer.

Unfortunately for me, I first started suspecting that this might be where the series was heading two books back. So for me, the twist wasn’t as twisty as it is for some readers. Rather than having the surprise come out of nowhere, I felt helpless as I watched what I’d predicted unfold, and a little frustrated that one or two characters who should have been able to anticipate it didn’t see it coming.

The introduction of two new characters with magical abilities makes me anticipate good things in book five, so I suspect I will be reading it. Then again, when I finished book three, Whispers Under Ground, I was sure we were in for some big things in this, book four. And to be fair I think that readers who don’t figure things out ahead of time may get that from this book to a greater degree than I did. C.