Please note: This review is for book three in a series, so it contains some spoilers for the previous two books. Readers who would like to hear more about the Peter Grant series but remain spoiler free are invited to check out the review of the first book, Midnight Riot (also known as Rivers of London).

I requested an ARC of Whispers Under Ground after enjoying the first two books in your urban fantasy/police procedural series, Midnight Riot and Moon Over Soho which detail the investigative and paranormal adventures of Peter Grant, a London police constable/wizard-in-training. 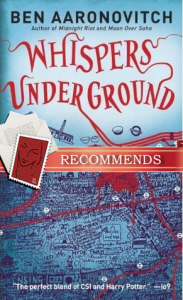 The mystery in Whispers Under Ground gets underway during the holiday season, with the discovery of a body in one of the tunnels for the London Underground (the subway colloquially known as the Tube). Peter is called in to the murder scene because Detective Inspector Miriam Stephanopoulos feels there is something not quite right about the crime.

It’s not clear how the victim, American James Gallagher, got on the tracks, even though it should be visible on CCTV camera footage. Furthermore, the victim’s boots are caked in mud that originated in the sewer, yet there is no access to the sewer on that stretch of tracks, although the sewer does run beneath the nearby streets. Then there is the murder weapon – shards of pottery on which Peter senses vestigia, the remnants of magic.

“How do you want to do this sir?” I asked. “AB do the murder and I do… the other…stuff?” AB being the radio abbreviation for Belgravia Police Station, where Seawoll’s murder team was located – we police never like to use real words when we can use an incomprehensible bit of jargon instead.

“After how that worked out last time?” said Seawoll. “Fuck no. You’re going to be operating out of our incident room as a member of the inquiry team. That way I can keep my fucking eye on you.”

I looked at Stephanopoulos.

“Welcome to the murder squad,” she said.

It turns out that murder victim James Gallagher is a US Senator’s son, and Kimberley Reynolds, an FBI agent, has been sent to investigate. Agent Reynolds proves to be a burr that is tough to shake, but Seawoll is determined that the FBI will not see any mention of magic or other “weird stuff” in her reports. That creates a challenge for Peter, who finds more magical pottery in Gallagher’s home, and taps Gallagher’s quirky housemate, Zach, to help him unearth the origin of the china.

Meanwhile, back at the Folly, Nightingale, Peter, Molly, and their magic-sensitive dog Toby have been joined by Peter’s friend and fellow constable Lesley May, now apprenticing herself to Nightingale alongside Peter. Lesley is still shy of showing her disfigured face in public but she takes off her mask a few times during this book.

Nightingale, Peter and Lesley conduct a stealthy (well, at least it starts out stealthy) investigation into the Little Crocodiles – former Oxford students who belonged to the same dining club as the rogue magician known as the Faceless Man.

As an unexpected snowfall shuts London down and Christmas approaches, Peter and his friends link clue to clue. Along the way they encounter a house that doesn’t exist, a dead river spirit, and a half-fae who may in fact be a half-goblin.

While Peter’s trademark witty narration is present in this book, Whispers Under Ground was a bit less funny than its prequels. There are still laugh-out-loud funny moments, but the book felt more serious overall. I missed the hilarity, but there was a tradeoff in that the toning down of the humor served to make Whispers Under Ground more compelling than its prequels.

One thing that chafed me was Peter’s use of the word “master” in reference to Nightingale, his mentor. It felt wrong when in the first book Peter made the point that being biracial, it wasn’t a word he would ever use.

Additionally, the sense of danger was more muted in this book, and there wasn’t the same kind of confrontation with evil during the book’s climactic scenes. Instead the resolution was quieter than I expected, making this book feel like a bridge between the introduction of the Rivers and the Faceless Man in the earlier books, and a conflict with them which is sure to emerge in later books.

We also never do get to know the murder victim well, so the outcome of the murder mystery wasn’t something I felt deeply invested in.

Despite all these criticisms, Whispers Under Ground is among the most enjoyable 2012 books I’ve read. Its pacing was tighter than that of Midnight Riot and Moon Over Soho. The storyline felt more focused and cohesive. The book engaged me at every point, including a gross chase through the London sewer system. It also benefited from the company Peter kept – one Sergeant Kumar of the British Transport Police, with whom Peter trades smart-alecky banter, and of course, the sharp-witted Leslie.

Lesley’s return to the canvas was especially welcome. Peter’s relationship with her is now different – both are practicing magic and living at the Folly, and their friendship is fraught with issues stemming from her disfigurement in book one. The ramifications of that injury are tentatively explored in a few lovely and heartbreaking scenes.

The dapper Nightingale, Peter and Lesley’s mentor in wizardly police work, is mostly relegated to the background, and not always in the most convincing fashion, but I expect we’ll see more of him in future books. The same is true of the teenaged Abigail, whose cameos bookend Whispers Under Ground.

A few of the Rivers make brief but welcome appearances – I especially loved Olympia and Chelsea’s. Above all though, the character I love best and root for the most is Peter himself. By this point in a series that follows the same protagonist, I am usually tired of reading about so-and-so, but that couldn’t be further from the case here. Peter’s package of charm, vulnerability, determination, bravery and humanity is something genuinely special.

I can’t think of the last time I had such sympathy and liking for a character without feeling the least bit manipulated by the author. There is no relying on a sad backstory here—Peter is refreshingly normal, yet also remarkably sweet. I liked him even more in this book than before, if that’s possible.

As usual for this well-researched series, London is almost a character as well. New nooks and crannies of the English capital are explored, and we learn things we didn’t know about it. Meanwhile, police procedure is also a part of the story, Peter and his friends conduct real investigative legwork in order to piece together the solution to the mystery.

This series has quickly become one of my favorite urban fantasy series, up there with (though very different from) Patricia Briggs’ Alpha and Omega series. I urge any fan of urban fantasy who hasn’t yet read the Peter Grant books to give them a try. B+/A-.