I’ve been recommending enough books here lately that I have started to worry that my grades are overgenerous. But when a book is as much fun as your debut urban fantasy/police procedural, Midnight Riot, what is a reviewer to do? 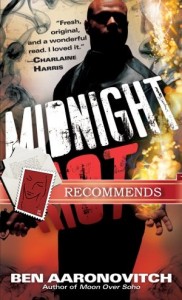 I picked up Midnight Riot (also known as Rivers of London in the UK) to read with my husband after I saw it recommended three times. The first recommendation came from a good friend whose taste in books is a bit lighter than mine. She loved your book and thought I might too. The other two recommendations were made by readers here at DA – this comment and this one. As it happens, I agree with the comments, and my friend was right— I thought your book was a delight from start to finish.

The first book in a series, Midnight Riot opens with Peter Grant, a young probationary constable with the London Metropolitan Police and the book’s narrator, guarding a scene in Covent Garden where a decapitated body was found. Peter’s friend and fellow probationary constable Leslie goes for coffee and when she is gone, a man who answers to Nicholas Wallpenny tells Peter that he witnessed the murder.

Only this was no ordinary murder and Nicholas Wallpenny isn’t an ordinary witness. When Peter asks him come and give a statement, Nicholas states that this would present a problem, since he is dead, and Peter “must have a touch of the sight” to be able to talk to him. And indeed, when Wallpenny steps into the light, Peter sees that he is transparent.

The ghost tells Peter what the victim and killer were wearing and where they passed one another and nodded in acknowledgement. He describes killer knocking off the victim’s head with what looked like a stick, and then going down New Row. He also says the killer was uncanny in his ability to change not just his coat and hat, but his face as well.

As soon as Leslie returns with the coffee, the ghost disappears. Peter thinks he’s losing his mind, so he does not share the ghost’s account with anyone.

Peter and Leslie are at the end of their probationary periods and the next day, they get their new assignments from Inspector Neblett. Peter is given a “horrifying assignment” – paper pushing in the Case Progression Unit. He is devastated to realize that “What Neblett was saying to me was that I wasn’t a copper, not a thief taker, but I might play a valuable role freeing up real coppers.”

To make matters worse, Leslie, to whom Peter is attracted, gets a far better assignment. The two go out to celebrate/drown sorrows and get plastered. Afterward, they discuss the differences in their approaches to police work and Leslie gives Peter a candid assessment of his professional flaws. The scene contains some great dialogue:

“Because I’m really good at it,” said Leslie.

“You’re not that good a copper,” I said.

“New Year’s Eve, Trafalgar Square, big crowd, bunch of total wankers pissing in the fountain—remember that?” asked Leslie. “Wheels come off, wankers get stroppy and what were you doing?”

“I was only gone for a couple of seconds,” I said.

“You were checking what was written on the lion’s bum,” said Leslie.”I was wrestling with a couple of drunken chavs and you were doing historical research.”

“Do you want to know what was on the lion’s bum?” I asked.

“No,” said Leslie. “I don’t want to know what was written on the lion’s bum, or how siphoning works or why one side of Floral Street is a hundred years older than the other side.”

“You don’t think any of that’s interesting?”

“Not when I’m wrestling chavs, catching car thieves, or attending a fatal accident,” said Leslie. “I like you, I think you’re a good man, but it’s like you don’t see the world the way a copper needs to see the world—it’s like you’re seeing stuff that isn’t there.”

But as it happens, it is exactly Peter’s ability to see stuff that isn’t there that gets him a better assignment. A depressed Peter tells a dapper stranger about his encounter with the ghost and the stranger turns out to be Inspector Nightingale, who comprises by himself a secret police unit in charge of investigating the paranormal. Within a day or two, Peter moves into The Folly, an old building protected by supernatural means, and begins training in wizardry and paranormal police work.

But Peter’s studies have only begun, and he and Nightingale are in a race against time, since no sooner do they find the killer of the decapitated man, than that man commits another crime and then dies, his face collapsed. And that is only the beginning in a string of violent London crimes.

Meanwhile, there is also a feud between a god and goddess of the River Thames which threatens to escalate. Can Peter get the god and goddess to make peace, and more importantly, will he solve the murders before someone he cares about dies?

One of the most charming things about Midnight Riot is its wit. Not only is the dialogue frequently snappy and funny, as in the example I quoted above, but Peter’s narration is at least equally witty. Even the descriptions are frequently amusing or snarky. For example, here is Peter describing his parents’ building:

The flats were solidly built, so at least I didn’t grow up listening to next door’s live docusoap, but they were built on the dubious assumption, so beloved of postwar planners, that the London working class was composed entirely of hobbits.

Beyond that, Peter himself is endearing and sweet. Despite his cleverness and his newly acquired magical abilities, his characterization feels grounded in reality. He is an ordinary policeman just learning how to solve extraordinary crimes, yet he is made heroic by the courage he shows even when he feels afraid and the tenacity he exhibits when giving up would be understandable.

The side characters are interesting and distinct. For example, Inspector Nightingale, to whom Peter apprentices himself, wears herringbone tweed, carries a silver-topped cane and drives an old jaguar. Leslie is “short, blond and impossibly perky even when wearing a stab vest.” But they are both more than these descriptions might make the reader think they are. Nightingale is older than anyone might guess and may be involved with his housekeeper, Molly, who has strange powers and a taste for raw meat. Leslie is keen witted, the furthest thing from ditzy despite her blond hair and her perkiness.

I also appreciated the way the book dealt with race, neither dodging the issue nor centering the story around it. Peter is biracial and prejudiced people sometimes mistake him for a thug, but this is just one of many facts in his life. While it is clear that he does face discrimination at times, and we get glimpses of both his parents, his ethnic background isn’t the be-all of his existence. Since I’m neither English nor black, I don’t feel qualified to say whether or not the book is authentic in its portrayals, but for what it is worth I enjoyed them and was never struck by any jarring notes.

I cannot confirm whether the book is well researched, but Peter comes across as knowledgeable about everything from the various departments of the English police to the history of a number of places around London, to his mother’s cultural background (she is an immigrant from Sierra Leone), and these details make the world of the book come alive.

In addition, the paranormal and police procedural aspects are melded beautifully in this book. It is an entertaining blend of fantastical goings on and investigative legwork. The mystery is at the center of the story, and yet it is also a vehicle for so much more: humor, fantasy, action, excitement, but best of all, the humanity that makes Peter so very worth rooting for.

I have just a couple of complaints – one is that even at the end of the story, after the villain was nabbed, there were still things I did not fully understand about that villain’s fantastical nature. The other is that I liked Peter so much that I wanted to get to know him even better and see more of the hopes, dreams and fears beneath his witty surface. In the end, though, Midnight Riot was such a good read that I gladly recommend it. B+.

→ Janine
Previous article: Wednesday News: Ways to Contribute to DA
Next Post: REVIEW: On His Honor by Jean Brashears