Back in March, I read and reviewed your terrific debut, Midnight Riot (Rivers of London in the UK), an urban fantasy/police procedural narrated by an endearing London police constable named Peter Grant. 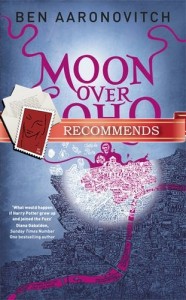 Peter is a new recruit in a secret (and very small) department of the London Metropolitan Police which investigates supernatural crimes. Moon Over Soho is the second book that follows Peter, and I’m pleased to say that like Midnight Riot, it was highly enjoyable.

The two books are closely related so it’s impossible to review the second without revealing spoilers for the first. Therefore, readers who have not yet read Midnight Riot and who don’t want to read spoilers for that novel should read no further.

Moon Over Soho begins a few months after Midnight Riot has ended. Due to the events that took place toward the end of Midnight Riot, Peter’s superior officer, wizard/Chief Inspector Nightingale, is very frail, and Leslie, a coworker on whom Peter had a crush, has been horribly scarred. Beverley Brook, another potential love interest of Peter’s, is still away from London, and the murder that took place at the end of the last book remains unsolved.

As Moon Over Soho opens, Peter is visiting Leslie, who conceals her disfigured face beneath a hood, a scarf, and sunglasses. Leslie wants to know whether magic can “fix” her face, but Peter doesn’t think it can. Soon after parting from Leslie, Peter gets a call from Dr. Walid, the department’s coroner, about a body which may belong to a victim of supernatural foul play.

At the morgue, Peter senses vestigia, the remnants of magic, emanating from the body in the form of the jazz tune Body and Soul. The dead man is a saxophonist named Cyrus Wilkinson. At Cyrus’s house and in the vicinity of his address, Peter meets Simone Fitzwilliam, Cyrus’s girlfriend, as well as Melinda Abbott, Cyrus’s fiancée. Later he locates the rest of Cyrus’s band, and in this way he learns that Cyrus died shortly after a big gig.

Further investigation reveals that Cyrus isn’t the only jazz player to die immediately after a brilliant performance. There appears to be some kind of supernatural being hunting down these talented men, and Peter is determined to find out why, how and who.

Meanwhile, two other murders with a very different MO take place. A dark haired, pale skinned woman seduces men only to bite off their sexual organs with her own. The vagina dentata case (featuring a killer with teeth in her vagina) from the previous book remains unsolved, but when a journalist/amateur practitioner of magic is killed in this same way, Peter is pulled in on the case.

Then there is Peter’s private life. While the investigation unfolds, an attraction blooms between Peter and Simone Fitzwilliam, the deceased Cyrus’s girlfriend, and their mutual infatuation grows consuming. Concurrently, Peter’s father, a former saxophonist somewhat famous in jazz circles, takes up the keyboard and hooks up with Cyrus’s band members.

Is Peter’s father in danger? Is Peter himself in danger? Who are the killers in each case, and can Peter track them down before they do further harm?

Moon Over Soho answers these questions and the joy of reading the book is at as much in Peter’s narration as it is the process of solving a paranormal mystery. The book crackles with wit and humor even as it tackles some dark subject matter. For example, here is a brief description of Camden Market, one of many funny bits in the book:

The important thing about Camden Market is that nobody planned it. Before London swallowed it whole, Camden Town was the fork in the road best known for a coaching inn called the Mother Red Cap. It served as a last-chance stop for beer, highway robbery and gonorrhea before heading north into the wilds of Middlesex.

The dialogue is equally wonderful. Take for example this bit, which deftly handles the race and diversity issues. Here’s Peter, who happens to be biracial, discussing the case his white supervisor, Inspector Nightingale, while they walk Toby, their dog. Since they are searching for the magician who trained the dead journalist, and Nightingale says there weren’t many people who could have done so in England, Peter asks about magicians from other parts of the world.

I asked about other countries—China, Russia, India, the Middle East, Africa. I couldn’t believe they hadn’t at least some kind of magic. Nightingale admitted that he didn’t really know, but had the good grace to sound embarrassed.

“The world was different before the war,” he said. “We didn’t have this instantaneous access to information that your generation has. The world was a bigger, more mysterious place—we still dreamed of secret caves in the Mountains of the Moon, and tiger hunting in the Punjab.”

When all the map was red, I thought. When every boy expected his own adventure and girls had not yet been invented.

“After the war it was as if I was waking up from a dream,” said Nightingale. There were space rockets and computers and jumbo jets and it seemed like a ‘natural’ thing that the magic would go away.”

“You mean you didn’t bother looking,” I said.

“It was just me,” he said. “And I was responsible for the whole of London and the southeast. It never occurred to me that the old days might come back. Besides, we have Dunlop’s books so we know his teacher wasn’t from some foreign tradition—this is a home-grown black magician.”

“You can’t call them black magicians,” I said.

“You realize that we’re using black in its metaphorical sense here,” said Nightingale.

“It doesn’t matter,” I said. “Words change what they mean, don’t they? Some people would call me a black magician.”

“You’re not a magician,” he said. “You’re barely even an apprentice.”

“You’re changing the subject,” I said.

“What should we call them?” he asked patiently.

“Just to satisfy my curiosity, you understand,” said Nightingale, “given that the only people ever likely to hear us say the words black magician are you, me and Dr. Walid, why is changing them so important?”

“Because I don’t think the old world’s coming back anytime soon,” I said. “In fact, I think the new world might be arriving.”

As I stated in my review of Midnight Riot, Peter is a loveable character. He genuinely cares about every life he attempts to save and wants to believe that a good outcome is possible. At the same time, he isn’t blind to flaws, especially flaws in systems, and can snark with the best of them.

Still, I liked him a little less in this book than I did in Midnight Riot, perhaps because he struggled less in this one. It seemed like he had grown not only better at his work, but also significantly more physically coordinated, to a degree that seemed less than completely believable given the span of three months that had passed between the two books. It also bugged me that he was occasionally distracted from his casework by his involvement with Simone.

Additionally, I found the vagina dentata idea sexist and if the female character this subplot centered around hadn’t been treated so respectfully I might have been offended. That I was able to go along with it is a testament to the sensitivity and humor with which every subject in this book was approached.

In other ways, though, Moon Over Soho was a stronger book than its predecessor. The mysteries at its center were even more compelling, the investigative legwork was still there, and this time, the villains’ paranormal abilities were explained more clearly than in Midnight Riot.

Most importantly, though, I felt that this book dug deeper into the characters and I got to know them better. Though I am starting to get the sense that Peter will never be the kind of touchy-feely guy who talks about his emotions, those emotions nonetheless came through more in this book.

Readers who are looking for a great urban fantasy series with a fresh setting, endearing and vulnerable characters, a threatening villain, humor as well as substance, and smart writing can’t do much better than this one. B+/A-.