REVIEW: Call on Me by Roni Loren 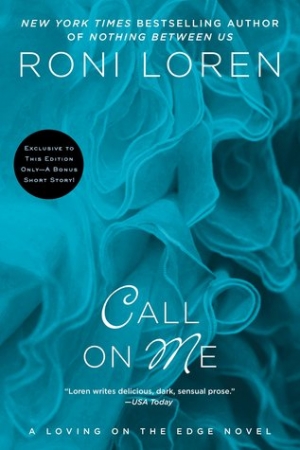 Here is proof that back matter in books is a useful marketing tool (at least on me).  When I read Nice Girls Don’t Ride recently, the first chapter of Call on Me was included in the back.  It immediately went on my wishlist and now, here I am reviewing it.

Call on Me is book 8 in the Loving on the Edge series but I think it stands alone pretty well.  I haven’t read the other books in the series (although I’m more likely to try and pick them up now) and I didn’t have trouble following the story. Yes, characters from previous books appeared but they served the story and weren’t intrusive. Every now and then there would be a hint of what went on behind closed doors for the other couples that pique my interest – I think that’s probably a good thing.

James Pike Ryland (“Pike”) is the drummer in the indie band, Darkfall.  He’s excited about his music but feeling very jaded by the groupies and meaningless sex constantly offered to him.  He’s not poor little rich boy about it, but he’s decided that it’s time to grow up a little and pull back on the partying.  One of his buddies ropes him in to doing a favour for his sister-in-law’s charity.  Bluebonnet is a facility which, among other things, helps with after school programs, particularly for underprivileged kids. They want to start a college fund for the kids in the music program.  What starts out as one-off charity performance for the parents and friends of the Bluebonnet kids becomes a CD sold for profit on iTunes and a live performance after to a much wider (and richer) audience.

The receptionist at Bluebonnet is Oakley Easton. She also helps with the music program in the afternoons and hopes that by working on the charity project she will finally earn a promotion to project manager. She is a single mother to 11 year old Reagan.  Reagan is on the Autism spectrum and Oakley struggles to pay for her private school fees on her receptionist wage. The school has very small classes and is very understanding of Reagan’s needs and she is thriving there, unlike when she went to the local public school.  The project manager job double her regular salary and would mean she’d be able to quit her night job as phone sex operator, as well as keep Oakley in school.

Oakley and Pyke have to work together on the charity music project.  Pyke initially comes across as a bit of a player and Oakley has no time for that. However, it’s not really an enemies to lovers story as they don’t stay at odds for long.  Both learn that there is more to the other than a first impression and, as they work on the project, they gradually become friends who decide to explore their attraction in a no strings kind of way.  Pyke pursues Oakley beyond her initial no but I didn’t find him to be obnoxious about it. He pushes Oakley beyond her comfort zone but my impression was that if she were serious about not wanting anything but a professional relationship with him, he could easily have stopped her. He never pushed her into any sexually –  he enticed and seduced but Oakley was always on board and fully consenting.

Pyke quickly works out that Oakley is also “Sascha” but just to check he calls her – and there follows the hottest phone sex either has ever had.  (Although, for Oakley, this is easy to do because her job has never aroused her. She does it strictly for the money.)

Pyke now knows that Oakley is basically his ideal woman:

Because nothing was hotter to him than a woman who had her shit together during the day but who could also let loose and play dirty at night.

and he is determined that they scratch each other’s itch.

When this couple get dirty, they get dirrrrrty and their sex is creative and hot.  While Pyke has been a member at “The Ranch” (the sex club around which the books are loosely based) for a while and has dabbled in both dominance and submission, he’s never before thought of himself as a Dominant.  However, Oakley brings out something in him and, in Pyke, Oakley discovers she likes it a little rough and even has a bit of masochism in her. I liked how they defined their sexual relationship for themselves, without regard to what the “traditional D/s” relationship might be.  They are always safe, sane and consensual but there’s no “Sir” for example and Pyke thinks of what they do as a little on the messy (as opposed to strict) side but it works for them.

When Oakley was a teenager, she was in a girl pop group and had some success touring the country. She was taken advantage of by the group’s much older manager and ended up leaving the band, pregnant and alone, except for her beloved brother, Devon. Oakley is a talented musician in her own right and has a deep love of songwriting.  Reagan is also musically talented and part of the story arc is Oakley letting go of her own past and allowing Reagan to explore music for herself.

There are a couple of plot threads which seemed a little unfinished to me. My impression was that they were in the story to create some tension and angst but not much else. Not everything has to be resolved in a book of course and there are some things which aren’t ever going to be fixed.  However, in the context of this book, I wondered what would happen with Pyke and his sisters, if anything, and I remained curious about Liam and how much of a threat he posed to Oakley and Reagan going forward (if any).

The story takes a somewhat predictable and unexciting turn about 1/2 – 2/3 in.  I appreciated that you describe Oakley’s reactions as not logical and I thought Pyke did the best he could in the circumstances. He tried hard to be a good guy.  I liked that the later opportunity for a big misunderstanding was limited by a quick and telling conversation.

I’m not super familiar with Autism Spectrum Disorder but my impression was that Reagan was fairly neurotypical in many ways and it was only when it served the plot that she wasn’t. Perhaps I’m being too harsh but I’d love for someone with more knowledge of the topic to weigh in here.

I’m not entirely sure I believed the end resolution to Pyke’s career issue – I’m not sure it would work in the long term, but I did like that both Oakley and Pyke had fulfilling careers to look forward to.

Oakley and Pyke had rich chemistry and their interactions were at turns, fun and sexy and deep and vulnerable. I enjoyed watching them fall in love through the pages. While there were some things which didn’t work super well for me, the romance (ie the essential part of the story) certainly did.  Grade: B