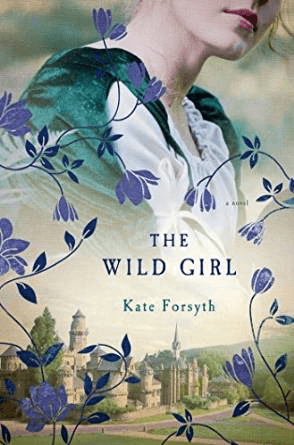 One of six sisters, Dortchen Wild lives in the small German kingdom of Hesse-Cassel in the early 19th century. She finds herself irresistibly drawn to the boy next door, the handsome but very poor fairy tale scholar Wilhelm Grimm. It is a time of tyranny and terror. Napoleon Bonaparte wants to conquer all of Europe, and Hesse-Cassel is one of the first kingdoms to fall. Forced to live under oppressive French rule, Wilhelm and his brothers quietly rebel by preserving old half-forgotten tales that had once been told by the firesides of houses grand and small over the land.

As Dortchen tells Wilhelm some of the most powerful and compelling stories in what will one day become his and Jacob’s famous fairy tale collection, their love blossoms. But Dortchen’s father will not give his consent for them to marry and war, death, and poverty also conspire to keep the lovers apart. Yet Dortchen is determined to find a way.

The story contains long sections that include incest and physical abuse of Dortchen. Then there’s a long part that deals with her attempts to overcome what was done to her.
If these are triggers for you, I STRONGLY urge you to consider if you should read this book.

I’m still delighted that there are people with PhDs in fairy tales and that you’re utilizing your knowledge to write books. Last year “Bitter Greens” was one of my surprise finds and, looking back, when I posted my review I said something about not being too sure of this book given what I’d read about it. I should have listened to myself. “The Wild Girl” has a lot going for it but also much that leads me to caution people about reading it. The life and sparkle and cleverness of “Bitter Greens” I found to be absent here. This is endless, soul sucking slogging – though well written.

The first 1/5 of the story is devoted to the attraction of young Dortchen for Wilhelm Grimm amid Napoleon’s conquest of Europe. Both the Wild and Grimm families had many children and keeping everyone and their quirks and personalities straight got trying. It was also a downer given how poor the Grimms are and how oppressive the Wild household was. I wanted the relationship between Wilhelm and Dortchen to advance but instead I learned far more about politics and the battles in a dry and “at arms length” manner. No spark here.

Then there’s endless pages of everyone dumping on Dortchen. She was at everyone’s beck and call and basically except for the Wild household servant Old Marie, the rest were a bunch of useless whiners whingeing for Dortchen to do it all. “Do this, do that, Oh, what will we do? Please Dortchen help me with this or that or the other.” Her father is a tyrant at the best of times, her sisters complain and her mother makes a career out of her nerves. Meanwhile selfless Dortchen works her fingers to the bone with little to show for it.

But wait, just as I thought things couldn’t get worse, they did. Vater Wild makes life a misery, endless wars lead to more taxes, and Dortchen’s only brother gets drafted leaving his daughter and useless French wife with the family before heading off to fight in Russia. And we know how that will turn out. I found myself yelling at most of the characters to either help Dortchen or shove off and that included Wilhelm. Even this stuff appeared good, though, after Dortchen began to be abused.

The last part of the story, where Dortchen works through and emerges from the horrors done to her, buoyed me up enough that I didn’t feel as if I was still buried under toxic sludge. It is a span of transition for Dortchen finally leading to her well deserved and too long awaited happiness. But even this is a long time in coming.

I get that this is supposed to show Dortchen as the long suffering heroine of a fairy tale before she finally gets her HEA but in most fairy tales this part gets fast forwarded and glossed over in a few pages. Here I felt every day of the interminable years and when weak Wilhelm shows up yet again whinging for more stories from poor, overworked Dortchen, I felt like growling at him, “Get a job, you bum and your useless siblings too.” And since everything is told from Dortchen’s POV, it’s endless drudgery and hopeless longing for Wilhelm.

Since these are real people, there’s no way to rearrange the story and bring on the HEA sooner. It’s also impossible to know if the suppositions about Dortchen’s life are correct. I just know that despite the evocative writing and ending, it was too long a slog through too much heartache. Dortchen’s story might or might not ring true for survivors of emotional, physical and sexual abuse but it’s not one I’d read again and I would caution readers to be aware of what they’re getting into. This one is hard to grade. It’s well written, emotionally wrenching and has a happy ending that appears to mirror their real life but I finished it wanting to take a handful of Prozac and a long bath. C