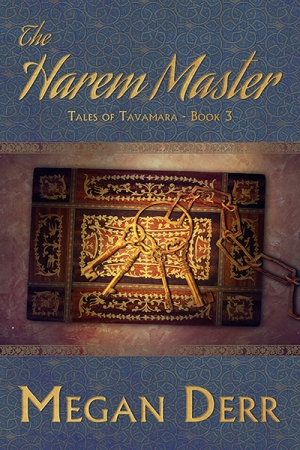 Crown Prince Ihsan returns to find his home in turmoil, and the royal court so full of vipers it’s impossible to say which of them will strike first. Removing his father from the throne, one way or another, should be a simple matter. Staying alive and proving himself a worthy king will be far more difficult.

Crown Princess Euren has spent the last five years in hiding so that she could not be used against her father or Ihsan. But she is the daughter of a soldier, never meant to wear a crown, never trained to fight battles where words are the weapon of choice. If she hopes to keep herself and her loved ones alive, she’ll have to learn fast.

I have bought and read vast majority of your works and I believe I have read the first book in the Tavamara Series. I do not think I have read the second one, which looks like a collection of short stories, and based on the blurb Prince Ikram is featured in one of them during the time he was absent from Tavamara. I cannot tell if any other characters from this book are featured in the other one, but I do not think readers will be confused if they start with this one. I know I was not confused.

Tavamara is based on some sort of eastern country (the world-building is a bit sketchy), but what we need to know is that one of its most well-known practices is that royalty gets to maintain harems. I am not sure whether any noble gets to have one or only Kings and Queens are allowed, but my impression is that crown princes and princesses get to have them too. A harem consists of people who are usually of noble birth and who decide to dedicate their lives to serving, adoring, and loving their royalty. It is not a slavery, it is a position of great respect – or at least it should be.

When our story begins Tavamara is in turmoil – the tyrannical King abuses his concubines on a whim, executed his daughter for getting pregnant out of wedlock, sent one son into exile, and another son (Ikram) left the country with his new wife five years ago. Harems, which are almost a sacred practice in Tavamara, are threatened with destruction and harem master Demir, who is responsible for the training and protection of his concubines, is almost at the end of the rope. Demir has spent his life serving the royal family, but now he cannot wait for somebody to do away with the tyrant.

Prince Ikram comes back from war and announces he has brought his own Harem with him – one of his noble friends, his former bodyguard and a guy whom he met while fighting and being imprisoned somewhere. The names of the countries are all fictional, so it really does not matter whether I name them or not. So, I think the best way to describe what these four have is a polyamorous relationship. They are all in love with each other – three guys decided to join Ikram’s harem because he loves them and they are deeply in love with him. There are several scenes of all of them making love together. I guess in this sense the book is not a romance. The principal relationships are already formed when the story begins and they are not broken except through attempts at assassinating and kidnapping certain people during the course of the story.

A little bit after Ikram comes home, his wife Euren, who left almost at the same time he did, also comes home with her own harem which initially consists of three women. Euren spent most of those five years in a monastery doing some helpful smuggling and improving her knife throwing and lovemaking skills. Seriously, I thought Euren rocked as a heroine – she is the tough as nails daughter of the Palace Captain of the Guard who grew up playing with Prince Ikram and his alleged betrothed, and who “stole the prince and then turned around and stole his betrothed too”. That means that Aisli became the first member of her harem and of course Euren did not steal anybody – they just all fell in love with the “wrong” people. Euren also has a polyamorous relationship with her harem, they are in love with her and she is in love with them (and with her husband too and vice versa). I really liked the parts when Euren was settling down in her role of Queen and I thought the way she learned to deal with the Council was very well done. I also liked the matter of fact statement that Euren was supposed to inherit the “Captain of the Guard” title from her father; it told us a lot about what kind of country Tavamara is and the role of women there.

I have said that the book is not a romance and I maintain that for the most part it is not – it has a fun and twisty plot of courtly intrigue, scheming counsellors, and lots of assassination attempts. I enjoyed the heck out of it. However I guess that there is some semblance of a romantic storyline in it, because at the end of the story one more person joins Ikram’s harem and one more person joins Euren’s harem. I think that the tension of whether he would admit his feelings/ would they succeed could be considered a romantic storyline. I thought m/m part of it was better done, in more depth than its f/f counterpart.

My main criticism is about characterizations and it is a big one – while I thought that the main three characters were superbly done, I just did not feel that any of the concubines except maybe Kit had any depth in their characters. That was especially jarring in regard to the women. At least Aisli was more than a name, but I did not think that two other women were more than a name despite the fact that they all play pretty big parts, it is not like they are minor characters.