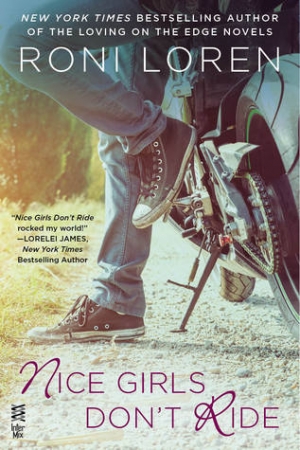 Nice Girls Don’t Ride was previously released as part of the (no longer available) Riding Desire Boxset and has now been released as a stand alone novella. I was pretty much delighted by this story. I enjoyed both main characters and their connection with each other. I liked the humour and the snap of their banter and the sex was pretty hot too.

Most of the story takes place in one night and I enjoyed the tight focus which allowed me to see the characters getting to know one another over the course of the evening.   The main story ends in a hopeful HFN and an epilogue a few months later beds that down.  Because the characters are only 21 and 22 respectively, I personally wouldn’t call it a HEA ending, but only because of their age and that things are still fairly new between them.

Natalie’s car has broken down on the side of the road on a hot Texas day.  It’s her 21st birthday and she’s heading to her boyfriend so they can share a special dinner together.  She hopes he will ask her to move in with him.  They’ve been dating for a year and she will have to move soon anyway because reasons.  Natalie has dressed up in sexy lingerie and borrowed a sexy dress and has high hopes for a special evening for her and Caleb.  Being stuck, sweaty, on the side of the road did not feature into her plans.

When a tow truck driven by our hero, Monroe, arrives, she is initially suspicious.  His truck is not from the company Triple A told her would be coming and she’s not in the best part of Austin.  However, Monroe really is just offering help and after taking some sensible precautions she accepts his offer to tow her car.

Natalie comes from a low socio-economic background and has tried hard to fit in with a more elite college crowd.  Her boyfriend is a trust fund baby and Natalie doesn’t want him to ever think she is lowbrow.  She has almost become someone else for him – mild mannered, acquiescent and quiet.  With Monroe, right from the start, Natalie doesn’t feel any need for pretence.  Monroe, for his part, loves a girl who will stand up for herself and isn’t fazed at all by her forthrightness.  He can’t help but notice she’s very good looking but he initially assumes she a stuck up sorority girl and therefore not for him.

Monroe forms a pretty dim view of Natalie’s boyfriend when he (Monroe) realises it’s her birthday.  It is only made worse when Caleb bails on his and Natalie’s special dinner.  When it turns out that Caleb has ditched Natalie on her birthday in order to use their special dinner reservation for an intimate dinner with someone else, Natalie is livid.  Monroe is happy to give her a ride to the restaurant so she can give Caleb a piece of her mind.  He even (generously) offers his services if she wants to put on a show  for Caleb re just what he’s going to be missing from now on.

Natalie is devastated by Caleb’s betrayal and plans on going home to mope but Monroe gives her a better option.

“But there’s another option besides finding a place to crash.”

She shoots me a suspicious look, but I can tell she’s working hard to keep it together. The girl has had the shit day of all shit days. And the minute she slows down, it’s going to take her down hard. So I know what my job needs to be.

“The other option is you don’t go to sleep at all.” I pull my phone from my pocket and show her the time. “It’s almost nine. Sun’ll be up in about ten hours.”

“If you’re going to mope around, yes. But you know what they say about time flying. All we need to do is find something fun to do each hour. Then you can walk into your place looking like the badass wild girl you want them to think you are.”

She gives me a skeptical lift of her brow. “You want to spend the next ten hours with me? We don’t even like each other.”

Wrong. “I’m liking you better all the time, princess. Come on. Get on the bike. Hour one, I’ll take you to my favorite bar, and you can tell ’em it’s your twenty-first. Everyone will buy you a drink.”

(Clearly Natalie is a girl after my own heart.)

They spend the rest of the night having fun, talking and eventually making out and more.  To her credit, Natalie initially refuses sex with Monroe because she doesn’t want him to be a rebound guy. While she has no objection to one night stands, she believes they ought to be about the connection of the people in question and not as revenge for the hurt caused by someone else. Monroe never pushes and, while he makes his interest in her very clear, he does not seek to take advantage and is always a gentleman.  Over the course of the night however, her attraction to Monroe grows and by the time they have sex it is definitely all about the two of them.  Monroe has a cocky charm but never delves into asshole territory.  He’s also much more than appearances – tattooed bad boy riding a motorcycle – would suggest.  In fact, both Monroe and Natalie are more than they originally appear to be.

Monroe has plans to travel around parts of the US for a couple of months in a camper van and then spend the last month of the summer house-sitting in a friend’s South Carolina beach condo.  Natalie has nowhere to live and nowhere particular to be for the summer.  It’s not hard to see where this is heading.

I actually think it would be a great feel-good movie.  It could easily be told in a couple of hours and, with the right actor and actress playing the main roles, it could be a lot of fun.  Someone should get right on that.

At a little less than 80 pages, it’s a short read but I didn’t feel anything important was left out.  The story was just right for its length.  I thought it captured the vibrant youth of the main characters in an authentic way and, the more open-ended HFN suited both the timeline and the characters.  I can definitely see this couple together for the long haul but it wasn’t necessary to establish that here.

There is some ableist language, used by Natalie mainly, that I could have done without and I suppose some of the characterisation was a little simplistic.  Caleb was just an entitled dick and nothing more, and I wasn’t entirely clear how and where Jess and Rebecca fitted into Natalie’s life.   Nevertheless, I got the strong sense that both Monroe and Natalie were fully realised characters, even if the entirety of it didn’t make it to the page.  That is to say, I feel that you had a good idea of what these people do and why and what makes them who they are and it showed.

I pretty much loved it.

“Come on, seriously. Putting aside the question of whether you’ll be able to resist my infinite charm or not, no one should spend her twenty-first birthday alone, especially after that spectacular throwdown upstairs. It’s time to celebrate.”

“No, it’s time to get a pint of ice cream and do an ugly cry. Because I guarantee you, as soon as this adrenaline wears off, it’s not gonna be pretty. You need to get out while the gettin’s good because it’s gonna be all snot and chick flicks in an hour.”