REVIEW: Live For Me (Blurred Lines, Book 2) by Erin McCarthy 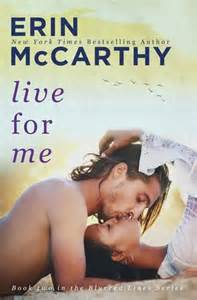 I managed to make it all the way through the first book in the series without realizing that it was based on Wuthering Heights, even though the hero and heroine were named Heath and Cat. In my defense, it was definitely a loose interpretation. The parallels between Live for Me and its inspiration, Jane Eyre, were a lot clearer, which ended up being both a strength and a weakness in the book.

Tiffany Ennis is only 18, but she’s lived a pretty tough eighteen years. Her father was never in her life, her mother was a drug addict who died when she was young, and she was in and out of foster homes until her grandmother took her in as an adolescent. That was hardly a refuge, though, since Tiffany’s grandmother was both verbally and physically abusive and mostly seemed to want her granddaughter around as an unpaid servant. One day during an argument her grandmother throws Tiffany out for good, which ends up being something of a godsend.

Tiffany is able to stay with friends (the couple from the first book) while looking for employment, and is lucky enough to quickly land an extremely cushy job as the caretaker of a mansion owned by a music producer from New York. She figures she will have solitude on the remote estate in Maine (near the desolate island where she grew up, Vinalhaven), since the owner is rarely there. She can save her salary up for school, where she hopes to get a nursing degree.

Tiffany’s solitude is interrupted on her very first night alone in the house, though, when the master of the house appears. Devin Gold turns out not to be the old man Tiffany had assumed he would be – instead he is 30, ridiculously handsome and something of a savant in the high-powered music world in New York. His unexpected arrival (along with his dog, Amelia, who immediately takes a shine to Tiffany) upsets Tiffany’s equilibrium; she finds herself unexpectedly attracted to him and unsure and awkward about it (understandable, since he’s her boss, much older and in every way has far more power than she does).

I’m sure there are readers who will stop right now and decide that this is not the book for them – readers who don’t like big age difference and/or power differential between the h/h in their romances (such readers are pretty common in my experience). Some of those same readers probably disliked Jane Eyre for similar reasons. But what made the situation a lot less icky (to use the technical term) for me, in both cases, was the heroine. In both Jane and Tiffany we’re given a heroine with a very strong sense of self, one that can’t be cowed or manipulated even by an older and more powerful hero. That’s not to say there aren’t crunchy moments, though.

In Live for Me, it also helps that Devin does try to keep his distance from Tiffany, and is clearly troubled by the age difference. This contributes to my confidence that Devin was attracted to Tiffany in spite of, rather than because of, her youth. There is some contrasting of Tiffany’s unspoiled innocence in relation to Devin’s jaded and corrupt NY friends, but that dynamic seemed to have little to do with her age and it’s one that I see in a lot of romances, anyway (too many, IMO; I understand the appeal of the trope but it’s not a favorite of mine, especially as I’ve matured).

Still, as I said, there were some squicky moments; it doesn’t help that Tiffany is very small in stature (as was Jane in JE, but I don’t remember getting the sense that she looked like she was 14, as I do here) and that at one point another character mistakes Tiffany for Devin’s daughter. The issue sort of faded into the background for me as the story went on and the characters (especially Tiffany) became more fleshed out in other ways, but I could definitely see it bothering other readers. I really could’ve done without the hero’s music industry nickname “Gold Daddy” and the way it’s used in an inane and distasteful conversation that Tiffany overhears between Devin and one of his bimbos.

In spite of all of that, there was a point probably halfway through the story where I was really riveted – I had that “don’t want to put the book down” feeling that is really unusual for me. (Is it weird that even as an avid reader I don’t usually have trouble putting a book down? I feel like it is. But I digress…) I don’t know that I can even clearly articulate *why* I was so absorbed, but I think it probably had a lot more to do with Tiffany than with Devin. Sure, part of it is that she is the narrator and the reader is privy to her thoughts; it’s natural under those circumstances to identify with her more. But Devin himself is just not *that* interesting, I don’t think (or to put it a different way, the reader isn’t given enough insight into what is interesting about him). He seems to have had a fairly happy childhood, followed by a super-successful career (one that doesn’t always make him happy, but that’s not so tragic) and an unhappy marriage. The marriage though, in contrast to Rochester’s in Jane Eyre, wasn’t the result of family pressure or trickery (I mean, his ex was definitely manipulative but the marriage itself mostly seemed to be the result of youthful foolishness on his part). There just doesn’t seem to be that much reason for Devin to be the brooding anti-hero who exiles himself in torment on his remote estate. (To be fair, this portrayal of him was rather fitful, so maybe it’s unfair for me to hang it on him, but OTOH, the inconsistency in characterization was its own problem.)

The story started to fall apart for me in the last third or quarter, mostly due, I think, to the characters acting in ways that didn’t really make sense but corresponded, roughly, to the plot of the Bronte novel. First Devin is senselessly and extravagantly cruel to Tiffany for no real reason, except I guess to drive her away by showing her the “real” him.Then she finds out something about him that throws her for a loop, and flees. This is clearly meant to correspond with Jane fleeing Rochester after finding out about his mad wife in the attic in Jane Eyre, but the parallel doesn’t work on several levels: first of all, the revelation, while upsetting, is not nearly on a par with the one in JE and 2) she doesn’t flee right away, but rather dithers around some, allowing herself to be taken to Devin’s apartment in New York before deciding she just can’t handle his world and its complications. Which makes her seem flighty and reinforces for me that she’s a goddamned teenager who doesn’t have any business being involved in such a serious relationship with a much older and more worldly man. Which was a fact I’d successfully avoided for a good part of the book; I resented being reminded of it.

As an aside, one (minor-ish) point – Tiffany alludes on several occasions to being biracial. I would have liked to have seen this further explored – as it was we never even find out what ethnicity her father is. I thought that was a little strange; it would seem to me that growing up biracial in a place as white as Maine (94.4%, if Wikipedia can be trusted) would’ve contributed to some of Tiffany’s sense of alienation. Maybe it did, but we didn’t hear very much about it, which I found a little disappointing.

Overall, as a take on Jane Eyre (there are a lot of parallels thrown in – again, way more than I found in You Make Me/Wuthering Heights – but probably detailing them would be spoilerish?) this wasn’t entirely successful, and I couldn’t help but think it would’ve worked much better if the conflict in the last third had been reworked. I’ll also say that to the degree that it was “good” it was more on an emotional level than a literary one (I don’t say that to be snobbish but just to make it clear that there are probably a lot of readers who might not have the emotional connection to the book that I did). And I’ll just reiterate one last time that it was mostly the heroine who made the book for me (which is a big thing, obviously, in a first-person story – liking/relating to the storyteller). My final grade for Live for Me is a sort-of-shaky B+.

→ Jennie
Previous article: REVIEW: A Forbidden Rumspringa by Keira Andrews
Next Post: Making Sure your Kobo book can be downloaded