REVIEW: You Make Me (Blurred Lines, Book 1) by Erin McCarthy 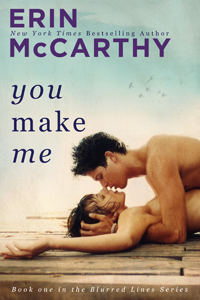 Let me say right off the bat that I had a hard time grading this book; its ultimate grade was not a reflection on the writing, plot (well, mostly not) or characterization, but rather my dissatisfaction with the ending. I am not sure I can say a lot without getting into spoiler territory, but I’ll just say that this is a romance, and it has an HEA, and that’s what I was not happy about. Based on the story and the actions of the characters, I didn’t think the HEA was appropriate.

Caitlyn Michaud is a starting her junior year at the University of Maine as a Business major. She’s well-liked, a member of a sorority, has a best friend (Aubrey) and a steady boyfriend (Ethan; he happens to be Aubrey’s brother). Her life is well-nigh perfect, and the night of the Homecoming Dance she reflects on how far she’s come from where she grew up.

Cat (as she was known before coming to UoM) was raised on a small and remote island of Maine; her family was poor and somewhat notoriously dysfunctional. Cat’s mother was mentally ill and permanently disabled due to electroshock treatments she’d received for her illness when Cat was a baby; her father was a fisherman who lost a hand on a lobster boat and afterwards went on disability. Cat’s only sibling, her brother Brian, is a ne’er-do-well and alcoholic. Growing up, Cat’s family took in a succession of foster children; the income helped support the family and hold the dilapidated family home together. Cat was a lonely little heathen for much of her childhood, unkempt and friendless. Her life changes at 15, when the family welcomes a new foster, 17-year-old Heath. Heath and Cat become friends and then more, but right after they make love for the first time, Heath disappears. The only explanation Cat is given is that Heath is now 18, and has aged out of the foster care system, but she doesn’t understand why she doesn’t hear a word from him, after all they had shared.

Cat goes to college, becomes Caitlyn, and puts the past behind her. Her father dies; her mother is confined to a nursing home, and Cat no longer speaks to Brian after his disgraceful, drunken behavior at their father’s funeral. The night of the Homecoming Dance, Ethan proposes to Caitlyn in front of all of their friends and assembled sorority and fraternity members. It’s as she accepts that Cat sees a familiar face in the crowd. Yes, Heath has returned.

It turns out that Heath has been in Afghanistan, among other places, and has only just gotten back to Maine. And oh, he wants Cat back. His explanation for leaving without a word is not very strong (later revelations don’t make it much more defensible, IMO). He’s not happy to find Cat engaged to another guy, but really, what did he expect? She didn’t know where he was, and didn’t know if she’d ever hear from him again. Still, he declares his intentions to fight for her, and Cat doesn’t entirely discourage him.

Not a lot really happens in this book; most of the focus is on Cat’s internal struggle. Ethan is a mostly good guy who seems to really love her; I kept expecting him to lapse into predictable villainy, but he never does. He does let Cat down, which in some ways makes her decision a lot easier (and thus less dramatic, and less of a choice at all).

The central problem with You Make Me is that it doesn’t work as a romance. Cat’s conflict is set up as very black or white: Ethan and upper-middle-class respectability and a finance job OR Heath and a return to an island she really doesn’t seem to care for (Heath wants live there and be a fisherman). The central Ethan v. Heath conflict is pretty much a no-brainer, from a romance perspective, anyway. Ethan is safe and boring and Heath is Cat’s “other half” – exciting and a little dangerous. But the reality of Heath is that he:

It’s not that Heath is a villain – he’s really not. He’s someone who has had a hard life, even moreso than Cat, and is after all still very young (about 22 or 23, I think). I definitely think he acts like a jerk sometimes – the same could be said for Cat herself and for Ethan. It’s realistic in a way, but it points up the problem with trying to tack an HEA on a NA story, especially one about young people who are already kind of screwed up. None of these people are stable or mature enough to marry, and why do they have to be? If they were real 20- and 22-year-olds, I’d tell them to date around, have some flings, spend some time alone. But the strictures of romance and the conventions of “one true love” stories dictate that Cat has to make a choice, and that choice has to be made within the confines of the story and has to be for all time (the “ever after” part of “happily ever after”).

I don’t know; maybe this is a problem I’d have with all romances if I thought about it too much. But in historicals, where characters are expected to marry younger, and presumably not to divorce, it’s just not something I question. In contemporaries where the characters are 10 years older – hell, even five years older – the shakiness of the HEAs just don’t feel as glaring. In a story with characters this young, and with as many signals that both the hero and heroine have issues that need to be worked out before they can be in a healthy relationship – the HEA feels both unlikely and just plain inadvisable. For that reason, I’m giving You Make Me what feels like a harsh grade – a D. It’s not badly written and it held my interest, but as a romance it just doesn’t work.

P.S. Proving that I’m a hypocrite and/or a glutton for punishment, I have already bought the sequel, which deals with Tiffany, a foster child who lived with Cat’s family for a time and is a friend of Cat’s (she appears briefly in You Make Me). I was drawn in by the excerpt at the end of the first book, in spite of the fact that it sounds like this one could be even more problematic. It pairs 20-year-old Tiffany (who in You Make Me is 17 and apparently looks much younger) with a 30-year-old playboy millionaire who is apparently still married (I think?) to his evil estranged wife. This sounds more like a Harlequin Presents than a New Adult novel, and I have no idea why I want to read it, but I do.