I’ve been meaning to read this book since forever. Wuthering Heights may not be the first Gothic novel, but it’s definitely one of the most famous. From what I knew of the book, I always assumed that I would like it a lot – what’s not to like about a brooding hero, doomed love, and copious helpings of sturm und drang?

I’m wondering if I waited too late to read this book, though. The fact is, I’m not the same reader I was fifteen years ago, or even ten years ago. Oh sure, I still love angst, but I have little patience with characters who suffer endlessly for no good reason. Okay, maybe Heathcliff has some reasons for being angry and bitter, but still, he goes way (way) overboard. Cathy, on the other hand, is just a nasty brat.

But I’m getting ahead of myself… 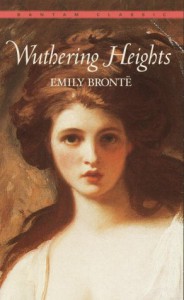 Wuthering Heights begins with a framing story: a Mr. Lockwood has rented a home called Thrushcross Grange in a remote area of Yorkshire, amidst many storm-tossed, evocative moors. He pays a visit to Heathcliff, his landlord, at Heathcliff’s home, the Wuthering Heights of the title. Lockwood considers himself to be a bit anti-social, but he is nonetheless put off by the odd, abrupt and rough manners of the residents of Wuthering Heights. Heathcliff is rude, angry and sarcastic, Heathcliff’s young widowed daughter-in-law is similarly ill-mannered and unwelcoming, and then there is a mostly silent young man who is not clearly identifiable as either family or servant. Lockwood ends up forced to stay the night among this unhospitable company when the weather turns particularly bad, and he finds himself dreaming (or is he?) of a ghost trying to get in the window of his room. She identifies herself as Catherine Linton and begs to be let in, claiming to have been lost on the moor. The name Catherine Linton is significant, maybe, in that Lockwood is aware from writings that he’d found in the bedroom before he went to sleep that the room had once been inhabited by a Catherine Earnshaw.

When Lockwood returns to Thrushcross Grange the next day, he gets the story of the Earnshaws and Heathcliff from his housekeeper, Ellen, who just so happens to have once worked at Wuthering Heights. At the time that story begins, the family consists of Mr. and Mrs. Earnshaw and their children Hindley and Catherine. Mr. Earnshaw returns from a trip with a wild “gypsy-looking” boy he found on a street corner; he christens the child Heathcliff, and sets him up as his favorite, above his two biological children. A lot of suffering could have been averted if he’d just gotten a cat, instead.

I think I’ll just try to summarize the rest of the plot in a paragraph; it’ll be spoilery so skip it if you’ve been planning on reading Wuthering Heights for the past 150 years and just haven’t gotten around to it. (Apologies for the forthcoming copious use of the word “asshole” – I assure you it’s necessary.)

So, Heathcliff and Cathy become fast friends; Hindley hates Heathcliff. When Earnshaw dies, Hindley sees his chance to revenge himself on his rival by forcing him to be a servant. La, la, la – Heathcliff and Cathy still have each other, so they are happy, roaming the moors and behaving like little heathens. On one of their jaunts, Cathy is injured and ends up convalescing at Thrushcross Grange, the home of the rather more civilized Linton family. Cathy subsequently acquires Airs. Heathcliff broods. Cathy is bitchy. Heathcliff goes away and Cathy marries the son of the Linton family, who has an advantage over Heathcliff in that he’s not psychotic. Heathcliff comes back and is mad; he broods some more and then seduces Isabella, Linton’s sister, because he’s an asshole. Cathy has some sort of fit and then abruptedly gives birth to a daughter (also called Catherine; oh, that’s not going to be confusing later!). I hadn’t even realized she was pregnant. Damn impenetrable 19th century writing! Anyway, Heathcliff and Cathy loooove each other, because they are both assholes and how anyone else can stand either of them, I’m sure I don’t know. But Cathy is dying! Why? How? I don’t know. I guess it’s the baby. Anyway, Cathy dies. Heathcliff broods. Linton is sad, too, but he manages not to be an asshole about it. Oh, while all this is going on, Hindley has married, had a son – Hareton – been widowed and become dissolute. Heathcliff has gained revenge on Hindley by winning Wuthering Heights in a game of poker or Go Fish or something, and when he’s not brooding over that dead asshole Cathy, he is tormenting Hindley, or tormenting poor Isabella, or trying to shape Hareton into Heathcliff 2: Electric Boogaloo, because Heathcliff is all revenge, all the time, when he’s not about the brooding. So then Isabella is finally like, I’m out of here, and goes to live somewhere else and has Heathcliff’s son (my suggestion: kill it with fire; seriously, he ends up almost as much of an asshole as his dad, and 100 times whinier. Though on the plus side, not as brooding). Then Isabella dies. So we have widower Mr. Linton living with his daughter Cathy at Thrushcross Grange and widower Heathcliff living with his mini-me at Wuthering Heights, brooding and being an asshole and plotting Terrible Things. Then Isabella and Heathcliff’s son Linton comes to live at Wuthering Heights. (Linton? Linton! Are you just toying with me, Bronte? Do you realize how hard it is to keep these people straight as it is?)

Okay, never mind the one-paragraph thing. That was getting too way too dense. I’m going to try for even more brevity: Linton is a sniveling whiny asshole. Heathcliff is terribly abusive to him. Heathcliff manipulates Linton and Cathy 2.0 into getting together, and then forces them to marry – his aim being getting his hands on Thrushcross Grange. Linton conveniently dies (the body count in this book is starting to resemble that of a Shakespeare play, though with more natural deaths, I guess). Cathy 2.0 hates Heathcliff. Heathcliff doesn’t care. Cathy 2.0 torments Hareton in much the way that Cathy the Original tormented Heathcliff; this is gonna end well (spoiler within a spoiler!: it actually does! This book is INSANE!).

Heathcliff comes to learn a Very Important Lesson, about how revenge is wrong and all. I mean, I guess. He kind of repents before he, too, goes to that Great Moor in the Sky. But it’s a little too little, a little too late, IMO. I mean, he was crazy and sadistic and did I mention CRAZY for the great majority of the book (I don’t think I even mentioned him digging up Cathy 1.0’s corpse at one point…), so really, just being rid of him is its own reward. The bonus is with all of the horrible people of Wuthering Heights now dead (except for Joseph, the creepy caretaker, but no one seems to pay much attention to him), Cathy 2.0 and Hareton aka Heathcliff 2.0 are able to live more or less happily ever after (I KNOW! WTF, right?). Though I still find myself hoping they don’t reproduce.

I have no idea how to grade this clusterfuck of a classic. There were points where I was all “F, baby”, but it’s really not an F book or even a D book; it’s definitely not a C book (I associate a C grade too strongly with “average”, and Wuthering Heights is anything but average). I think I will give it a B-, but that grade does not fully reflect how utterly confused my feelings about this book are.

In summary, Charlotte was obviously the more normal Bronte sister. I’m not sure I even want to try Agnes Grey, at this point. Though I can’t imagine Anne was any loopier than Emily.

This book is in the public domain and is freely downloable at sites like Project Gutenberg.