REVIEW: Cover Him with Darkness by Janine Ashbless 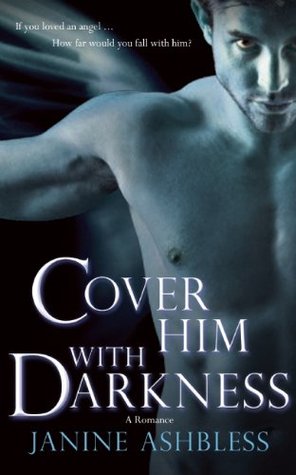 This was a provocative dark romance with quite a bit of suspense. The PNR aspect read fresh to me even though I was familiar with the “fallen angel punished for sleeping with human women” storyline. It’s told from the heroine’s point of view. Her father has raised her in a remote village in Serbia and her family’s mission is watch over a captive chained to a hidden rock inside a mountain accessible only to her family.

She first sees him as a young girl and is moved by the sight of his body lashed to a rock, fed and watered only by her father’s hand. As she grows older, she falls in love with him and that is her doom. Or at least that’s the question posed by the book. Is the man in the mountain punished by the heavens demon or angel?

It’s a provocative book and through most of it, in true gothic fashion, I’m not certain what will be the end result. In some ways, even though I was reading a romance, I felt refreshed by that.

It was sexy but not in the overt, hammer over the head way. The sex scenes all said something about her, about him, and about the plot. I found some of the prose to be quite beautiful.

Rapt with my pleasure, Azazel watched as I twisted and gasped and shuddered beneath him. His lips moved in silent echo of my cries.

But when the last tremors rippled through me and died away, he forgot mercy. He didn’t give me time to recover. He ran his hands over my slick and shuddering body and lodged one on my hip for a good grip. Then his weight came down over me like the slow press of a mountain on the spaces beneath the earth.

I lifted my knees and wrapped my legs tight about him as he began to thrust. Every stroke was an earthquake. He beat the breath from my lungs. His hair hung in my eyes, and the surge of his breath was a growl in my ear. I couldn’t see his face anymore, but my blurred gaze took in the faces above me and over his shoulders: the sad eyes and the glimmering halos and the hands raised in blessing.

The set up in this book is that everyone is bad and you are left wondering if Azazel truly loves Milja or is in love with love itself. I liked that it presented these questions even within the frame of a romance novel but the ambiguous ending, the words of love that are said, might not be satisfying for some.

Each person makes bad choices in this book. Azazel was forbidden from copulating with humans but he defies the higher being and not only fornicates with humans but begets children. He introduces the mysteries of metal and machinery which some say leads to destructive war machines. Azazel disclaims all responsibility for how humans have used the knowledge he and his fellow angels have given.

He also presents the case that his greatest sin was to love and he was endlessly punished for it. The text doesn’t provide a good rebuttal to Azazel–why they shouldn’t join with humans–which I think it should have done.

The other draw back to the story is Milja who is often doing dangerous things, trusting the wrong people, and having to be rescued. I would have liked to have seen her have more agency but the confusion she presented was understandable. When faced corporeal evidence that challenges your faith, poor decision making is likely common.

It could be that the story resonated strongly with me because I’ve had my own dilemmas with faith. One of the reasons I liked the Last Hour of Gann was because it explored both sides of the coin–belief in a higher power and belief in the rational. The question of faith in this book is what is good and what is bad and by extension who is good and who is bad. I liked being challenged within the confines of the romance trope. B