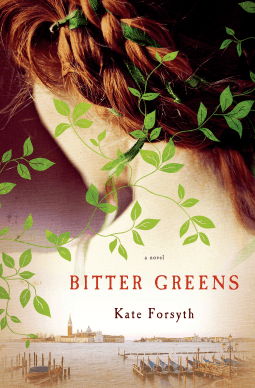 This book has a rape scene.

The amazing power and truth of the Rapunzel fairy tale comes alive for the first time in this breathtaking tale of desire, black magic and the redemptive power of love

French novelist Charlotte-Rose de la Force has been banished from the court of Versailles by the Sun King, Louis XIV, after a series of scandalous love affairs. At the convent, she is comforted by an old nun, Sœur Seraphina, who tells her the tale of a young girl who, a hundred years earlier, is sold by her parents for a handful of bitter greens…

After Margherita’s father steals parsley from the walled garden of the courtesan Selena Leonelli, he is threatened with having both hands cut off, unless he and his wife relinquish their precious little girl. Selena is the famous red-haired muse of the artist Tiziano, first painted by him in 1512 and still inspiring him at the time of his death. She is at the center of Renaissance life in Venice, a world of beauty and danger, seduction and betrayal, love and superstition.

Locked away in a tower, Margherita sings in the hope that someone will hear her. One day, a young man does.

It’s rare that I read a romance book these days that I don’t already have some idea of how the plot will play out. Sometimes I can predict exactly what will happen when and it’s these books that usually almost put me to sleep. So when I come across a book which surprises me as well as delights me with its originality, I get excited. This is such a book even if maybe, technically it isn’t all a romance.

After a bit of backstory, I was expecting the book to quickly jump to the Rapunzel story, as after all that’s what the book is about, right? But no. Instead an amazing start details how Charlotte-Rose gets sent away to a convent. I felt like I was along for her self pitying leave taking of the glory that was the court of the Sun King at Versailles, the bumpy and cold trip to the even colder and bleaker convent as well as the meeting with the sadistic Soeur in charge of postulants. Before I knew it, I was totally wrapped up in the shock Charlotte-Rose feels about this alien world and the women who inhabit it.

It’s a fascinating opening and I found myself learning new things that are effortlessly added to the narrative. Plus they are things that need to be there or have a use rather than just as a show off of research done. I wasn’t in any hurry for Fairy Tale to begin because Charlotte-Rose is so interesting and fun to read about. She’s certainly not an easy person to like at times but I was pulling and rooting for her nonetheless.

Once the kinder Soeur Seraphina begins to tell her fairy tale, I got lost in that world as well. I can see it, touch it, sense it. As with the first section, I was floating along in a happy reading daze as the story unfolded around me. I’d read and read and eventually come up for air to discover that pages had flown by and hours sped past. Seraphina takes the story far past what I grew up hearing and reading by adding backstories, shading in details and giving the whole a glorious color and life.

In the Brothers Grimm version I read as a child, poor Rapunzel’s day to day existence locked up in the tower is skimmed over. Here we see how horrifying, lonely and boring it was. I like the fact that Margherita uses her brains to stay sane and does have agency. She’s told there’s no escape but she tests that to the limit. She makes nice when she has to but never forgets her three truths.

My parents loved me.

One day, I will escape.

But wait, there’s more. We even get the Bella Strega’s point of view and if anyone deserved to get her revenge while learning the arts of herbs and scorcery it’s Selena. She’s tough to begin with and, after what happens to her mother, gets even more hardened early on in her life. I can feel sympathy for what she endured but it is hard to feel sorry for her given what she does to others who had nothing to do with her mother’s fate. However she did come by her mindset of “me first and I must stay beautiful” honestly though.

As I continued to read the book, it was clear that an overriding theme for all the women is that historically, women were at the mercy of men. The witch who taught Selena said it right – a woman could be a nun, a wife or a whore. And the actor who first broke Charlotte-Rose’s heart imparted a secondary truth – a woman needs to be pretty or rich or preferably both to prosper in their world. These realities of the times serve as the impetus for the women’s actions.

It’s also easy to see the parallel between the story within a story in that Charlotte-Rose suffers some of Margherita’s fate – both are locked away, far from loved ones and places at the whim of another. Both have to rely on themselves and both manage to shape their fates as much as it was possible for women to do.

The story was unique and engaging, informative without being a history lesson. I had no idea what would happen next and I can’t tell you how much this thrilled me. The flashbacks opened the beauty and decay of the city of Venice, the glittering world of Versailles and the horror of the revocation of the Edict of Nantes. In writing the book you truly were enjoying a world Charlotte-Rose could only dream of and in reading it I had a wonderful time. B+