REVIEW: Two Nights with His Bride by Kat Latham

JayneB- Reviewsactress / Contemporary / friends-to-lovers / MontanaComments Off on REVIEW: Two Nights with His Bride by Kat Latham 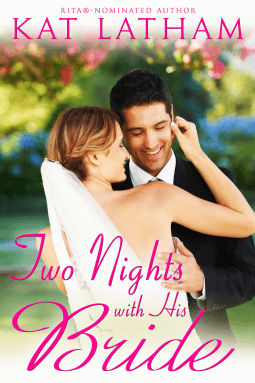 Wedding fever has hit the little town of Marietta…

Soap opera star Nancy Parsons is madly in love with Hollywood’s favorite leading man, and they’re getting married on her parents’ stunning horse ranch just outside Marietta, Montana. Actors, athletes, and politicians will be there to watch Hollywood’s most extravagant couple say I do.

There’s just one problem. The bride’s childhood friend Wyatt Wilder knows Nancy’s making the biggest mistake of her life. Sure, Jared’s got looks, money, fame, and—it seems—Nancy’s heart. But when her bridesmaids hire him to lead them on a girls’-only adventure, Wyatt has two nights in the wilderness along the Yellowstone River to show her what a real man looks and acts like. A rugged, tough, loving man.

But will he be able to do it before she says “I do” to the wrong man?

When I saw this listed through netgalley and realized it’s part of the Marietta, Montana series, I jumped on the chance to read it. I was delighted to read the story for one of Mila’s and Gabriel’s stepbrothers. Oh and the chapter headers – they’re hysterical.

We start the story learning that Nancy and Wyatt have a long and not harmonious relationship. Add a bridal shower plus one bunny outfit and the 48 hour bachelorette party in the wilderness is looking like a disaster in the making. Bridesmaidzillas are generally always a guarantee of Romance book mania but I was happy when this story didn’t descend into the usual “chick-lit disaster before the wedding” book.

Nancy has a history in the town of poverty and low self esteem though she now has money to spare due to her Hollywood success. Wyatt quickly begins to think Nancy’s fiance is weird when he discovers the man wanted to crash the women’s party. When Jared actually shows up, Wyatt knows the man is “off.” As Nancy fights off her attraction for Wyatt, Wyatt has to fight off two Bridesmaidzillas looking at him like he’s raw meat and they’re Rottweilers.

Of course Nancy’s thoughts soon give up the game about how she and Jared interact and get along. Not. Though Nancy won’t admit it yet. Crazy Hollywood people. Her rational brain argues with her rationalization of Jared’s actions and jealousy. As the rafting continues, Wyatt finds himself surprised by the actresses whom he thought would be stuck-up divas which was a nice surprise to me too.

I have to admit that if I were forced to go camping – and I’d do a lot to get out of it, believe me – the comforts provided by Wyatt and his staff might just be enough for me to say it didn’t suck. Wyatt also makes the move to get some of their past issues – well, one major one – talked about and unfestered. He’s honorable enough to initially shy away from making any moves on an engaged woman and think well of Nancy for not wanting to engage in any behavior that might seem like cheating.

Lots of history is slowly revealed, including fact that Wyatt has strong thoughts on how women should be properly treated. It’s not surprising that Nancy crushed on Wyatt as a teenager but fortunately for her, he was honorable enough to not be interested in someone 6 years his junior. Too bad he didn’t convey that information in a more tactful way. Now Nancy is transported back to her youthful feelings of needing and searching for acceptance from anyone who’d give it. Wyatt has his own issues from childhood which didn’t make growing up easy.

Wyatt is honest with Nancy as few others are. He’s seen her at her worst and didn’t think less of her despite her horrific choice in men. All this ties back to Nancy’s feelings of inferiority from childhood. Still I – and lots of others – were baffled as to why Nancy puts up with Jared as long as she does. Finally some million $ rock solid reasons for why she won’t pull the plug are revealed.

Wyatt doesn’t give up on Nancy and provides the romantic escape. But then what? How is Nancy going to shoulder her burden and carry off the day? Wyatt just slays me with how he’s always taken care of Nancy – even when she was a little child. But now she doesn’t want someone to do that, she wants to do this herself and he’s thinking she’s been strong and doing it all along.

Still, I am baffled at how Nancy – who had a terrific dad her whole life as an example of how a good man acts – keeps falling for turds even with her self esteem issues from poverty.

I do admire how Nancy pulls herself together and makes the decision to take her power back the best way – through being the best at what she does. She doesn’t let anyone hold her down or keep her back but triumphs – publicly. I also like that even though Wyatt does work a business deal – that really helps more people than just Nancy – he backs down some and lets her be in charge of looking after herself. Well, okay, he’ll open jars for her if they’re stuck but he doesn’t try and solve all her problems as if she’s too weak to do so.

Final thoughts? I like both these people. I don’t understand some of Nancy’s choices in men, especially since she’s not totally isolated from her friends and family who have been waving huge red flags at her about Jared and the fact that her parents have such a strong marriage as an example for her. Wyatt is easier to fathom and his actions make more sense to me. Their relationship is fine and dandy, IMO. But Nancy … hmmm. She makes me give this one a B-