REVIEW: One Night with Her Bachelor by Kat Latham 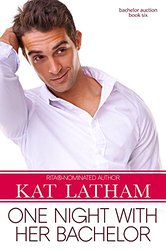 Bid on a date with this wounded warrior for an unforgettable night of adventure. Aim high—and bid higher!—because no one comes close to local hero Gabriel Morales.

Molly Dekker hates being the town charity case, but when her son Josh is seriously injured she has no choice. She lets her best friend organize a bachelor auction to help pay her massive bills and make Josh’s life more comfortable. She can’t bid on any of the men, but a surprise bidder gives her a gift she never expected: a date with the man who saved her son’s life—the only one she’s in danger of losing her heart to.

Former Air Force pararescueman Gabriel Morales made a career of flying to the rescue, until a tragic helicopter crash stole more than his livelihood. Being auctioned off like a slab of beef isn’t in his recovery plan. But one look, one touch and one night unlocking Molly’s pent-up passion make him realize how badly he needs to be rescued…and how badly he wants to rescue Molly right back.

Will Molly and Gabriel’s never-quit attitude have them rushing head-first into love? Or will Gabriel’s secret pain stall their relationship before it can get off the ground?

After reading and liking so many of your London Legends rugby books, I was intrigued to discover this one is set in the US with nary a rugby player in sight. Well alright, I thought, let’s see how this one is.

Molly is that dreaded word that modern woman wince at being called – nice. She’s grown up in a small Montana town and now teaches young children – how much more of a hot date vibe killer could it get? She does finally gather her courage, after a semi-smoldering exchanged look in the grocery store over spilled staples with the man she’s always dreamed about, and try to make sparks happen. I give her lots of points for that.

Gabriel is – let’s be honest – a former military cliché. The wounded, withdrawn hero with Issues he’s not finished dealing with yet. But he seems more realistic to me because of one thing – he’s taken up woodworking and frankly he’s not that good at it. No perfectly finished pieces that allow him to work out the angst in his life from him, nooooo, his are on the wobbly side. Just when he’s gotten over his shock and is ready to see if Molly and he have chemistry, a disaster strikes and, as horrible as the fact is, he gets to feel needed and complete again.

Over the course of the book, I was loving Molly’s firecracker friend Lila and want to see more of her. Perhaps with the Jarhead? The scenes with her character make me think I’ve missed some intro story to a series. Perhaps not and these are only nuggets designed to interest me in a possible story. If so, it worked.

Josh is obviously there to move Molly and Gabriel’s relationship forward by serving to initially bring them together and then back together but he’s more than a plot moppet. Within the confines of a novella, he seems a developed person. And while Molly’s character changes as she worries and works to help him through his new reality, she’s a mother and I would expect this. I enjoyed Molly and Josh’s teasing and good relationship. Molly’s so happy when all she has to worry about is normal teenage attitude. I appreciate that he’s a normal boy, with normal boy wants – friends, normality and sleepovers. He’s not made into a noble, suffering martyr.

The story avoids parts of the “brother’s best friend trope” in that Gabriel admits to Molly that until he saw her grown up, he’d never once fantasized about her. He did remember how important teaching was to her by relating a childhood incident he still retold. But her painfully awkward seduction technique works on him in ways he’d never imagined. I hate to say but lumbersexual – hmmm, not an image that works for me.

Molly has to overcome her issues with asking for assistance which helps Gabriel because a) he just wants to make things easier for her and b) she can now bully him about how everyone needs to at times and has to be strong enough to ask for it. The auction is hilarious and Gabriel’s 2nd grade teacher’s excitement is even funnier. But when Gabriel gets bought for Molly by her son – that’s priceless. I didn’t think it could get funnier but the story of where Josh was actually born takes the cake.

Molly and Gabriel both want their lives back as they were, and Molly wants Josh’s could-have-been life back for him, and all have to learn to deal with the hand of fate. Josh actually does the best of all and even he gets sulky about school. Gabriel does try on the angsty, wounded soul persona for a while. Then he finally starts reminding himself that he’s alive and others aren’t. Molly and his mother help bring him around – Molly because he wants to make her smile and he’s not a quitter and his mother because he admits to her first that Molly is someone special. If a man tells his mother that, then it must be true.

Once again, it’s Molly with the courage to keep talking to Gabriel, keep trying to get to the bottom of what’s holding him back from a relationship. In doing that, she gets the courage to face her own life and begin to do things for herself instead of pushing her needs away.

It’s funny at times, wrenching at others. I’m probably not a fair judge of the issues facing either Gabriel or Josh but at least Gabriel doesn’t serve only as an instrument to change Molly – well, maybe a little but not totally. He changes a lot for her. The story ends on a hopeful note with the possibility of HEA but it doesn’t feel rushed. B