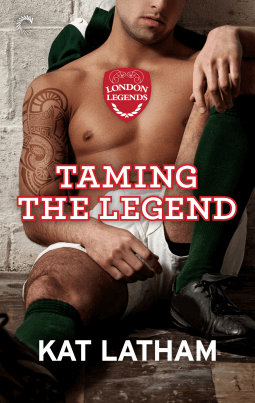 When retiring rugby star Ash Trenton considered his next career move, coaching troubled teens at his ex-girlfriend’s California camp wasn’t on the list. But when Camila Morales reappears after eighteen years, begging for his help, he can’t say no to his first and only love.

Camila was just sixteen when Ash moved on to start his rugby career, leaving her heartbroken…and on her own to make a life-changing decision. Now she needs his help to win a tournament prize and save her camp. Relying on Ash is the last thing she wants. But while it’s hard to get over being dumped for a sport, it’s even harder to ignore the rush of attraction that has only gotten stronger after so many years apart.

Coaching teens is the hardest job Ash has ever had, and the task becomes personal when he begins to fall for Camila all over again. But when he is offered his dream job, will he choose the job—or the woman whose heart he already sacrificed once?

I’d already requested this from Netgalley based on it being part of the London Legends series before being clued in on the fact that it would be the story for the sister of the hero in “One Night with Her Bachelor.” Twofer! Booyah for using individualized correct slang for each character based on nationality. That couldn’t have been easy to edit.

It begins with a cute recap of main characters of the other “Legends” books. In a few short lines we see everyone’s happy and that Ash is beginning to wonder at the wisdom of focusing totally on his career instead of any kind of outside relationship. True he’s reached the pinnacle but seeing his settled teammates with their families makes him think about the fact that he’s celebrating alone. Well, that’s all about to change.

His retirement is the chance for some major p*ss taking of Ash by said team mates as only the British can do. Yet even this gets upstaged when Mila Morales steps back into his life. Their remeet is not cute. Not at all but definitely memorable for all present. And Mila does have a reason for it as we begin to see from the flashback to their initial meet. Now that was cute.

When Ash discovers what actually happened after he and Mila parted, he’s gobsmacked. Now he can’t just say no to Mila’s proposal as he had planned. Their response to the truth of her letters is measured and mature. Lots could have changed, Ash thinks. He and she were young then and teenage feelings are not exactly rock solid for many. Plus their long held feelings about the way it ended have now been upended which takes a lot to wrap individual minds around. The truth will open a new and intense conflict as the knowledge of what he missed and what that cost several people in his life dawns on him. He takes it slow, as does she, which is all good by me.

It soon becomes clear that they’ve had vastly different life experiences since The Meeting. He’s seen the (rugby) world and held it the palm of his hand while she’s been battling alcoholism. Or I thought she had despite these hints getting sidelined as the book went on. What hasn’t changed is that Mila is ready, willing and able to be sarcastic – something he once liked – and bring him down a size or three.

These two are brutally honest with each other and thus the opening part of the book zips past the Big Misunderstanding I’m used to seeing utilized to slowly drag out the suspense of major plot points. The crashing conflict and years of incorrect assumptions about the other are what might have actually saved a possible relationship – as Ash more or less tells Mila when he knows the full truth. He’s not sure if he would have been able to give her the time then that a marriage would have needed to work.

Ash does realize that given his past behavior, he probably would have obsessed about her and not given his all to rugby but also not to her either as time wore on. He’s furious at what happened but, he knows deep down, why it was done.

They remember a lot about each other from then but need to learn about who the other is now. I enjoyed the little reveals of how much they initially meant to each other (Ash’s tattoo in particular), thought about each other and hints of where this might have led if things were different. The “less than wonderful” revelations of pain endured hit like a crosscut.

Still, it’s refreshing that they’re acting like adults here and not sulky school brats. They flirt so sweetly and humorously – deadpan-ish with snappy comebacks. I’m dying with laughter at Ash’s unintentional lessons to his camp team in British slang and how to play Rugby. Ash has totally got over his initial shame at not considering girls as his team and is now treating them as his team with horrific verbal results which are about to make Mila’s head explode. Still her glare can wither him. And her brothers’ comment about him could be used by his old mates to give him grief.

Double bonus points for Ash being so freakin’ sensitive about her feelings – making it clear how much he respects her inside of bed and out, unlike other men in her past. Her comments give him insight into how the other men in her life have acted towards her and it breaks his heart. His momma raised him right. I do love his mum. With him it’s not just sex. It’s from the heart, always was and always will be. Even when Mila doesn’t want it to be in order to protect her heart cause she knows this can lead nowhere over the summer. Only she quickly realizes that it’s already too late.

Ash also soon acknowledges that he wants more. He wants what they missed out on for the past 18 years. He wants a relationship, he wants public displays of affection, he wants people to know they’re a couple, and to wake up beside her every morning. Yeah, at times Ash comes across as almost too good now but he’s a nice and refreshing change from asshat heroes who seem to overpopulate romance novels. I enjoyed seeing Mila and Gabriel take loving sibling potshots at each other.

I sussed out one of the major surprises which probably won’t be much of a surprise to most. Still I’ll try to be oblique about it. Mila gets hit with two major self esteem issues which will make her feel she’s still not good enough. One is because she bought into a common relationship myth and the other is her belief that once again Ash is going to leave her because of Rugby. Then she finds a way to feel good enough, be good enough in her own eyes. Her camp is for troubled children and now, she’s more experienced than she was herself at 17. She can help.

How’s it going to end? How are Ash and Mila going to end up on the same continent? What will happen to the camp? Their family? I was on pins and needles as the end got nearer. But, but … then comes evidence of character growth. Mila’s gained some confidence in herself and what she’s worth over the years. But the conflict! It’s real and intense and seemingly unsolvable in a way for everyone to be happy and together. In my notes I typed “The suspense is killing me!” Okay, I sorta guessed some of it but the marriage proposal wins for major cute and wonderfulness. The way the camp is saved is crazy awesome.

I’ve been waiting for a book I’d click with as well as I did Spencer’s and I got it. Good things do come to those who wait. Ash and Mila are lovely, sexy, mistake making adults. The way their remeeting begins, I dreaded learning how they had met and parted – obviously on bad terms over something major. Then I waited for the major issues to be slowly and agonizingly dragged out past several good opportunities for these two to be honest with each other. Then I waited for snits and sulks over the summer. Amazingly, none of this happened. None of the usual romance tricks and tools to increase suspense. I got two people who were in love but are smart enough to know they’ve changed over the years and that they must relearn each other. They also know the conflicts that will separate them again if both get their heart’s desire. Then you throw another load of coal on the flames with something I suspected but didn’t know how it would be dealt with. I was riveted to the book to see how it would all work out. Happily surprised that you made it all work. And one of them did get shortchanged years ago so my hunch about today’s ending was right too. This is the age of cell phones, skype, and cheaper air travel so it can all bring people together. I’ll be honest and admit I was wiping away happy tears at the end and have my fingers crossed over who will be the next Legends hero.

Now I must look up ALL the words for the rugby song the girls sing on the bus. A-