REVIEW: An Appetite for Violets by Martine Bailey 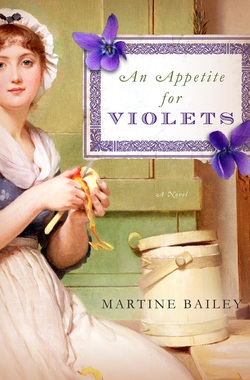 “That’s how it is for us servants. No one pays you much heed; mostly you’re invisible as furniture. Yet you overhear a conversation here, and add a little gossip there. Then you find something, something you should not have found.”

Irrepressible Biddy Leigh, under-cook at forbidding Mawton Hall, only wants to marry her childhood sweetheart and set up her own tavern. But when her elderly master marries young Lady Carinna, Biddy is unwittingly swept up in a world of scheming, secrets, and lies. Forced to accompany her new mistress to Italy, she documents her adventures and culinary discoveries in an old household book of recipes, The Cook’s Jewel. Biddy grows intrigued by her fellow travelers, but her secretive and unconventional mistress is the most intriguing of all.

In London, Biddy finds herself attracted to her mistress’s younger brother. In France, she discovers her mistress’s dark secret. At last in Italy, Biddy becomes embroiled in a murderous conspiracy, knowing the secrets she holds could be a key to a better life, or her downfall.

Is “servant fic” the newest historical thing? In 2013, I enjoyed seeing Jane Austen’s world from the view point of the lower classes working themselves to chilblains and exhaustion to keep the Bennetts looking smart and now your first novel tells the story of an undercook whose life gets turned upside down by the machinations of her “betters” yet who manages to not only survive it but come out ahead of the game. But while I enjoyed parts of the journey, the last bit turned a touch melodramatic while I looked for closure on one character and didn’t get it.

Biddy Leigh’s life is all planned out, or so she thinks. Not for her a spinster existence as eventual successor to her mentor Mrs. Garland as head cook. Secretly engaged to handsome stable hand Jem, she doesn’t plan on remaining at Mawton Hall past the announcement of their pending marriage. But the Quality, in the person of her master’s new young bride, has other plans for her and willy nilly Biddy finds herself packing for a road trip.

Biddy has a talent for cookery which is something she might be able to turn to her advantage and in more ways than just marrying a stableman and setting up a tavern. It’s Mrs. Garland who puts the idea in Biddy’s “reluctant and determined to be in a snit” mind. This might be the chance of a lifetime for her as there are wealthy and titled folks willing to pay a fortune for a cook who can prepare French meals.

The journey starts with Biddy, Lady Carinna’s foreign footman and snearing lady’s maid plus the steward of Mawton Hall all jouncing along the horrid, muddy English roads along with their mistress. The story is from the servants’ POV and reader sympathy is supposed to be slanted towards them. The gentry are nothing but bothersome and trouble.

Biddy definitely sees the world as a cook would. She minutely questions everyone for new receipts and to her the sea looks like an endlessly simmering pot. Just the smell of the kitchen, even before she’s laid eyes on it, tells her the state of it and the cook who works there. Biddy actually thrills at the chance to cook a Christmas dinner for 50 diners at the home where they stay in Dover. But the workload! It truly would take that many hands to turn out the meal they put on. She even notices the fact that paintings in France picture fruit that would never grow in the same season.

And oh once they get to France and Biddy sees her future in the delicate timing and tasting of the wonderful French food she sees. That’s real cooking. It’s fun watching Biddy’s eyes open to the world – new food, new places, new ways of looking at all social classes and she’s got the glimmer of a future now that she’s talked with the shrewd Parisian restauratrice. It’s the presentation as much as the actual product.

It’s obvious from early on that Carinna has plans for Biddy. The question is, when will Biddy see? Carinna’s sly instruction passes itself off to Biddy as a way to show up snooty Jesmire and as such, glides down easily. It’s also a way for us to see more differences in how the classes view the world – for Biddy Mawton Hall was a prayer’s answer to keep her from the coal fields while to Carinna it’s a moldy, awful place. Dazzled by everything around her, Biddy doesn’t comprehend her danger in time. Even when Biddy begins to have her doubts about making promises and throws out objections to what she thinks is being asked of her, Carinna manages to sooth the way.

Slowly Biddy begins to hear and discover clues as to what Her Ladyship and her brother might be up to. Poor Loveday already knows their past tricks. The feeling is a slow, dawning miasma of treachery and danger though not enough to frighten anyone off, though or the game would be up. The fate Carinna flees from is as old as time as well as a product of the day and also explains Sir Geoffrey’s first wife’s fate.

All the various chickens hatched prior to the last third of the novel came home to roost. Still the book seemed to get bogged down in melodrama. Biddy and her new love coo and bill in dark alley ways, Mr. Pars seems to completely lose his mind and the birth scene is straight out of a horror novel. Everyone gets his just deserts as the novel wallows in blood and gore. Then Biddy gets all sentimental about someone and even she can’t explain why. The coup de grace of WTF is the revelation about Carinna’s baby – which I saw coming but about which I still have to ask, why was this needed if it wasn’t really going to be explained or expounded on? It turned out to be just one more bit of eeww for no purpose.

I was also confused about the character of the footman, Loveday. Why have a character from Batavia? Novelty? I never did get a clear understanding of why his character was included. As a way to show modern readers this life and period? Well, I thought seeing it through Biddy’s eyes was fairly clear. We’re also left with no resolution for him. Did he make it home? I can understand why it would be difficult if not impossible for him to ever send news to Biddy or even if he did for her to get it, though she did get a letter from home showing how things turned out there.

While I enjoyed the characterizations and writing style, as well as watching Biddy’s world open up for her personally as well as professionally, I felt the last third of the book seemed to lose its place. True, the darkness had been looming from early on but everyone seemed to go off the rails sink into soap opera. Biddy and her love find their own slice of culinary heaven and seem born for foodie greatness but not all the character threads were tied up. The evil and the hoity toity get what is coming to them but poor Loveday, who garnered my sympathy from early days, gets cut loose and set adrift with no resolution. Yeah, it probably does reflect the realities of communication then but I still felt cheated. B-/C+