REVIEW: Risking It All by Tessa Bailey

JaneC+ ReviewsContemporary romanceComments Off on REVIEW: Risking It All by Tessa Bailey 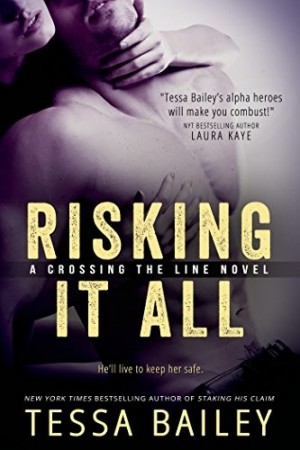 This is one of the books where I wish I didn’t have to assign a grade. Part of the book I really enjoyed and other parts, not so much.

Bowen Driscol has inherited the territory of Southern Brooklyn from his recently deceased father. He is taken in and vaguely threatened with stuff that doesn’t make sense in order to get him to flip on Trevor Hogan, a criminal that runs the north Brooklyn gangs.

Sera seduces Bowen and attempts to manipulate him through sex and then is disappointed when it doesn’t work. She was supposed to be undercover but she wasn’t authorized to be undercover. Instead she took a week of leave and tried to inveigle herself into Hogan’s organization. She has more than one opportunity to achieve her goal but doesn’t take them. What was she waiting for? How did she think she was going to escape with the evidence? Moreover, how would the evidence–possibly stolen–be used to prosecute this guy?

I wished these questions were addressed in the body of the book. Further, maybe if someone (like her Uncle who had orchestrated Bowen deal) had told Sera that Hogan was under investigation rather than keeping it from her, she would have been removed from danger.

Bowen is a reluctant leader of South Brooklyn’s criminal endeavors. But why he didn’t just walk away from it didn’t make sense. His sister was dating a cop and removed from potential threats so there wasn’t any need for Bowen to stay in a position that he despised.

In sum, the plot and character motivations made my head hurt.

But, as individuals, the romance worked for me. Bowen’s desire for something better for those he loved and even for himself was believable. Sera as the naive ingenue who wanted to avenge her brother and then save Bowen was a good fit for him. The duality of his character–wherein he struggled against his violent tendencies and wanting to be good enough for Sera–was intriguing enough to keep me reading in spite of the plot.

The love scenes were delicious and the two leads fit. They had great chemistry and it was easy to see why the two fell for each other.   One review said Bowen is the dirtiest talker of the Bailey books yet and she may be right. Further, the language used came off as genuine, the type of thing a person like Bowen would say, and not artificially inserted for the purposes of making the scene appear sexy.

While the book was plot heavy, the plot was the least favorite part of the story whereas the romance and individual characters were the best part. It was one of Bailey’s more emotional books and Bowen, in particular, stood out vibrantly against the pages. C+