REVIEW: Assimilation, Love and Other Human Oddities by Lyn Gala 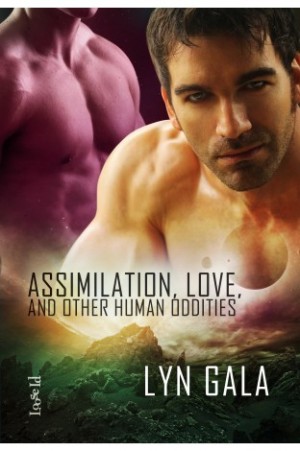 Ondry and Liam have settled into a good life, but their trading is still tied up with humans, and humans are always messy. When political changes at the human base lead Ondry to attempt a difficult trade, the pair finds themselves entangled in human affairs. Liam wants to help the people he left and the worlds being torn apart. He also wants to serve Ondry with not only the pleasures of the nest but also by bringing human profits.

Ondry has no hope of understanding human psychology in general; he only knows that he will hold onto his palteia with the last breath in his body…and he’d like to keep his status and his wealth too. Unfortunately, new humans bring new conflicts and he is not sure how to protect Liam. He does know one thing that humans seem to constantly forget–that the peaceful Rownt are predators, and when their families are threatened, Rownt become deadly killers. Liam is his family, and Ondry will protect him with his last breath… assuming that he can recognize the dangers in time to do so.

I reviewed the first book  in this series here. This book continues to deepen the relationship between Ondry and Liam, and a significant part of it is also devoted to the relationship with a new human trader/first contact specialist in the midst of human civil war. I would say that the main theme in this story is communication. Communication between two lovers from different species is *fascinating* to me. Rownt’s psychology did have some similarities to humans, but A LOT of very significant differences and I did not feel that you wrote a race that just looks different from humans.

It is a lot of fun to read about Ondry trying to understand some major definitions from human psychology – mostly because he wants to understand Liam better, but also because he wants to conduct more profitable trades for himself and community. After reading this book it was clear to me that wealth is not the most important thing for Rownt – status is. Status seems to be a flexible thing and something that can go up and down depending on the conduct of the trader in many areas of his life. Ondry is young (he is not even 200 years old, Rownt seems to have a thousand-year life span, and some grandmothers live even longer), but he already has a Ka status which he guards jealously, because if Grandmothers (even some of them) continuously refuse call him as Ka, apparently his status could be lowered. Apparently finding palteia for himself is something that added more prestige and status for Ondry as well, since so many Rownt want that but fail to find a palteia and become a chilta.

Ondry keeps insisting that Liam is not the same thing as a sexual submissive (I think there are more differences than the similarities, but again opinions may differ). These two cannot have sex the way we understand it anyway – because their sexual organs are not exactly compatible. They do find a way to pleasure each other, but while what Ondry does for Liam may look at least somewhat familiar to you (if you read the m/m books where one partner has tail ), what Liam does for Ondry is not sexual as we understand it at all.

“That elicited a sigh, and Liam shifted, his hot skin pressing against Ondry, “I told you that my people have very little respect for submissives.”
“I still dislike the linguist implications of that world,” Ondry said. If anyone else designated his palteia with a category using the root “sub,” Ondry would be most displeased, and he would likely show that displeasure in rather physical ways. Instinct told Ondry that “palteia” and “submissive” could not be the same. A rational species – and humans had shown every indication of being rational – would not dismiss the value of having one who would serve willingly.”

I guess what I was worried about after book one was the implication that as palteia Liam would have to serve Ondry. I read master/slave stories and have nothing against them, but this series just did not feel like one. Apparently “serving” means conducting trades for Ondry, which is something that brings them both profits – and they both trade anyway, so Liam now works for Ondry. This work seems to be something that he enjoys tremendously and Liam seemed to thrive much more amongst Rownt than he did amongst humans anyway. As I said, they seem to pleasure each other pretty equally, even in a completely different way. Also, Ondry protects Liam from physical threats –fighting is not something that Liam ever enjoyed and I can respect it, not everybody is born to be a soldier. Liam took a linguistic exam because he wanted to escape the horrors of the war in the first place. Basically what I see in this relationship is two beings equally supporting and helping each based on who they are.

The larger communication issue the book explores is Liam and Ondry having up close and personal contact with Susan Diallo – the first contact specialist/trader/military person. I am not sure what to call her, because she can do several things at the same time. I really enjoyed her portrayal – not just because she is a brilliant linguist and brilliant in so many other ways (for example, she understood some complexities in Rownt language after one conversation with Liam). No, what I loved is that at some point Susan screwed up very badly – because of the best intentions but also because of her arrogance. She screwed up so much that Ondry has this desire to kill her, which he has to fight almost till the end of the book and probably in the next book of the series as well. You see, she unintentionally endangered Liam because of her gaffe and Ondry is very unhappy when somebody does that. Very unhappy! Have I mentioned that Rownt are predators and hunters by their basic natures?
Anyway, the author manages to make me still like her, in fact I like her a lot, and I really appreciated that. I could see Susan’s point of view and understand why she made the mistake she did.

At the end of the book Ondry and Liam have a chance to take their trades much further than before and even though the Rownt dislike change (Liam hates change too, maybe that’s another reason he took so much to them), they are both happy and welcome it. I loved the ending and an looking forward to the third book in the series. I think it’s the last one, but of course I can’t be sure.