REVIEW: Wendy of the Wallops: The Wallops Book 2 by Gill McKnight

There are worrying times ahead for Wallops valley community police officer Wendy Goodall. As part of a witness protection task force, she volunteers for the Girl Guides to ensure the safety of Lexi, a young girl in the local village, while sexy Detective Inspector Diya Patel makes her new job a lot easier. Or so she thought.

Where exactly is the father of the young girl she’s keeping an eye on? And where are his former associates, part of a violent gang of human traffickers? Join Wendy as she deals with life as a newly out lesbian and a volunteer for the Girl Guides, led by the quirky and maddening Kiera Minsk, who Wendy is drawn to—but can she trust her? Several things aren’t adding up, and with pressure building to keep Lexi safe, she’s not sure where she can turn.

Oh, I have been waiting for this book ever since I finished “Welcome to the Wallops” four years ago. First it had to be written and then it had to be available in the US in digital format. The wait to get back to the Wallopians was worth it though. Was that enough “W’s” in one sentence?

Wendy Goodall is having a momentous Autumn. First came her self realization that she is a lesbian and second she’s been given a role in a UKPPS (Witness Protection) case. Her supervisor doesn’t appear to be happy that this has been landed on the small police force of High Wallop nor impressed with the flashy London Met DI Diya Patel who arrives to fill Wendy in on what’s going on. When Wendy learns that part of her cover will be to join the local Girl Guides as a volunteer leader, she’s less than thrilled. As a shy youngster, she hated her time in the pony club and much preferred to spend her time reading (Yay – a woman after my own heart). But the decision has been made and the Way Has Been Smoothed so, what can she do?

While meeting with her friends Jane and Renata at a local pub, Wendy encounters a flirty woman in the loo who gives Wendy an eyeful of hot pink bra and knows Wendy’s name. Later on Wendy discovers who the woman is and the role she’ll play in all that follows. Meanwhile, a new officer arrives at the High Wallop police station who is also from London and knows quite a few people now involved in the case. Pete seems like a good guy (and is definitely better than the useless layabouts Wendy works with) but the way Pete is acting  sometimes doesn’t make sense. But then there are a lot of people who Wendy wants to trust but isn’t quite sure of. Can she help keep a young girl safe, survive a camping night with eight enthusiastic girl guides, and find a woman who can kiss while not looking like a muppet?

Yes, we’re back in the small towns of High Wallop and Lesser Wallop where most people know your business, crime is more low key, and the quiz nights at the local pub (owned by Wendy’s parents) are cutthroat. I adored getting to see several old friends – Vicar Jane and her cosmopolitan lover Renata still zing some smart and sassy dialog. Renata is always available for Lesbian Questions, too. The book opens with Wendy following up on police witness statements for the event that took place in the last book which involved marijauna and the congregation to whom Jane was preaching a sermon. During the interviews, Wendy manages to keep a straight face though Pete almost gives the game away when his smothered laughter causes the sofa to shake. 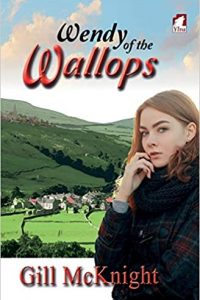 The gang from whom Wendy is attempting to keep Lexi safe is no joke but due to the fact that she hasn’t been given permission to tell some people about the case, a lot of information that would have been useful to her is kept hidden from her. Wendy and I do get a bit frustrated that she can tell some people have not been forthcoming with everything they know but then she is only seeing one side of things and her mind automatically veers into police mode about what she has been told. I do like that she’s hardworking and conscientious. She enjoys her job of community policing though she does fear that she’ll eventually have to leave the Wallop valley in order to advance in her job as well as find romantic interests.

There are several threads winding through the book – Wendy finding her legs as a lesbian, female friendship, Wendy trying to be a Guide Leader, the witness protection case, policing in a small town, some family issues, and the harrassment that LGBTQIA officers can face. This last bit Wendy learns about from Pete who fought valiantly against it in London and is now just looking for a quieter place to live. The people of the Wallops appear to be more accepting and there are several other Queer couples and characters there. I did find it strange that so many things seem to have skipped over Wendy’s radar, yet are public knowledge among her friends and other townspeople, despite the fact that Wendy has lived here most of her life.

The ending is exciting and the reason why some people acted as they did and didn’t tell Wendy everything she wanted to know makes sense when the Big Picture is revealed. Wendy looks as if she’s found someone who could be long term (and who knows how to kiss), while her police actions earn her praise from an unexpected source. There are a few issues left hanging a bit such as who owns Snowy Owl, what will happen when a nice character returns from a charity mission overseas, and the family issue that Wendy’s brother initiates. I hope that this means there will be another trip to the Wallops as I’ve enjoyed my first two visits there. B