REVIEW: Welcome to the Wallops by Gill McKnight

The villages of High Wallop and Lesser Wallop have graced either end of the Wallop valley since medieval times. And competition between the two has never ceased since, especially over the famous Cheese and Beer festival.

As head Judge of Show, Jane Swallow has always struggled to keep peace, friendship, and equanimity within the community she loves, but this year everything is wrong. Her father has just been released from prison and is on his way to Lesser Wallop with the rest of her travelling family and their caravans.

Her job is on the line, and her ex-girlfriend from a million years ago has just moved in next door.

Her life is going down the drain unless she can pull off some sort of miracle.

The cover for this book caught my eye and drew me in to read the blurb. For some reason, I find myself a sucker for English towns with names like these. I mean, who wouldn’t love a little place called Lesser Wallop? But it was the seeming light-hearted description that made me want to read it.

Jane Swallow loves her town too and is determined that rival rector Colin (I couldn’t help but picture him played by Tobias Menzies) – with his perpetual sneer – isn’t going to succeed in snatching away their annual festival. After all, they’ve been having it there for centuries and High Wallop isn’t getting it their hands on it. Jane is deeply involved with the lives and wellbeing of the villagers as well and hates to see the charming cottages once owned by the church being sold off and bought by smart Londoners looking for a weekend home. When the renovation begins on the one next door to her, she watches in dismay.

After a torrential downpour, her dismay turns to fear as the nearby stream overflows and floods that house. Her feelings switch to disbelief when she attempts to check out the damage and comes face to face with the last person she ever wants to see again – her long ago lover with whom she has Bad History. I didn’t let Renata’s initial reaction at seeing Jane put me off as I reasoned she must have a darn good reason for that depth of emotion. Jane and Renata were crazy in love at one time and the gale storm that tosses them back together upends them mentally as well as physically.

This is a lovely book filled with village nosiness, neighborliness, and politics. Think Vicar of Dibley but with a lesbian rector who isn’t out to her parishioners. Jane and Renata were young and stupid in love until the reason for their long ago breakup occurred. It’s an understandable reason on Jane’s part given the way and by whom she was raised though she finally admits to herself as well as Renata that she handled it badly. 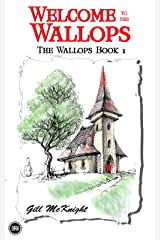 Renata’s gone on to make her fortune off of selling karma self help books then working the lecture circuit only to find karma kicking her in the arse just when she thought she’d finally got back to the lovely valley she fell in love with and in (and we know with whom) all those years ago. Both women quickly discover that the attraction is still there but can they overcome years of misunderstandings as well as Jane’s job that while accepting isn’t joyously welcoming.

The relationship between Jane and Renata has a way to go before they’re back on track and I like that the book allows for that. They parted on bad terms and have to see the changes in each other as well as settling the anger they felt for years before they can move forward. This is one teensy area I felt needed a bit more illumination as Jane’s actions were explained while only a hint was given about why Renata, who’s reformed herself and made amends, did as she did.

I could easily sink into this place. Let me get my visa sorted and I could show up for the quiz night at the pub and be on Jane’s team “God Only Knows.” The charming English gardens call to me while the villagers seem like real people instead of caricatures. Some are nice, some are lazy, some are nosy but they’re not played for cheap laughs. I also loved the gentle humor and clever turns of phrase. While this book ends with the relationship settled, despite Jane’s rescue dog’s penchant for chewing up Renata’s expensive handbags and knickers, there are a few things which I guess will be carried on to the sequel. I’ll be eagerly awaiting my return to the people and place of Lesser Wallop. B