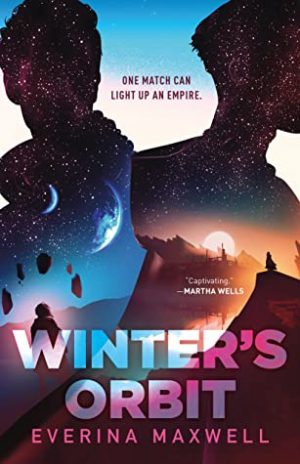 While the Iskat Empire has long dominated the system through treaties and political alliances, several planets, including Thea, have begun to chafe under Iskat’s rule. When tragedy befalls Imperial Prince Taam, his Thean widower, Jainan, is rushed into an arranged marriage with Taam’s cousin, the disreputable Kiem, in a bid to keep the rising hostilities between the two worlds under control.

But when it comes to light that Prince Taam’s death may not have been an accident, and that Jainan himself may be a suspect, the unlikely pair must overcome their misgivings and learn to trust one another as they navigate the perils of the Iskat court, try to solve a murder, and prevent an interplanetary war… all while dealing with their growing feelings for each other.

A good friend recommended your book and I am always happy to try the book she recommends because our tastes usually align so closely. I was so eager that I did not even hesitate to pay 12.99 for the author I never tried before .

Warnings: abuse, mental torture (I really cannot go in more details as to what mental torture is in context of this book without going into serious spoilers territory, but you may want to heed the warning anyway)

This was a book which had all the ingredients that I normally love: Gay romance in the SF setting, with a lot of politics and intrigue in the background, or not really in the background – basically when the romance develops in the context of the main characters having a lot to do besides developing their relationship. It has lovely writing, very appealing main characters and still I spent the first 18 chapters out of 32 chapters of the story mostly wanting to throw this book against the wall. Multiple times. Why you ask? Because it was so agonizingly slow, but not just because it was slow, because I felt that it was slow in the wrong way.

I cannot even adequately explain why it felt slow in the wrong way, but I will try. I think I understand the idea that the author may have wanted the couple that just got thrown in the arranged political marriage to get to know each other and develop feelings for each other before ramping up the action/suspense/adventure – whatever you want to call it storyline. But the execution just felt wrong to me. I guess because the murder of Jainan’s previous spouse was the elephant in the room, such slow development just did not work for me.

Also, there is slow development of a romantic relationship and there is SLOW, marred by constant misreading of the situation between them. I of course saw the tiny sparks couple of time (and I am NOT talking about sexual relationship – I always feel that when I complain about a romance being too slow, I need to clarify that the absence of sex is not what I am complaining about. I’m happy to read the sex scenes when it completes the romance, but it’s certainly not my first interest in romance), but most of the time I felt frustration between the guys because they were reading the situation incorrectly and saying the wrong things. It was understandable giving their past, especially Jainan’s past, but it was not *fun* to read if that makes sense.

Having said that, writing really appealed to me and thus I kept reading and somewhere around the fifty five- sixty percent the book certainly picks up if you can hang in until then, or if slow pace of the first half appealed to you. Somehow the author made me like both guys separately even if I mostly did not care about them being together initially, but when the book ended I was happy for both of them.

Here is Kiem trying to learn something about his new betrothed from his personal assistant Bel, who is indeed just as amazing as she seems and more:

““He has a doctorate in deep-space engineering!” Kiem called to Bel in the study. “At twenty-seven! How the hell am I going to talk to someone with brains like that?” “You have practice with me.” Bel’s voice came floating back, amused. “You don’t count! You get paid to dumb things down for me!” Kiem scrolled farther down the page. “This says he got a planetary award for a new fuel-injection method when he was eighteen. Do you think he could marry you instead?” “Depends. Are you going to be able to stop talking long enough to sign the contract?” Bel said, with a trace of exasperation that meant she was trying to get work done. Kiem took the hint and flopped back to lie on the couch and read. The light-screen floated over his head.”

I will probably never feel completely comfortable explaining why the writing struck a note with me or not, but at the very least here I know I appreciated that the author somehow injected humor in the story which did not have many possibilities for it, so she somehow got it within the writing if that makes sense.

The book is mostly SF romance, but setting was interesting nevertheless and politics and intrigue played huge role.

There were two chapters I skimmed, fair warning, I do not think I missed anything of significance, but as I said, want to make sure I let you know everything about the reading experience.

→ Sirius
Previous article: REVIEW: Wendy of the Wallops: The Wallops Book 2 by Gill McKnight
Next Post: REVIEW: The Missing Queen by Sally Watson