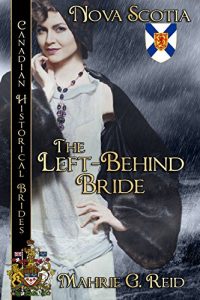 Maggie Conrad’s husband of ten days is sent overseas in WW1 and never comes home. A second suitor is lost at sea in Nova Scotia’s August Gale. Turning thirty, and on her own, she resolves to make a life for her herself and her younger brother, Ivan.

Against her wishes, Ivan goes to work for the rum runners and operates a surf boat bringing shipments ashore. When war-veteran and Prohibition Preventative agent, John Murdock, arrives undercover in the area he is referred to Maggie for room and board.

With a rum runner and a man she suspects is a policeman living under her roof, Maggie must juggle law and justice, family loyalties and her growing attraction to John as she decides whether marriage might be in the cards for her after all.

I saw this historical Canadian series set in the various provinces and territories, checked out the blurbs and decided to start with this one – which yes, I know is actually book 10. But as they don’t appear to be linked or sequential, the series was my oyster to pick from. I liked the idea of an older heroine, supporting herself, and wanting to stand on her own two feet. There is a romantic thread in the story but this is more a women’s fiction book. I also had fun learning about Nova Scotia then “oohed” and “aahed” at how pretty the pictures of it are.

My gosh these are busy, busy women. It might be a changing world but most people still believe in women doing (endless) women’s work. They keep the household running and give birth to the children but women can’t sign for bank loans plus men don’t think women can handle finances and hard stuff like that (eyeroll). As Maggie is now on her own with her younger fifteen year old brother after their father’s death, she doesn’t have the luxury of just sitting back nor does she want to apply to a relative to repay the loan. It might be an uphill climb but I liked Maggie’s determination and drive to find her own way.

The story handles how the War changed some men (Maggie’s friend Violet’s husband) which makes Maggie wonder if it would have done so if her husband had survived. Many of the families in the area have also been hit by the Sable Island August Gales of ’27 in addition to the ongoing danger of making a living from the sea. The lack of many other ways to earn a living forces Maggie to do her best at the jobs she can get. It also pushes her brother into something that Maggie abhors even as she realizes that they need the money he will earn from it.

JM’s all perfection and acts as no man does whom Maggie has ever known. He cooks, he washes up, he makes tea, he asks about her day, he smiles and makes friends with everyone but Maggie realizes that she only sees and knows what he allows. At first I was a bit baffled that Maggie treats her discovery of JM’s possible reason to be in town more as an academic exercise rather than something that could – if he’s caught – land her brother in jail.

I like how Maggie truly takes to heart discovering what *she* wants to do now that (beyond paying off the loan) her obligations to family are over. Then she acknowledges to herself that she might just be dodging the question of what she wants now. Surprisingly, Maggie gets a glimpse of a woman – in 1929! – who chose education and a career over marriage as well as support from an unlikely source who envies the choices young women are gaining.

What strikes me most is how resilient and resourceful Maggie is. If there’s a job to do, she gets on with it regardless of whether or not she’s thrilled about canning lobster or cleaning a filthy house. I love that her drive pays off in a way that will fulfill her. The romance is low key and left open but Maggie just might end up ticking all the boxes that the ladies at the quilting bee volunteer as desirable in the mythical perfect husband. B