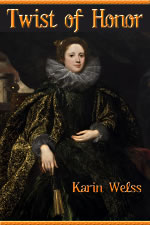 “His design was strictly honorable: to rob a lady of her fortune by way of marriage.” (Henry Fielding, Tom Jones)

It’s the spring of 1666, and Kit Fitzgeorge, a disabled mercenary soldier, finds himself in desperate straits, unable to earn an honorable living but unwilling to beg charity. To provide for his young daughter, he agrees to kidnap the young, wealthy, and widowed Countess of Cranbourne and deliver her into a forced marriage with an impoverished nobleman. Unaware of his true motivations, she hires him as her bodyguard. While waiting for the perfect opportunity to abduct the Countess, he becomes dangerously attracted to her, and finds himself forced to choose between his daughter’s welfare and an impossible love.

Before I even read your Author’s Afterwards, I immediately thought of the book you list as your main inspiration for this plot. “Broken Vessel” by Antonia Frasier opened my eyes to the fact that this was an accepted – if not acceptable – way for a (usually) impoverished 17th century Englishman to obtain a wealthy (if sometimes unwilling) wife.

Kit is such a decent and hardworking father. One wants to like him from the start and I do. It’s not that he wants to do this repugnant thing for his half-brother but the thought of his young daughter alone and helpless drives him. Meanwhile Antonia is a fiery woman not about to let men dictate her next move as shown by her spirited defense with cudgels and a dagger when some man tries it.

Both Kit and Antonia have been married before and both reflect back on happy marriages. This is always such a relief to me since the Evil Prior Spouse is such an overused character in romance books. And though both main characters have loved and lost, they aren’t mired in the – also overused – I Will Never Love Again trope.

I’m enjoying the characters and story so much that it took a while for it to dawn on me that the whole premise does have a few weak spots. Kit isn’t with Antonia the whole time all day long while they’re in London, in fact she’s at the palace with only her maid for hours and in the company of Julian. Why wouldn’t he just schlep her off at some point then? But, okay, okay the plot demands it.

There’s enough reality ewww for it to feel period without dwelling on the icky privies too much. Plague and smallpox? The impact of those diseases on these characters is beyond just skin deep. And anyone with a bit of historical knowledge about London of that year knows what else is coming.

Here is a heroine with self esteem issues from an outcome which, though common then, will never go away. Pairing her with a hero who was a mercenary for years and thus used to war wounds is perfect. He easily sees past her smallpox scarred face to the person she is and I can believe it rather than it seeming romance fairy tale.

I was wondering what would fill the second half of the book once Kit changed his mind about the bargain he had struck with his brother. Well there are slow fuses aplenty that are going off one by one as plot points raised or mentioned earlier now come into play.

Usually I’m not one for the typical romance novel “one night of love” but in this case, it really is. Kit and Antonia already love each other, have loved and longed for each other and now, with nothing to lose and truly facing a lifetime without each other, Antonia goes for it. Thinking of Bible verses as they finally get to express their love? Sure, it makes sense if she’s a Puritan. But what perfect verses she chooses. And if you don’t know the ones I’m referring to, then check out “Song of Songs.”

The tensions between Puritans and Cavaliers are still slightly simmering at this stage. Antonia is looked down upon due to her background in trade – though society is still more flexible and fluid now then in the coming century – but the main strike against her at court is her Godly reputation and insistence that she will remain a widow. Honestly I don’t think her chances of keeping that much control over her life and property would have lasted long given the need of the King to reward his impoverished followers. Still when her situation becomes public, the gleeful gossip at Court leads to social consequences a woman could face then.

Even with the monarchy restored, people could and did need to watch their social behavior. Antonia benefits from it early on as one of her importunate suitors is punished by having to publicly apologize to her in church. Later, she receives a stinging visit from the Church elders of her London parish over the scandal resulting from her association with Kit. Meanwhile another female character faces total ruin at the hands of a man.

How can this couple have a future? Are they really as backed into this painted corner as they appear to be? Well, the means and methods Kit uses and which are used for him, seem reasonable. He strives to have his relationship with his father’s family acknowledged as even being from the wrong side of an aristocratic blanket meant something then. In the end, he gets that and enough so that society will allow his marriage to Antonia to slide through without too many outraged raised eyebrows. I’m not sure about the last bit but I suppose the King might grant a lapsed title and lands to anyone he chose.

I finished this one satisfied with the romance (beginning, build-up, consummation and finale), the setting (even with the inclusion of period correct not always to female friendly elements) and the writing. I loved that Kit is such a dedicated father and honorable man in an era where honor was sometimes just lip service. I loved that Antonia managed to stay true to herself and keep working to bend her circumstances in the direction she wanted. I enjoyed the “trip” back to Restoration London and am only sorry it took me almost seven years to finally read this one. Better late than never though. B