REVIEW: Wreck of the Nebula Dream by Veronica Scott 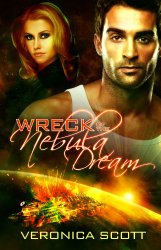 Traveling unexpectedly aboard the luxury liner Nebula Dream on its maiden voyage across the galaxy, Sectors Special Forces Captain Nick Jameson is ready for ten relaxing days, and hoping to forget his last disastrous mission behind enemy lines. He figures he’ll gamble at the casino, take in the shows, maybe even have a shipboard fling with Mara Lyrae, the beautiful but reserved businesswoman he meets.

All his plans vaporize when the ship suffers a wreck of Titanic proportions. Captain and crew abandon ship, leaving the 8000 passengers stranded without enough lifeboats and drifting unarmed in enemy territory. Aided by Mara, Nick must find a way off the doomed ship for himself and several other innocent people before deadly enemy forces reach them or the ship’s malfunctioning engines finish ticking down to self destruction.

But can Nick conquer the demons from his past that tell him he’ll fail these innocent people just as he failed to save his Special Forces team? Will he outpace his own doubts to win this vital race against time?

It was actually one of Robin’s daily news posts about the winners of the SFR Galaxy Awards that brought your books to my attention. I don’t read SFR that much so it helped to have some winners already queued up and ready to pick from. I ended up starting with this book even though it isn’t the one which won the award just because I wanted to see how the Titanic angle would work in space.

I was 4 chapters into this story when it dawned on me that I was lost in it and totally concentrating on this created world. It’s about the people as well as the tech. The story has the feel of Otherworld without ramming in my face. Not everything is space-this or synth-that. There’s enough so I know Earth isn’t the setting but the descriptions don’t get in the way of the story as so often serves to actually pull me out of narratives for this genre.

Most of the first fourth is focused on Nick alone and getting the Titanic feel. Gorgeous ship, latest tech, officious – and slightly smarmy – crew, growing hints that Nick picks up on that the ship isn’t All That that its publicity has lead people to believe and that the seemingly minor delays the crew is trying to pass off as no issue is, in fact, going to lead them down the path of destruction. But I like that none of this is highlighted in an obvious “wink, wink, nod, nod” manner.

Although he’s been attracted to a certain woman since the start of the book, she doesn’t get much page time until the major event. Then she’s front and center. Mara is smart, calm and determined to make sure that two little children in the cabin next to her are saved. Paolo and Gianna are more than plot moppets yet still used to cause the adults to need to save them at times while at others they either get the group into danger or, later on, effect a save.

The details of the doomed Titanic’s fate are cleverly re imagined in a space voyage. There are a few, “oh by the way I’m suddenly going to mention this little fact about me that will help save the situation” from Nick but he’s Special Forces so it’s not too much of an effort to believe. The sudden catastrophe, panic, and loss of morals play out and seem real. Our Brave Little Band gathers and begins to try and save themselves and who might be left on ship. And there is a looming menace that is hinted at without going into – at the time – unnecessary details.

Nick and Co encounter basically what I would expect in this scenario – and I don’t mean that in a bad way just a “the world is going to hell, we don’t know if we’re going to survive and it’s EM/WFH” kind of way. Human nature – or sentient nature in this case – doesn’t change. The clothes style might but reactions, fears and strengths remain similar.

Nick’s comments about the nature of the aliens they might be up against began to build the fear that is eventually actualized. It’s as bad as he predicted. The danger spirals up then some clever footwork saves the day. Maybe. Rinse and repeat. This is one of the major strengths of the story – the tension builds, then recedes just a little, then increases, then is countered just a bit, then smacks the reader around some more before smacking the characters even worse. And then when I think this must be it, they’re safe, right? they aren’t. Safe that is. Nick is Special Forces and heroic Special Forces guys have to act heroic and save everyone they can so wait for the end.

The romance wasn’t quite as well realized for me. For so long the story is all about Nick, Nick, Nick, Nick, Nick, Nick – then oh, they’re so attracted to each other and he would risk his life to go make sure she was safe. He’s smiled at her, exchanged a few words, thinks she’s attractive and yet is willing to risk his life for a woman he hasn’t been alone with for more than 5 minutes and there’s been no mention of love at first sight? For the most part after that, the mutual attraction is shown with only a few brief instances of inappropriate kissy face and emotions getting the best of them. Thankfully not to the point that would endanger themselves or others.

The finale is a bang up, with split second timing and possible danger lurking around every corner. Nick and Mara work together in one final push to save whom they can from a fate worse than death and deny the enemy. This was excellent and a fitting ending to the tense action adventure. After that though, the story sort of eases along to a leisurely closure that didn’t match the pace or intensity of the rest. It’s not a drastic let down but then epilogues are rarely my thing, though I do plan to keep reading in this series. B