REVIEW: The Angel of the Crows by Katherine Addison

Your steampunk fantasy novel, The Goblin Emperor, was my second favorite book of 2014 (my favorite being Station Eleven by Emily St. John Mandel). The Goblin Emperor held a tinge of melancholy, but also of hopefulness, and the balance of the two made the reading experience an act of self-care. I have now read it four times, and although it has its imperfections, I’m still very fond of it. I have a friend who has read it well over ten times, and comes back to it whenever she is in need of comfort. It’s that kind of book. 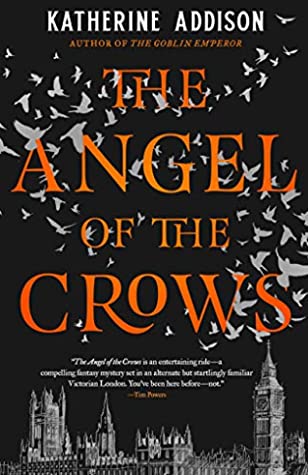 Which brings me, in a roundabout way, to your latest release, The Angel of the Crows, an entirely different book that showcases some of the same gifts displayed in The Goblin Emperor. When I heard it was coming out, I requested an ARC.

The title, The Angel of the Crows, is a misnomer. There is an angel in the book, and he bears some resemblance to a crow, and is therefore named Crow. There aren’t crows in the plural, though, so the title feels like false advertising. So does the blurb. Though everything mentioned there is in the book, the most salient fact is omitted: this is a fantastical retelling of Sherlock Holmes. Per the Author’s Note at the end of the book, the novel started out as a wingfic, a type of fanfic where well-known characters are given wings.

The book begins when Doyle, a doctor, returns to England (a fantastical, alternate version of 1880s England) aboard a dirigible. Doyle saw some action in a war in Afghanistan and was attacked by one of the Fallen (fallen angels). Few people survive such encounters, and although Doyle did, he wishes he had been left for dead. The extent of his injuries is such that he can no longer work and must instead subsist on a meager pension.

Despite his disability, Doyle manages to foil an American businessman, Enoch J. Drebber of Salt Lake City, from harassing a young woman aboard the airship. When he lands in London, Doyle is miserable. London is the last place he wishes to be, but, due to a secret he carries, the only place he feels he can manage.

London’s doctors tell him what he already knows: nothing more can be done for his injuries. He does not tell them something else: he is no longer quite human. The Fallen’s attack changed him into another kind of being. What, exactly, isn’t made clear to the reader for a long while.

The cost of living in London is steep, and Doyle is running out of funds. He lucks out one day, though, when one of the men with whom he studied medicine introduces him to Crow, an angel, and suggests that they might suit each other well enough to room together.

Not long after Doyle and Crow move in together, Crow is called by the police to help investigate the scene of a murder. Doyle comes along and recognizes the dead man’s body. He is none other than Enoch J. Drebber, the revolting Salt Lake City businessman Doyle encountered on the airship. Soon Doyle is attending other crime scenes and becoming enmeshed in Crow’s penchant for mystery solving.

Crow is the character inspired by Sherlock Holmes. He loves puzzles and is obsessed with them, poring over newspapers day and night (angels don’t need sleep) to track investigations. He helps the police with tough cases when they request his help and grouses when they do not. Crow is more perceptive than the police, but there are big gaps in his knowledge when it comes to things like what human beings consider polite. He always means well, though.

Doyle is the Watson figure. He is irascible and very vulnerable, because he believes that if the full truth about him were known no one would accept him. He fears Crow will discover everything. Still, Crow is so kind (though at first it’s not clear whether his kindness is a mannerism or motivated by genuine empathy and liking) and Doyle is so lonely that Doyle cannot help but get closer to Crow, like a shivering man nearing a warm fireplace.

Through this acquaintance, Doyle becomes more than a sounding board for Crow’s crime solving. He starts to observe clues and think through what they might mean, and he gets better at this. Not every mystery in the book is solved by Crow, although Crow solves most of them and is better at deduction than Doyle.

There is a bit of mystery about Crow as well. He doesn’t look like other angels and whereas most angels need a habitat to survive and cannot leave their habitats, Crow has no habitat and can come and go as he pleases. Eventually we learn why.

The main, overarching plot of the novel is about Crow and Doyle’s relationship and how it develops from that of strangers who room together to that of close, loyal friends. This is touching and heartwarming and in that way, reminded me of The Goblin Emperor. The other part of the overarching plot is a search for a man who has been murdering and carving up prostitutes, dubbed Jack the Ripper. That investigation gets grisly, but the tenderness of Crow’s friendship with Doyle is a buffer from the horrifying aspect of the violence. The lovable nature of Crow and Doyle comes through strongly in these sections.

Within this overarching plot, episodic subplots are clustered and each involves a different investigation. These are heavily influenced by Arthur Conan Doyle’s original Sherlock stories, except that fantastical elements are woven into them. So for example, the dead Lucy in the book’s riff on A Study in Scarlet is an angel, and the hound in the episode patterned after The Hound of the Baskervilles is a hellhound.

There are seven or eight of these episodic subplots, and they hew so closely Arthur Conan Doyle’s Sherlock Holmes novels and stories that I honestly wonder whether, if Arthur Conan Doyle were alive today, he could win a lawsuit on grounds of plagiarism.

The Angel of the Crows is set in 1880s London and a lot of research has been done into the time period. The worldbuilding is marvelously good, as in The Goblin Emperor. There are a lot of details about angels and other fantastical creatures, and about how the angel subculture and society work.

I won’t go into the details due to spoilers, but the world is intricate and seamless, and it reads like there is a lot more to this world than what is on the page because the details feel real and tangible. Every aspect of the world is thought through. The actual and the fantastical mesh really well.

The characters are as wonderfully endearing, and there are queer elements I don’t want to say too much about because parts of the pleasure is in their discovery. I’m no expert on these but I liked the way they were handled.

Although I loved the development of Doyle and Crow’s relationship, The Angel of the Crows feels less substantial than The Goblin Emperor. The Goblin Emperor explored the conundrums presented by a desire to lead a nation well. This was a smaller scale novel, and while it contained social commentary (particularly with regard to its queer aspect and to other forms of bigotry), the narrower scope gives readers less to chew on. Probably that is also due to how closely the novel clings to Sherlock. That gives it less room to diverge and dig into the world.

I loved the characters, though. Doyle’s vulnerability made it easy to understand his irascible nature and empathize with his secret burdens. Crow really is a dear, a lovely person. Though at first Doyle doesn’t know if angels are capable of caring deeply about other people, Crow shows that he cares very much (not in a romantic way). There are some aspects of Crow’s personal history that are only hinted at and while I was curious to know more, after thinking about it, I realized that this was just the right amount to know about them.

The resolution to one of Doyle’s dilemmas slightly marred the ending for me.

Doyle is given into Crow’s custody and stewardship in a long-term arrangement (there are hints that a chance to overturn the law that requires it may come at some point in the future). Though I trusted that Doyle would remain happy nevertheless, and that Crow would never abuse this power, I didn’t like to see them bound to each other for the foreseeable future when this might not be what they would have chosen had the pressure of systemic bigotry not been brought to bear. After all the attention the book gave to justice and to human rights, this was not my idea of a triumphant ending.

It also read like the novel had been written into a corner.

I enjoyed the book very much, but I had not read Arthur Conan Doyle since elementary school and I’m certain that was a factor. I didn’t remember the Sherlock plots, only the characters, and even that vaguely, so the plot turns in The Angel of the Crows came as a surprise to me. I read some Sherlock Holmes entries on Wikipedia after I finished the book and was disappointed to realize just how much was taken from Arthur Conan Doyle’s novels. I enjoyed the book but advise fans of Sherlock Holmes to proceed with caution. B.