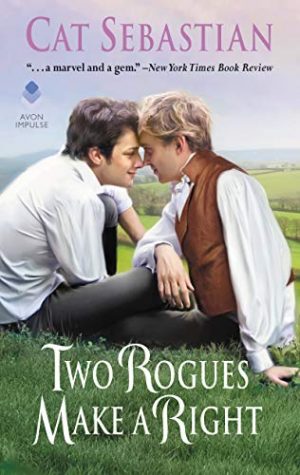 I enjoyed A Gentleman Never Keeps Score when it came out – although the first book in your Seducing the Sedgwicks series, It Takes Two to Tumble, languishes on the TBR of Doom (I really must get to it) – so I was keen to read Two Rogues Make a Right.

In A Gentleman Never Keeps Score, Will Sedgwick was a secondary character, who was desperately looking for his friend Sir Martin Easterbrook. By the end of the book (spoiler alert) Martin had been found but was very ill.

This book picks up shortly after, when Will has virtually abducted Martin and taking him to the countryside to live in a small cottage and attempt to nurse him back to health. Will and Martin grew up together and, while their mutual family dynamic is somewhat fraught and complicated, they have always been best friends who care deeply for one another and who would do anything for each other. They spend months together in the country as Martin regains as much of his health as he can and grow even closer in the meantime.

Will is bisexual but has never let himself think of Martin in a sexual way. It seems that he has not much thought about romance in general, regarding sex as casual fun, physical pleasure but not so much about the heart. Martin, it seemed to me was somewhere between gray-ace and demisexual (but I am certainly no expert so please feel free to correct me in the comments and I will update as necessary). He came across to me as being sexually attracted to Will specifically and relatively uninterested in sex otherwise. However, due to his horrible father being horrible and for various reasons, he also feels he doesn’t deserve sexual pleasure and has denied it to himself and this is part of why he has never made any moves to change his and Will’s relationship into a physical one.

It was also clear to me that Martin’s heart was deeply engaged from the beginning and that he also understood that Will didn’t see sex as being much about the heart and so there were hints and glimpses that Martin may not want to go there with Will for it only to be casual fun for Will and deeply meaningful for Martin.

That said, it was also obvious that Will and Martin both loved one another dearly and were attracted to one another so it was only a matter of time before their proximity (and only one bed!) broke down those barriers and allowed them to see what was before their eyes. The conflict in the book, such as it was, was about how they could be together and here, it was more about finances than marriage equality and bigotry (although that was a factor, it was not of significant concern).

Martin has been “sickly” all his life but at some point he seemed to have also contracted tuberculosis. He’s worried that loving Will and wanting a life with him, if they can find a way to have it, will short-change Will because it is unlikely his lifespan will be long. Will doesn’t give two figs about that though. Some romance readers may not share this view I suppose. In some respects it could be said that the HEA is somewhat uncertain but it didn’t bother me in this book because Martin wasn’t imminently dying and, as you point out quite cleverly in the story anyway, the HEA is a fantasy we all subscribe too but it’s not like everyone lives forever or never has any problems or dies in their sleep with their partner at the exact same moment or anything. For Martin and Will that fantasy is perhaps a little harder to believe but it is as much an illusion as for anyone else really. I mean, we don’t want to think it (and I feel like I have to wash my fingers with bleach after I type this) but the main characters could be hit by a bus or a spaceship or a runaway carriage [insert universe appropriate death-dealing device here] immediately after the HEA but we romance readers all pretend this cannot and will not happen.  Also, as you said in your recent newsletter, people with chronic illness deserve a HEA too. I agree.

Will has a history of opium addiction and this is something he realises he will have to resist for the rest of his life. However, he is doing a lot better and it’s clear that Martin was a large part of the start of that. Will doesn’t depend on Martin for his recovery however. I was a little fuzzy on exactly what happened to Will when he was in the navy. Perhaps there are details in that first book I really need to read?

Two Rogues Make a Right is a quiet book, very introspective with not a lot of conflict. The two men already love each other and understand each other. There are some small misunderstandings but nothing of the annoying type. Each man tends to ascribe good and/or accurate motives to the other even when they disagree. The story is character driven but not a page-turner full of action. Like many (most?) books, to be it’s most successful it needs to be paired with the right reading mood. Two Rogues Make a Right is comfort and cozy, yes blended with some harsh realities but for the most part it is a warm weighted blanket rather than a wild ride.

→ Kaetrin
Previous article: REVIEW: The Angel of the Crows by Katherine Addison
Next Post: REVIEW: The Chase by Elle Kennedy