REVIEW: Coins in the Fountain by Judith Works 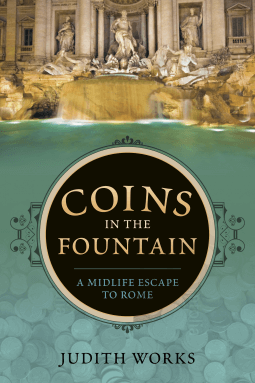 With middle age looming, Judith Works decided it was time for a change. But after graduating from law school at the age of forty-seven, she still faced the question “What now?” Casual conversations about far-off travels with husband Glenn became a reality with the offer of a dream job at the United Nations in Rome, Italy.

Coins in the Fountain brings to life the challenges of acclimating to the beautiful and chaotic ancient city of Rome. Works shares her struggles of learning the arcane rules and folkways of the UN while Glenn begins his valiant effort to cook Italian-style, as they both endeavor to embrace la dolcevita. With an extraordinary count and countess for friends, dogs in the doctor’s office, snakes and unexploded bombs on the golf course, along with a sinking sailboat, the unexpected was always just around the corner.

Through wit, wry humor, and enticing descriptions of food and travel adventures, Works takes you on a journey into the heart of what it is truly like to live in the Eternal City. According to Roman lore, if you toss a coin over your shoulder into the famous Trevi Fountain, the gods will grant you a return trip. When it was time for them to leave, Works made that hopeful toss of a coin and her wish was granted.

Always a traveler, Judith lost husband No 1 in Rome during her first foray there – the suspicious phone calls home clued her in on his infidelity – and had never thought to go back. But … after hearing a colleague’s wistful and loving tales of Rome she begins to rethink her initial impression of a hot, dirty city with insane drivers. So in a WTH moment, she applies for the UN position and OMG gets interviewed even though the job interview was like a Christian thrown to the lions.

Having survived her grilling by interview and waited on the leisurely pace of FAO hiring, she and her husband are faced with a choice. Pass up the job and go back to whining about boredom in Oregon OR take a chance and a leap of faith. Go big or go home. They go for it. Then follows the usual “getting used to a new place and a new language.” But hey, it’s Rome!

Judith has to learn not only two new languages – French being by far the most common UN language after English and Italian, well that’s obvious – but also UN speak for the legal documents she writes. The FAO office building was a cornucopia of different traditions, habits, and décor from around the world. Then there was the history lessons to be gained merely by walking to lunch and seeing ruins and monuments from the Roman Republic through Mussolini. While in France it’s the labor laws that strike fear, in Italy it’s banking: banker’s hours, banking strikes, tellers with lifelong jobs who could care less about your money and when you get it. Dodging drivers who seemed to consider pedestrians to be targets appears to be the same in both countries.

Ah but the weekend jaunts around Italy to sleepy villages with their own wine and medieval towers. The pasta that tastes just right. Judith and her husband sometimes had a love/hate relationship with Rome but the positive far outweighed the negative and when their contract was up, neither wanted to leave. But they had to given pension plans and lengths of service. Bill paying life and modern kitchens were smoother back in the US but both longed for the people and places of Italy. After three years back in the States fighting Italian fever, the coin tossed in the Trevi brought them back.

This time the job was different and involved more hands on work for Judith with UN personnel in dangerous situations – Rwanda or Uganda in the 1990s. Repatriation of bodies and payments to surviving family members brought home the risk UN workers confronted daily. Another job of hers was to visit various locations where UN WFP food efforts were underway not only to monitor the supplies and distribution but also to speak with UN workers to assess their needs in the face of the violence, famine and poverty which made the efforts needed. She ruefully acknowledges that while she lives for travel, she’d never have what it takes to make it as an aid worker.

Boundless Italian graciousness is what they and Judith find after returning to Italy and from her UN trips. Reading the descriptions of the luscious food readily available (she notes the irony of her UN job and living in Italy amid the bounty) made my mouth water and my stomach growl. I agree with the cats and mice of Rome – I love pasta too. Though she mentions weekend and weeklong visits all around Italy complete with the wonderful and timeless things they saw, Works knows that it would take a lifetime to try to attempt to see everything.

“Coins in a Fountain” is a love letter to travel in Italy’s timeless dreamscape and scenery and appreciation of the culinary delights the country almost carelessly but bounteously offers up. Like all who love, Judith can be negative about some aspects of her time there but overall, it’s clear she and her husband relished their time in Bella Italia. B