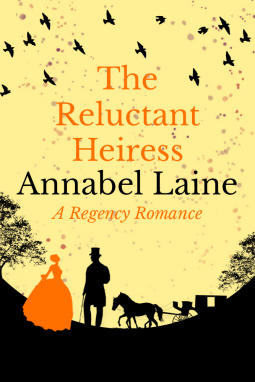 Secrets only get darker with time…

The Earl of Moriston is an aristocrat, diplomat and occasional detective. When his lordship first meets the ravishing Caroline Malcolm, he is taken aback by her reaction to him. She turns as white as the ribbons that trim her elegant muslin gown, and looks as if she is about to faint from shock.

Unable to ignore a promising mystery, and by no means impervious to Miss Malcolm’s charms, he soon finds himself embroiled in events that prove to be much more stirring than he bargained for. Aided, and sometimes impeded, by a vivid array of characters — including his caustic sister and exuberant younger brother — the earl perseveres with his investigation despite all opposition.

Even his provoking client, Miss Malcolm, considers him arrogant, autocratic, and secretly irresistible. When his lordship stumbles across a splendidly devious plot involving priceless diamonds, suspicious ‘accidents’, and secrets that have been closely guarded for more than 20 years, a whole new world begins to emerge…

The Reluctant Heiress is the perfect combination of heart-warming romance and thought provoking mystery.

“The Reluctant Heiress” actually starts with a slice of life view of the hero, the Earl of Moriston a man of many talents, as we’ll see. He amuses himself with observations on his family, neighbors and his head groom. He also has a penchant travel, politics and solving mysteries that intrigue him. As the book progresses I realize that it will be something different, a plot that unfolds a little at a time rather than having everything laid out from the outset.

Caroline Malcolm – she of the flaming hair but thankfully controlled temper – already knows of the Earl before she meets him because her honorary Uncle Wellington recommended him as the eccentric man to help solve the mystery of her mother’s death and of her own origins. Plus there’s the 21 perfect diamonds one of which was sent to her yearly since her birth. The Earl is that person to whom others turn when they need something done, found out or solved and Caroline and her brother certainly have all of those issues. When presented with the newest inquiry, he points out to Caroline that there are some things better left alone as often people discover skeletons they’d wished undisturbed. But Caroline is no shrinking ninny.

Something which might be a deal breaker for readers is the fact that the Earl and Caroline are separate for much of the first 1/3 of the book. We see some neat and interesting stuff about agriculture, the British East India Company and other aspects of life in England beyond Almackistan and the London Season though. But the times that they are together the Earl’s changing feelings are subtly shown in his responses to Caroline’s reactions to the updates on her case.

Written in the late 1970s when heroines were not expected or portrayed to be quite as independent as now, Caroline might come off as uninvolved in helping the investigation. But I feel that she is shown perhaps more as a woman of the day would have been – also the Earl’s sister Susan – capable, smart and often annoyed by their menfolk shielding them and perhaps keeping things from them “for their own protection.” Thus she’s not in the book first hand as much as the Earl is but he is very conscious of her the whole time. I had great fun trying to figure out the myriad questions even as the characters tackled them. The clues are mainly there – with the help of the memories of some of their relations – and I liked that the questions are answered more by hard work, deduction and reasoning than any sudden bolt of deus ex machina.

As a romance this one is subtle and underplayed to the point of almost invisibility but as a Regency Cozy it’s an interesting twisty/turny mystery to play along with solving at home. B