REVIEW: Miss Goodhue Lives for a Night by Kate Noble

I’ve enjoyed the first two books in your Winner Takes All series, The Game and the Governess and The Lie and the Lady, so when I saw that a novella about Cecilia Goodhue, a minor character in the second book, was available on Netgalley, I requested it. 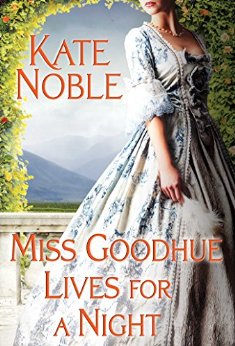 Twenty-six-year-old Cecilia Goodhue has lived with her sister Imogene, a vicar’s wife, in the small Lincolnshire town of Helmsley, since the scandal that was almost her ruin when she was only sixteen. The scandal did ruin her life in Manchester, from where she hails, but in Helmsley no one is the wiser.

But now Cecilia’s younger cousin Eleanor has run off with a dashing young man. All that is known about Eleanor’s suitor is that he was part of a regiment that stopped in Manchester, and wore a blue coat as part of his uniform. Cecilia’s Uncle Robert, who lost the use of his legs in a riding accident years earlier, tried to follow his daughter and the young man, but lost their trail in London.

Robert was forced to return to Manchester, and the rest of the family has given up on Eleanor. But Cecilia cannot. A decade ago, she made a similar mistake, running off with a suitor, only to learn, when her father and his uncle caught up to them just as they were about to spend the night together, that her young man was only after her dowry.

Since then Cecilia has lived an exemplary life, teaching at the Helmsley school and enduring Vicar Spilsby’s disapproval. Cecilia cannot allow a worse fate to befall Eleanor, and she decides to pursue her cousin to London to prevent that.

Through her friend Letty Turner, Cecilia receives an invitation from the Earl of Ashby, to stay with him and his countess in London. Cecilia is intimidated, but agrees. Being the kind of woman who cannot say no, she also agrees to run errands in London for a number of Helmsley’s residents.

Once in London, though, it becomes hard to remember those errands, because Lord Ashby’s attorney, Theo Hudson, is also there, and Theo is the man who almost ruined her.

At the age of twenty, Theo was visiting his uncle in Manchester when he met sixteen-year-old Cecilia. From that moment on, they had eyes only for each other. One day, though not yet finished with his schooling, Theo half jokingly asked Cecilia to run off with him. She accepted his proposal enthusiastically, but they didn’t make it to Gretna Green. Instead his uncle found Theo, and he discovered that Cecilia was only with him from avarice.

In the ten years that have passed, Theo has built a blameless and commendable but lonely life. He hasn’t allowed himself to wonder what happened to Cecilia in the time since. But now instead of feeling glad that she was punished he finds himself more sympathetic toward her than he wants to be.

When Cecilia describes her cousin’s situation to Theo and to the Earl of Ashby, and the earl offers to engage bow street runners to ask the Horse Guards about the regiments that wear blue coats, Theo volunteers to go there instead. Of course, Cecilia insists on joining him.

Will Cecilia and Theo rediscover each other as they search for her cousin Eleanor? Will Cousin Eleanor’s predicament be resolved happily? Can Cecilia and Theo leave behind their sober, respectable lives and allow themselves to feel joy again? Can they renew their love and trust?

Amazon lists this novella as 109 pages long, but it feels shorter than that. If I have a main complaint, it’s that it feels too short. I won’t spoil the reason for Cecilia and Theo’s misperceptions, but longtime readers in this genre aren’t likely to be surprised by the cause of their conflict.

In a story that uses a familiar plot, it is all the more important that the characters feel fresh and three dimensional. With regard to fresh characterization, I was mostly satisfied. A spinster heroine who lives with her sister and brother-in-law and has to tolerate their disapproval due to a past scandal isn’t something I encounter that often, and I liked Cecilia.

I liked her arc from the woman who allowed the townsfolk to take advantage of her kindness to someone who decided to do something she would enjoy for a change, too (This was a nice homage to Miss Pettigrew Lives for a Day; I’m basing this statement on having seen the film adaptation).

Theo’s sober and restrained attorney background was also somewhat different, though not as much. But his character was less fleshed out and that was a big part of why I wanted the novella to be longer.

The romance too feels underdeveloped. Theo and Cecilia’s courtship as youngsters takes up only a few pages and in the present day storyline, there was just enough time for them to realize they’d been mistaken in their earlier impressions and that they still liked and were attracted to each other. We never got to see them get to know each other all over again as adults and the renewed courtship near the end felt rushed as a result.

Cecilia’s change of heart regarding Theo comes almost out of nowhere and toward the end of the novella, she decides to sleep with him under the earl’s roof. This may have been intended to show how far she’d come from the woman she was in the beginning, but given how she’d suffered for her youthful indiscretion, a little bit more caution would have been more in character.

There were points in the novella in which I was moved, and the black moment even made me shed tears. Still, I ended up feeling that this novella needed more meat on its bones. Because I liked Cecilia and the writing, I’m giving Miss Goodhue Lives for a Night a C+.